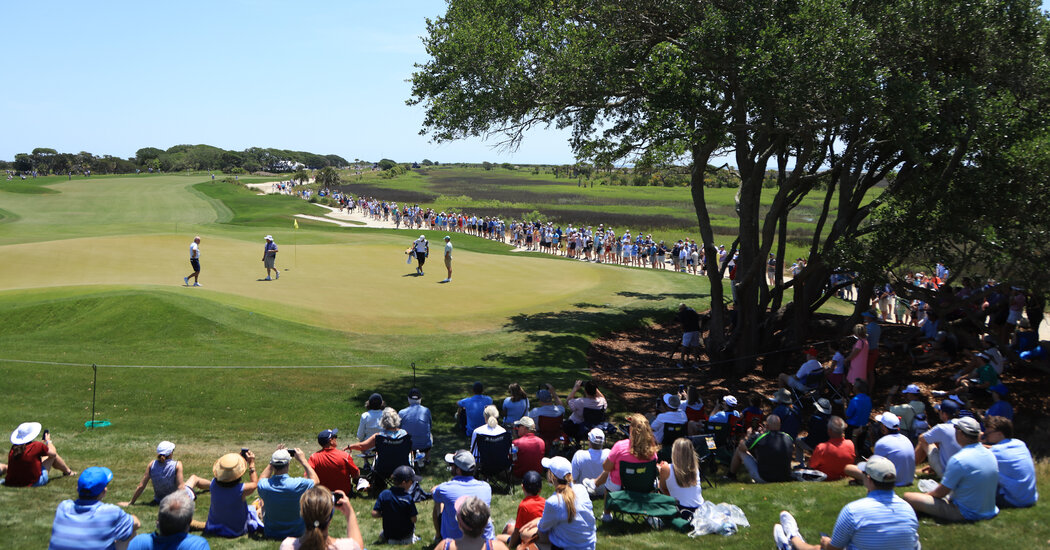 KIAWAH ISLAND, S.C. — The P.G.A. Championship is returning this week to the Ocean Course, a daunting place rich in golf lore. Despite the course’s almost spiritual status in the sport — “The Legend of Bagger Vance” was filmed there — this will be only the second major championship held on the site.

Pete Dye, who with his wife, Alice, began work on the course at Kiawah Island in 1989, never questioned whether his creation would be one of a kind. In 2012, as he walked the course one quiet evening a month before the P.G.A. Championship that summer, he stopped to wave a hand across the windswept landscape, where the crash of ocean waves is an ever-present soundtrack.

“It is the only course we built that walks and swims,” Dye said. “It is of the land and it is of the water.”

Head down, Dye marched about 10 strides, then turned to add, “You can go from Miami to New York and you won’t find a golf course like it on the Atlantic Ocean.”

The P.G.A. Championship’s return to the Ocean Course has been made more poignant by the deaths of Pete last year at age 94 and of Alice in 2019 at 91. The Dyes, who were married for nearly 70 years, were golf architecture royalty: Pete as the most influential designer in the last half of the 20th century, and Alice as his constant partner who became the first female member and the first female president of the American Society of Golf Architects.

Their work at Kiawah Island symbolized their bond. During one of the couple’s surveys of the property as the final nine holes were being laid out in 1991, Alice said: “Pete, I can’t see the ocean on this nine. I don’t want to just hear it, I want to see it.”

The fairways were raised several feet, which provided more than an upgraded view. Elevated fairways exposed the closing holes to seaside winds so fickle that they bedeviled the charging, or fading, tournament leaders. The gusts have become a hallmark of the endlessly memorable course.

The Dyes will be missed this week at the masterpiece they created, but their presence will be felt, even by those who were toddlers when the course made its debut.

Webb Simpson, who is ranked 10th in the world, did not make the cut at the 2012 P.G.A. Championship, but he left Kiawah Island forever impressed.

“I did not play well, but I didn’t blame the golf course,” Simpson, 35, said in an interview this month. “I loved Kiawah. I remember leaving in ’12 and thinking it was like a British Open course where you have to trust your lines over corners, over bushes, over marsh. There’s a 66 or an 80 out there every day for any golfer, which is exciting for a major.”

Keegan Bradley tied for third at the 2012 P.G.A. Championship, which was won by Rory McIlroy. Bradley, 34, believes the Ocean Course’s relatively rare appearance on the calendar of elite golf events is part of its appeal.

“It’s not a major championship venue that we go to every five years,” said Bradley, who won the 2011 P.G.A. Championship. “It’s become a special place for us to go.”

The Ocean Course was not always held in such regard.

Seated in matching white wicker chairs at their South Florida home during a 2011 interview, the Dyes recalled the course’s earliest days.

“I saw its future the moment I got there, even if there was nothing but myrtles and ugly bushes,” Pete said. He laughed. “Of course, the first time the P.G.A. folks saw the land they almost threw up.”

Then Hurricane Hugo blew through the southeastern United States in September 1989. Kiawah Island was declared a national disaster area. At a 1990 news conference for the 1991 Ryder Cup, Pete was asked where he planned to put the huge galleries of fans expected to attend.

“Galleries? How do I know?” Pete answered. “We don’t even have holes yet.”

Alice’s memory of the day was slightly different.

Alice and Pete later agreed that Hugo had oddly helped their project. It ruined the work already done on several holes, but the destruction gave the Dyes the opportunity to rebuild sand dunes and other natural elements to their liking. Flood lights were set up so work crews could put in 16-hour days to get the course ready in time.

The course revealed to the golf world ahead of the 1991 Ryder Cup was stunningly beautiful. Playing it was less than pleasant. David Feherty, a television commentator who was on the European Ryder Cup team that year, called the course “something from Mars.”

The competition, won by the American side after three exhilarating days, became the most famous Ryder Cup, in part because of the treachery of the finishing holes at the Ocean Course. The television ratings for the event eclipsed those of that weekend’s N.F.L. games, a first for any golf competition.

The Dyes’ creation at Kiawah Island immediately climbed near the top of the rankings of America’s best courses.

But it was always impossible for the Dyes to choose a favorite among the more than 100 golf courses they designed.

“We think of them like our children,” Alice said, “not pieces of history.”

This week, the Ocean Course, after nine years on the sidelines of major championship golf, will take another turn in the spotlight. And with it will come another chance to appreciate the brilliance of Pete and Alice Dye, a golf team like no other.