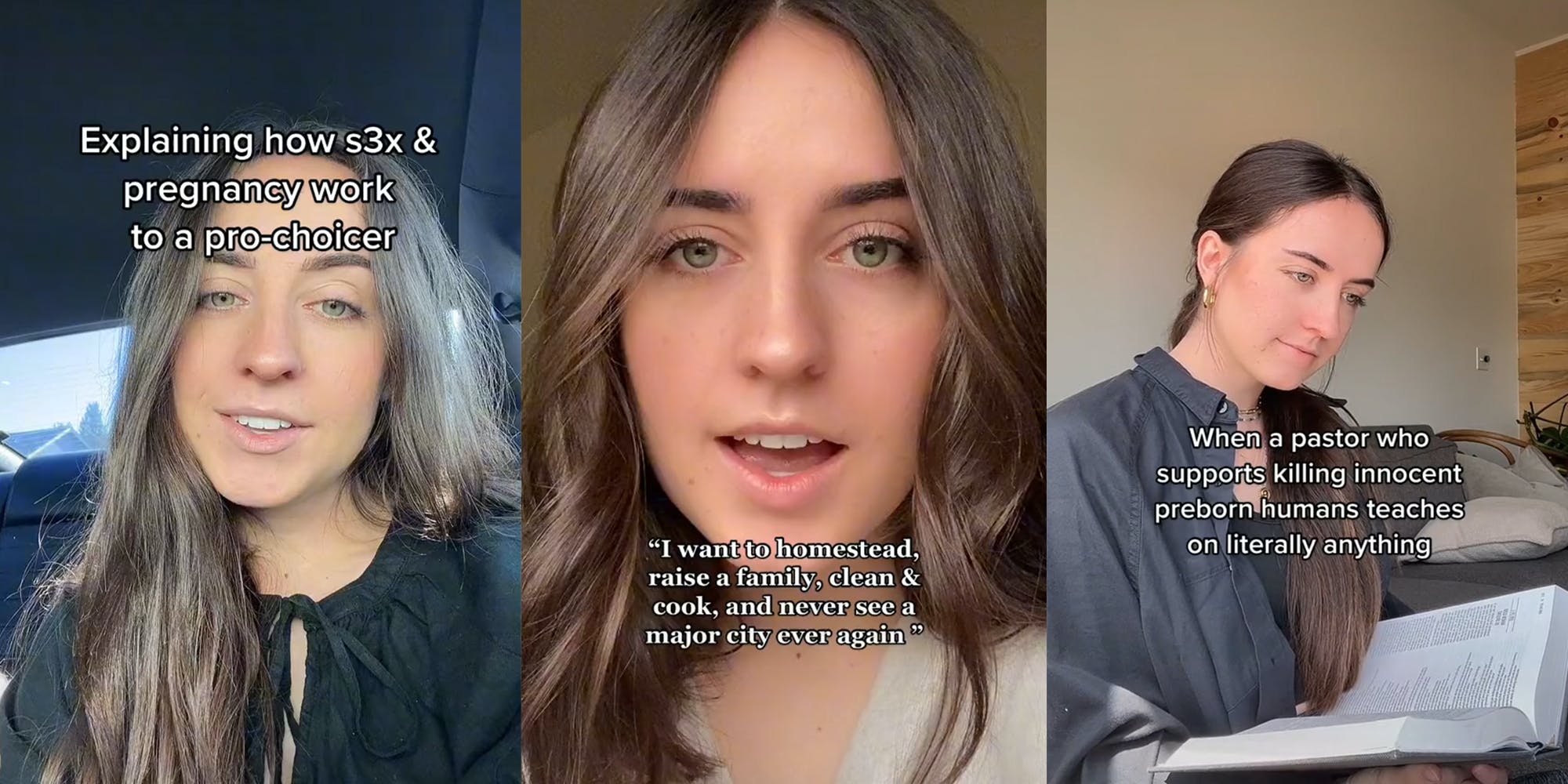 On TikTik, the hashtag #gettingoffbirthcontrol has 2.6 million views. Another, #naturalbirthcontrol is over 34.1 million. It’s proof of a new trend, with young women across the site sharing their negative experiences of hormonal birth control and advocating alternative, “natural” methods to prevent pregnancy to their tens or hundreds of thousands of followers.

While the pill has its problems, some of these creators are capitalizing on unpleasant side-effects to push products and services, marketing masquerading as a movement.

And genuine concerns about birth control are being co-opted by pro-life, Christian TikTokers, who have hopped on the hashtags to further an anti-abortion agenda.

Whatever awareness the natural birth control TikTok is raising is being wiped away.

Britta Grace, 24, posted a video detailing all the ways her life had improved since coming off hormonal birth control. She felt like she “woke up from a dream” and had “clarity,” after years of “weird birth control fog.” All of her mental health issues subsided, her depression got a lot less severe and her anxiety let up. Another creator, Sophia Panella (380,000 followers) made a similar series of videos about the side effects of birth control and advocates “natural family planning” instead. “Cycle awareness coach” Nat champions “preventing pregnancy naturally” with the hashtag #fertilityawareness.

Many of these videos take the form of testimonials about personal experiences, worsening TikTok’s identity as a hive of medical misinformation and toxic wellness culture. From the relatively benign “healthy coke” and “internal showers,” to the more insidious anti-vax content and “crunchy mom” creators peddling conspiracies, the site is full of videos advocating alternative and individualistic approaches to health and wellbeing, approaches that often emphasize the importance of “nature,” non-interference, the dangers of drugs and the professionals who supposedly peddle and profit from them.

An aversion to hormonal birth control aligns with a broader cultural trend. In a world where women are increasingly and acutely aware of their bodily autonomy, and its legislation and erosion, it is easy to understand why many are drawn to the admittedly loose and imprecise notion of “getting to know your body” and doing so “naturally.”

Indeed, while these testimonials have been denounced as “fearmongering” and spreading “hormonophobia,” (an excessive fear of hormones based on an “overestimation of health risks with their use”), the trend does reflect a very real shortcoming in women’s reproductive health care and research.

When the female birth control pill first became available in the 1960s, it was greeted by many as a feminist triumph that allowed people to control their fertility and manage conditions like endometriosis and hormonal acne. But despite these benefits, researchers acknowledge that the pill and other forms of birth control like IUDs can also cause multiple unpleasant side effects. These side effects are often not communicated or taken seriously by doctors. Like many creators, cycle awareness coach Nat told the Daily Dot that she takes issue with the tendency for the pill and other hormonal methods to be offered by healthcare providers as the only way to prevent pregnancy. These creators see their content as crucial awareness raising.

Studies have found links between the pill and increased risk of depression, decreased sexual desire and libido, and high blood pressure, blood clots, and stroke. These side effects frequently have a major impact on quality of life and the World Health Organization reports that up to one-third of women stop their contraception in the first year of use.

There is also very little research into making new and improved forms of hormonal birth control. Between 2017 and 2020, there were only 23 industry-funded clinical trials into contraceptives, compared to 600 for cardiovascular drugs and 140 for treatments relating to eye disorders.

There’s no doubting hormonal birth control has its flaws.

Creators are exploiting that, using people’s negative experiences to sell their products and services. Nat is not the only “cycle awareness coach” using claims about pill side effects to sell courses, private consultations, and “cycle tracking charts.” Kait is a “hormone practitioner” selling supplements and a mysterious “fertility awareness method resource.” Audrey, a “holistic health coach,” offers “tips and recipes to lower stress, heal your hormones, and nourish your body!”

Tara Scott MD, an “integrative GYN” with over 500,000 followers, goes by “Hormone Guru” on TikTok, where she sells online courses on “How to Revitalize Your Hormones” for $249.

Even more concerningly, many of the TikTok creators promoting non-hormonal methods of birth control have links to religious and anti-abortion activism. Much like the people using birth control side-effects to sell supposedly transformative courses, Christian creators exploit the negative consequences of the pill, and co-opt the language of female empowerment, “natural” healthcare, and medical misogyny to push their own agendas. Lara Freidenfelds, Ph.D., author of The Myth of the Perfect Pregnancy: A History of Miscarriage in America

Advertisement
told the Daily Dot that while Catholic advocates for fertility awareness or the rhythm made might not have explicitly teamed up with feminist critics of hormonal birth control, “they have picked up the critiques and incorporated them into their own arguments about what is ‘natural’ and ‘healthy.’”

Sami who has 236,000 followers and “advocate for the preborn” in her bio, has an entire playlist dedicated to “Fertility Awareness” where she rails against “synthetic hormones” and the profit-driven “birth control industry.” Evelyn, 65,000 followers, criticizes hormonal birth control for “entirely changing” the way you experience the world, and says its “patriarchal to tell women their fertility is a disease.”

To the casual viewer, both creators have much in common with the thousands of other young women talking about their pill side effects, but anti-choice rhetoric is peppered throughout their videos,

Sami [incorrectly] refers to the pill as an “abortifacient”, and Evelyn has an entire “pro-life” playlist. As Katherine Dugan, Ph.D., Associate Professor of Religious Studies at Springfield College explained to the Daily Dot, there is “overlap between the ‘crunchy’ folks who avoid artificial birth control and Catholics who practice Natural Family Planning.”

These creators are part of a “lineage of lay Catholics offering advice about how to mesh the modern ideal of a sexually active and intimate marriage with Catholic rules about contraception,” Dr. Freidenfelds said. Anti-choice OB/GYN organizations have been promoting the so-called health dangers of contraceptives for a very long time.

Now, they have the amped-up algorithm of TikTok to help it spread.

The creators who advocate coming off hormonal birth control are often vague about what people should do instead. Some suggest “natural methods,” which involve monitoring and recording different fertility signals during a person’s menstrual cycle to work out when they’re likely to get pregnant. There are apps that make this job easier, like Natural Cycles, which got FDA approval to market itself as a contraceptive back in 2018 and claims a lower unintended pregnancy rate than the pill when used perfectly.

If, however, these creators and their followers are opting for “natural” alternatives like cycle tracking, they need to be careful. As Planned Parenthood told the Daily Dot, “Some birth control methods are more effective at pregnancy prevention than others” and while fertility awareness methods are “safe, inexpensive ways of tracking ovulation,” they are “less effective in preventing pregnancy than other types of birth control including IUDs, the implant, or permanent birth control.” Some creators, like Sophia Panella, take care to insist that people do their own research. She told the Daily Dot that anyone considering coming off the pill should speak to their healthcare provider.

Natural family planning, with or without an app, requires care, diligence, and following instructions to the letter. And even then it might not work. According to Planned Parenthood, these methods aren’t as effective for people with “irregular menstrual cycles, people who can’t track their fertility signs daily, and those with certain medical conditions such as thyroid disorders.” According to the CDC, the failure rate is up to 24%.

The combination of this TikTok trend with these figures is particularly concerning against the backdrop of Roe v Wade’s repeal. The risks of an unintended pregnancy in many states in the U.S. are now much greater, and the need for effective birth control has only risen. Having eroded abortion rights, the GOP insists that contraceptives won’t be banned next. But in July, 195 Republicans voted against a House bill codifying the right to contraceptives into federal law.

Creators promoting “natural” methods have many different motivations. Some might find common cause with these politicians, both of them interested in preventing women from accessing both birth control and abortions. Others—perhaps only in pursuit of a lucrative side-hustle—are unwittingly playing into the hands of the Christian Right. And their contributions to TikTok’s “wellness” culture might have tragic and unintended consequences.