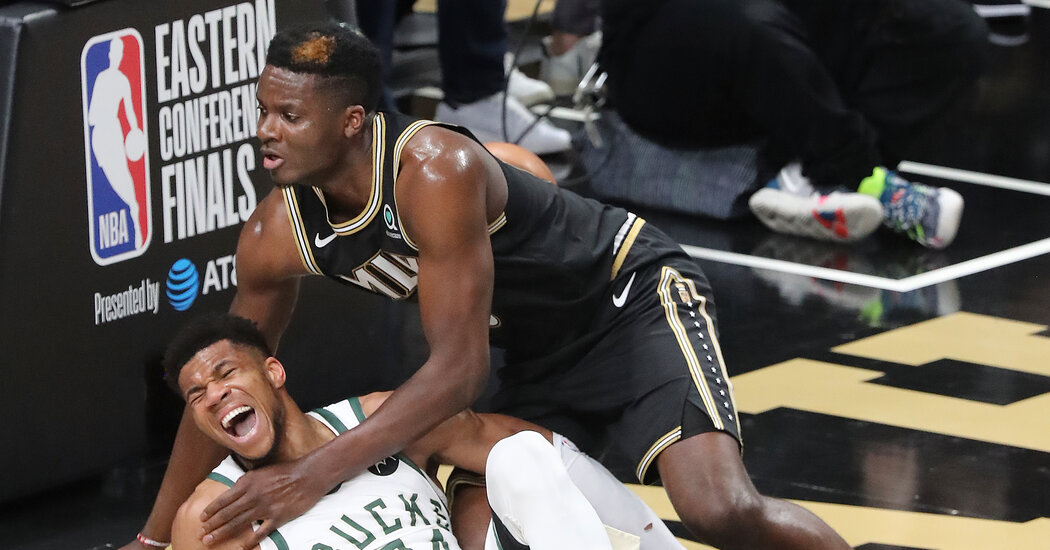 The Milwaukee Bucks were in the midst of a comeback on Tuesday against the Atlanta Hawks, who were without their best player, Trae Young. With the Bucks up two games to one in the best-of-seven Eastern Conference finals series, a win would have put the franchise on the brink of making its first N.B.A. finals since 1974.

Then a nightmare scenario unfolded in the third quarter: The Bucks’ star and one of the league’s best players, Giannis Antetokounmpo, landed awkwardly while trying to defend an alley-oop dunk and crumpled to the ground, holding his left knee and writhing in pain. He limped off the court with the help of his brother and teammate, Thanasis Antetokounmpo, and did not return.

The Bucks lost the game, and it’s not clear if Giannis Antetokounmpo — who, the team said, has a hyperextended left knee — will return during the series. More than that, Antetokounmpo’s injury compounded the discouragement of N.B.A. fans who keep hoping an injury wave among the league’s biggest stars will wane, and underscored questions about what it will mean for a team to emerge as champion from a weakened field.

A record nine All-Stars have already missed at least one game this postseason, with the number poised to rise yet again if Antetokounmpo can’t play in Thursday’s Game 5 in Milwaukee. The absences have sidelined the league’s most popular players when the N.B.A. had the biggest spotlight. They have also opened the door for an upstart Hawks team to make an unexpected championship run — despite not being widely considered a top-tier team before the season.

In a league where championships are often used to define a player’s legacy, being able to check that box is significant. But the slew of injuries that felled some of the postseason’s most high-profile competitors will inevitably raise questions about whether some people will give this year’s title the dreaded asterisk treatment — the symbol of a flawed championship. The former coach Phil Jackson once described the 1999 San Antonio Spurs championship, which came after a shortened regular season, as an “asterisk.” The Houston Rockets’ two 1990s championships — one while Michael Jordan was retired, and the other months after his return late in the regular season — are often thought of the same way.

“Playing this season through the pandemic has presented a host of challenges, and the physical and emotional toll on everyone involved has been enormous,” Tim Frank, an N.B.A. spokesman, said in a statement. “While injuries are unfortunate, especially this deep into the playoffs, they are a reality of our game every year. Just like last season, this season’s eventual winner will have overcome a tremendous amount of adversity and be proven a worthy champion.”

Other league figures are also already rebutting the chatter.

“No asterisks,” Stan Van Gundy, who was recently fired as the head coach of the New Orleans Pelicans, said in a Twitter post on Wednesday. “The challenges of the last two seasons may have been different from those of prior seasons, but the Lakers last year and whoever wins this year met those challenges better than everyone else. Champions with no asterisks.”

There has been a fierce debate for months about the culpability of a shortened off-season and a compressed schedule for the rate of injuries. Various team officials and players, most notably the Los Angeles Lakers’ LeBron James, have attributed this season’s injury wave to the rigors of back-to-back taxing seasons. The decision to play out the 2019-20 schedule in a restricted-access bubble environment at Walt Disney World in Florida because of the pandemic imposed many physical and mental-health challenges on players. Then, just 72 days after the Lakers won the championship over Miami, this season began.

League officials have countered by insisting that injury rates have remained consistent with recent seasons, without revealing the methodology or any specifics behind the data. As the losses of marquee players piles up, from Brooklyn to Los Angeles, the volume is rising on the question of what it means to win in a year like this, when so many stars are missing. Even Young, Antetokounmpo’s star counterpart in the Eastern Conference finals, is hurt: He was on the sideline for Game 4 because of a bone bruise in his right foot caused by accidental contact with a referee. It’s not clear when or if he will return.

“I mean, to me champion is a champion,” Enes Kanter, a 10-year N.B.A. veteran center who spent last season with the Portland Trail Blazers, said in a text message. “It doesn’t matter if it’s the N.B.A. bubble or the injuries or anything like that.”

The missing stars are fueling debates about the season that could have been. Last year, there was doubt there would even be a champion crowned because of the pandemic. This season, the stakes are different: Injuries derailed a potential juggernaut with all-time talent (Nets), a breakthrough for blossoming stars (Jayson Tatum and Jaylen Brown of the Boston Celtics; Jamal Murray of the Denver Nuggets) and a chance for redemption for the top-seeded Utah Jazz after last year’s first-round disappointment (Mike Conley). There was also James’s pursuit of a fifth championship ring, which would have tied him with Kobe Bryant and brought him closer to Michael Jordan’s six — more fodder for arguments about who is the greatest player in league history.

Over in the Western Conference finals, Kawhi Leonard, the best player for the Los Angeles Clippers, was scheduled to miss his eighth consecutive game on Wednesday night, with his team facing elimination against the Phoenix Suns, after spraining his right knee. The Clippers, down 3-2 in the series, are another team on the hunt for vindication after a playoff collapse last year. They may still get it, but the team faces long odds.

The injury bug for top players began in the regular season and carried over into the playoffs. The Jazz’s Donovan Mitchell missed the last 16 games of the regular season and Utah’s playoff opener against the Memphis Grizzlies because of a sprained right ankle, before coming back to help the Jazz win the series. The Celtics’s Brown missed the end of the regular season and the team’s first-round series against the Nets because of a torn ligament in his left wrist. One of the most significant injuries was to Murray, the Denver Nuggets’ starting shooting guard, who tore the anterior cruciate ligament of his left knee in April and was ruled out for the rest of the season.

Team training staffs have long struggled to conclusively attribute injuries to overuse, but the unrelenting wave of high-load players going down has increased pressure on the N.B.A. to offer more proof that this season’s condensed schedule, even with reduced travel, was not an injury accelerant. Nets guard James Harden, for example, began the season in Houston well shy of peak condition and then began playing heavy minutes for the Nets, which makes it more difficult to determine what caused the hamstring injury that made him one of the nine All-Stars to miss at least one game during the playoffs.

Young, Antetokounmpo and others like the Nets’ Kyrie Irving, who sprained his ankle, were injured through the sort of unfortunate landings that tend to be inevitable in basketball. Yet several of the injuries players have sustained were the kinds medical experts often attribute to overuse and insufficient recovery time, circumstances many teams feared from the moment the league and the players’ union agreed to squeeze a 72-game schedule between Dec. 22 and May 16 — timed to end right before the Olympics in Tokyo next month.

These have all caused ripple effects that will affect the league for years to come, especially depending on who wins the championship.

Chris Paul, the 36-year-old All-Star point guard for the Phoenix Suns on a quest for his first championship ring, missed the first two games of the Western Conference finals after reportedly testing positive for the coronavirus. It is perhaps an unfair burden, but a win in the finals would solidify Paul’s place as one of the best point guards in N.B.A. history. Without one — as players like Patrick Ewing, Charles Barkley, Steve Nash, John Stockton and Karl Malone have seen — many will always view his résumé as incomplete.

The decision to start the season so soon after the last ended, and to play it in the tight five-month window, didn’t rest solely with the league. It was made in conjunction with the players and their union. Both the league and its players stood to gain an estimated $500 million in television and other revenue by starting the season when it did instead of in mid-January with fewer games. But the year was a bumpy one, with dozens of games rescheduled as a result of Covid-19 related health protocols, leading to teams playing more games with tight turnarounds late in the season.

What’s clear: Injuries have affected these playoffs nonstop. Every season, and every postseason, has an injury component, but there’s a growing sense that the N.B.A.’s next champion will have been more lucky than good. The trophy may go to the healthiest team — as opposed to the best.