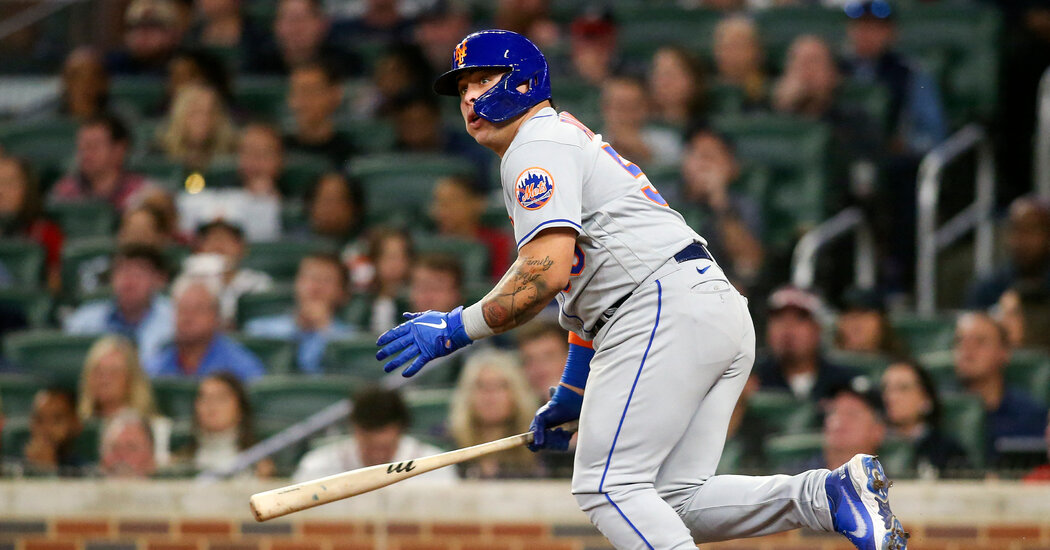 Ruf, a right-handed batter who was hitting .152 since the Mets acquired him from the San Francisco Giants in early August via trade, landed on the injured list on Friday with a neck strain, thus creating the opening for Álvarez.

Asked if six games were enough time for Álvarez to show if he can be a useful bat on a playoff roster, Mets Manager Buck Showalter said before the game, “No. Nobody is that good. We’ll take what’s there. This is about tonight’s nine innings, and we think he has potential to help us. We’ll see. We can’t ask them to extend the season.” He added later: “He’s in a good place swinging the bat and we hope to take advantage of that.”

Álvarez, on the other hand, displayed his usual confidence when asked the same question about whether he had enough time to show his readiness: “Clearly, obviously.”

Although the Mets haven’t received much offense from their catchers (the group led by James McCann and Tomás Nido has combined for a .559 O.P.S., 26th in M.L.B. entering Friday), they have guided the team’s pitching staff well. The Mets’ earned run average of 3.58 was eighth best in baseball. Thus Álvarez, who is less refined behind the plate, may not be given a heavy load there.

In 2018, the Mets signed Álvarez out of his native Venezuela at 16 as an international amateur free agent for a franchise-record $2.7 million. In three seasons in the minor leagues (the 2020 campaign was wiped out by the pandemic), Álvarez shot through the Mets system and proved that his hitting abilities were legitimate.

In 2021, he posted a .272 batting average with 24 home runs. And this season, in 112 games between Class AA Binghamton and Syracuse, he hit .260 with 27 home runs, an .885 O.P.S. and an appearance at the M.L.B. Futures Game, the annual All-Star type contest that features the best prospects in baseball. He returned from an ankle injury in September feeling better.

“We got into a circumstance here where we had a need, and he’s been checking the boxes on what we needed developmentally,” Mets General Manager Billy Eppler said before the game. “So, we gave him the opportunity.”