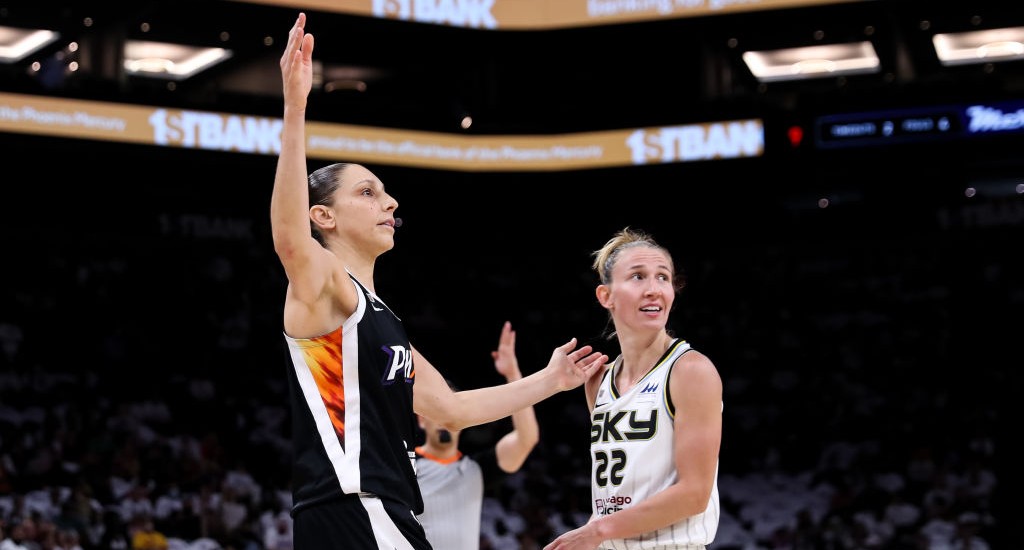 After the Sky dominated in Game 1 of the WNBA Finals, it was on the Mercury to respond and at least get a split at home in Phoenix in Game 2 before the series shifted to Chicago.

There were a few points during Game 2 in which it looked like the game might get away from the Mercury, as Chicago withstood Phoenix’s initial run to make a run of their own in the late first and early second quarter to take an 8-point lead. However, this time the Mercury had an answer, tying the game at 40 by halftime. The second half played out similarly, with the Sky leading by six going to the fourth, but again Phoenix, led by Brittney Griner with some big help from Shey Peddy and Skylar Diggins-Smith, had the answer, taking a four-point lead into the final 30 seconds of the game.

It was at that point that the game got wild, with Kahleah Copper crashing the offensive glass for an and-1 putback to cut the Mercury lead to one.

After Peddy split her free throws on the ensuing possession, Courtney Vandersloot went to work with a filthy crossover, drive, and finish over Griner to send the game to overtime.

In overtime, the sleeping giant that is Diana Taurasi awoke, opening the period with a four-point play to throw Phoenix out in front early.

The Mercury would go up six quickly in overtime, but the Sky reeled them back in to tie the game once again. Naturally, Taurasi again was the one to answer the bell with a big shot to keep Phoenix on top.

Diggins-Smith then put the game on ice with a tremendous drive and finish, evening the series at 1-1 and making clear that we are in for quite the series from here.

It was once again a really balanced night from the Sky, as Vandersloot was a monster with 20 points, 14 assists and five steals, orchestrating things offensively and taking the lead every time the Sky needed a big bucket. Allie Quigley added 19 points, albeit on 20 shots, Copper had 15 and Candace Parker put up 13 points and nine rebounds in another terrific two-way performance. However, the difference in Game 2 was how Phoenix stepped up offensively to match that output.

Griner was a beast down low, with 29 points and nine boards to lead the Mercury, while Diggins-Smith had 13 points, 12 assists, and seven rebounds. Peddy added 10 points off the bench for a big boost, but it was the GOAT who took them home with 20 points, eight of which came in the overtime period. As the series shifts to Chicago, there aren’t any real surprises left for either team to pull out and we saw how evenly matched they can be when both playing well in this one — and both squads will feel like they left a lot out there as each team missed a number of good looks at the rim and from three.