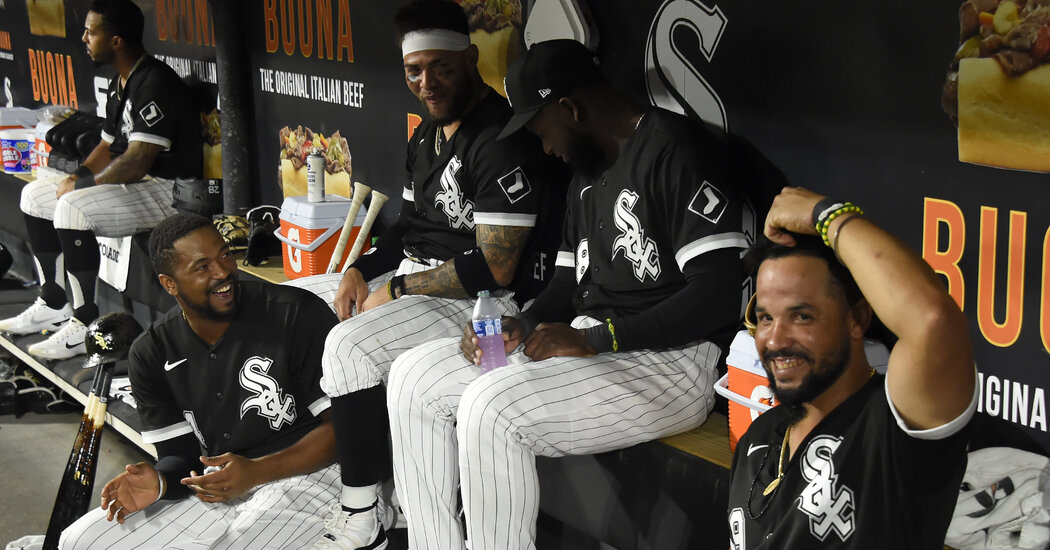 CHICAGO — Scan the Chicago White Sox lineup on any given day over the past two seasons, and it looks like Latin America. There are Cuban players at catcher, first base, third and center field. Since late July, a Venezuelan has been handling second base. A Dominican patrols left field, and other Dominicans have served as the designated hitter at various points.

Regularly, seven of the nine hitters in the White Sox lineup were born in that region of the world. And when Tim Anderson, the team’s All-Star shortstop, has been injured or resting, the number has reached eight, with Leury Garcia, another Dominican, filling his spot.

“That’s something you don’t see much of in the United States,” center fielder Luis Robert, a Cuban, said in Spanish recently.

In terms of numbers (28 percent) and talent (Fernando Tatis Jr., Vladimir Guerrero Jr. and Juan Soto), Latinos form a vibrant and important backbone to Major League Baseball. Perhaps no team knows that better than the White Sox, who have a rich tradition of Cuban players and play on the South Side of Chicago, a community with large Black and Latino populations.

The rise of the White Sox from the depths of the American League Central to winning the team’s first division title since 2008 and transforming into one of the most exciting teams in baseball has coincided with the blossoming of prominent Latinos on the roster. They include the veteran first baseman and team leader Jose Abreu, 34, the reigning winner of the A.L. Most Valuable Player Award; third baseman Yoan Moncada, 26; left fielder Eloy Jimenez, 24; and Robert, 24.

The White Sox signed the Cuban-born catcher Yasmani Grandal before the 2020 season, and they traded for second baseman Cesar Hernandez, a Venezuelan, at this year’s trade deadline. Their pitching staff also includes notable players of Latino descent, such as Carlos Rodon, a Cuban American All-Star who was born in Miami and raised in North Carolina; and pitchers Reynaldo Lopez, a Dominican, and Jose Ruiz, a Venezuelan.

When the Astros (95-67) host the White Sox (93-69) in a best-of-five American League division series starting Thursday in Houston, the Astros will field a lineup with Puerto Ricans, Cubans and a Venezuelan. The White Sox, though, will have more.

“There’s always more Americans than Latinos, but this is a team with a lot of Latinos, principally in the lineup, who play every day,” said Jimenez, who was born and raised in the Dominican Republic. “And there’s a sense of pride because you almost never see it.”

The White Sox, one of the original American League franchises, have long fostered Latino talent, specifically from Cuba. In the 1950s, the Cuban outfielder Minnie Minoso became a hugely popular All-Star. He was the major leagues’ first Black player out of Latin America and a treasured figure in White Sox history. A few cameos allowed his career with the team to stretch into five decades.

Minoso’s legacy has been carried on through the years, from Jose Contreras to Orlando Hernandez to Alexei Ramirez to Abreu to Moncada to Robert, many of whom endured harrowing defections to come to the United States to chase their dreams. On Aug. 1, 2020, the White Sox became the first team in major league history to have a Cuban-born player occupy the top four spots in a lineup: Robert, Moncada, Abreu and Grandal.

“You look at our roster, and it’s obviously undeniable about the Cuban presence, much less the Latin presence on it,” General Manager Rick Hahn said. “As cliché as it might seem, the environment that this team has had the last couple years is one where guys are just free to be themselves and express their personality.”

That has manifested itself in the clubhouse, away from the field, and before and during games, with dancing in the dugout and through various exchanges of traditions and cultures, from language to food to music.

Liam Hendriks, the team’s All-Star closer, who is from Australia and loved playing in the Dominican winter league one off-season, credited the team’s Latino players with bringing a jovial atmosphere and adding flair to their play.

“They make everything interesting at all times, and it’s a blast to come out here with these guys,” said Hendriks, 32. “We have a little something together, being guys from islands.”

Lucas Giolito, 27, a starting pitcher who is white and from Los Angeles, said he loved how much he had learned about the world from his teammates.

“I’m fortunate that I get to interact with not just a bunch of people who are like me everyday,” he said, “and be able to learn so much about culture and heritage, where a lot of these guys come from, all that kind of stuff. It’s great.”

In a sport where the number of Black Americans has dwindled to nearly 8 percent, Anderson, 28, said he felt a kinship with his Latino teammates, many of whom are Black Latinos, and called it “super cool” to fit in with them.

“They’re like the same as Black people,” said Anderson, who is from Alabama and, like some of his Latino teammates, plays with a glee on the field that has challenged baseball’s stodgy norms. “We’re talking about the same kind of culture. We get along well. The only thing is they just speak Spanish. Other than that, everything is kind of relatable.”

Anderson, the only Black American player on the White Sox for most of last year, said he could connect with the Latinos because they similarly came from “nothing.” He added: “You grind to get here. You’re thankful to be here, and you don’t take anything for granted.”

On opening day of last season, Anderson knelt during the national anthem to call attention to systemic racism. Kneeling alongside him on the field were several of his Latino teammates — Abreu, Robert, Jimenez and Edwin Encarnacion, then the team’s designated hitter — and a white teammate, Giolito. Two coaches, Daryl Boston and Joe McEwing, also joined the kneeling players.

Anderson said his teammates joined him because they understood some of his message and because they wanted to have his back at a tough moment, which, he added, said a lot about their similarities.

“We didn’t really do it to call attention or do it for bad reasons,” Jimenez said. “We just felt that we could do it and support him.”

In the clubhouse, Robert said, most of the Latinos have their lockers near one another, and they are always laughing and enjoying themselves. Moncada said the team generally alternated music — songs in English one day, songs in Spanish the next, sometimes including his own. (He dropped his first song in February.)

“It feels good because we all know where we came from,” Garcia said of his Latino teammates. “We’re from different countries but, at the same time, we’re united and with the same mentality. We feel the pride for each other. And what helps us be united is our pasts, the family you come from, very humble, and thank God, always with the support of teammates.”

Hendriks said he was often one of the first players to serve himself from the Latino section of the food room rather than whatever else was on the menu that day. Anderson said he had come to love empanadas. “Whatever they bring in, really, like chicken with rice, I’ll eat with them, that’s for sure,” he said.

Giolito said he devoured stewed chicken and stewed oxtail — traditional Dominican dishes — whenever they were around. “We always have Latin food options, like fried plantains, and you can never go wrong,” he said.

And with the Latinos leading the way on the field, the White Sox are hoping for a long run this postseason.