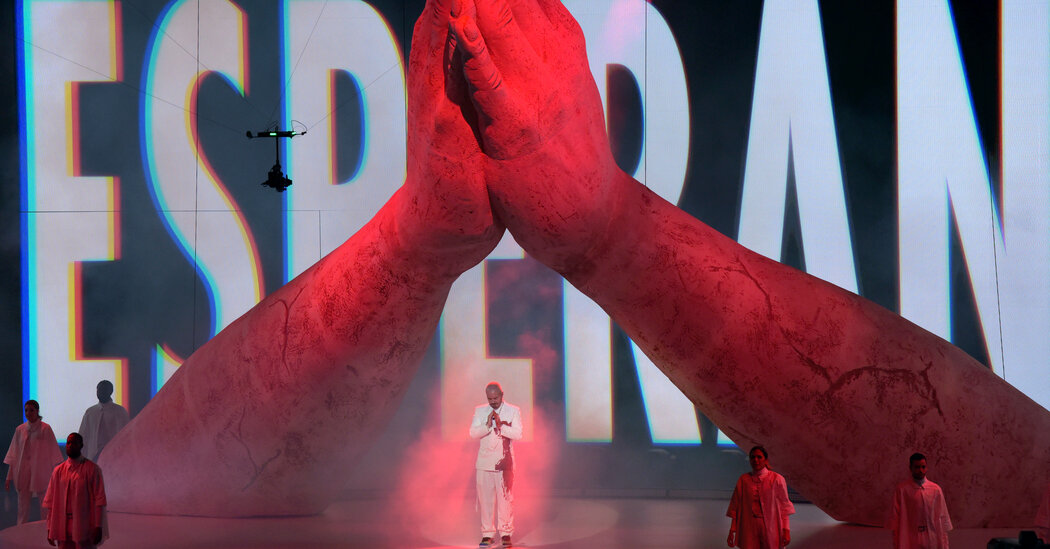 Yes, there were some remote and low-fi acceptance speeches, and the musical numbers from far-flung locations — Madrid, Buenos Aires, Guadalajara, Rio de Janeiro, Puerto Rico — weren’t necessarily live. There was no visible audience for the event, broadcast by Univision, but at the American Airlines Arena in Miami, where most of the show took place, enthusiastic onlookers supplied some applause. The Miami stage was large enough for social distancing among the musicians in the house band, though dancers and musical collaborators didn’t always practice it.

But unlike at the Country Music Association Awards, which were held last week in Nashville, there was no pretense that the pandemic didn’t exist. Early in the show, Raquel Sofía performed her song “Amor en Cuarantena” (“Love in Quarantine”), a nominee for best pop song. Later, Pitbull (with a dance troupe) rapped his coronavirus-era hard-rock motivational song, “I Believe That We Will Win (World Anthem),” backed by a band of firefighters, police officers and medical workers, making sure to list their names. Musicians who collected awards in Miami were glimpsed in masks before their speeches.

Karol G sang “Tusa,” about a woman on the rebound, in a simulation of its video with pink everywhere and a band of female musicians. J Balvin recast “Rojo,” from his album “Colores” (which won best urban music album), as a song about overcoming fear. He sang it under a giant pair of praying hands, in a white suit with a bleeding heart on his chest; a gospel choir joined him and the video backdrop showed words like “Justice,” “Change” and finally “Hope.” Bad Bunny’s segment, from Puerto Rico, was a music-video production; he belted the lascivious “Bichiyal” from a moving car.

The lineup encompassed stylistic and regional differences but also clear continuities. Unlike the forced, awkward collaborations of the Grammy Awards show, the Latin Grammys reveal how many musicians are genuinely steeped in the music of their elders. The show began with a tribute to Héctor Lavoe, the celebrated but troubled salsa singer who died in 1993. Victor Manuelle, Jesús Navarro, Ricardo Montaner, Ivy Queen and Rauw Alejandro shared Lavoe’s hit “El Cantante” (“The Singer”), about a performer’s private struggles; Alejandro sang about “new blood” and Manuelle gestured to the other singers as he added a line about how songs can cross generations.

Near the end of the show, the Puerto Rican urbano singer and rapper Anuel AA opened his segment with the brooding “Estrés Postraumático,” which quotes “El Cantante,” before praising a lover’s skills in “El Manual,” flanked by dancers and crowned with confetti. Sooner or later at the Latin Grammys, earnestness makes way for celebration.