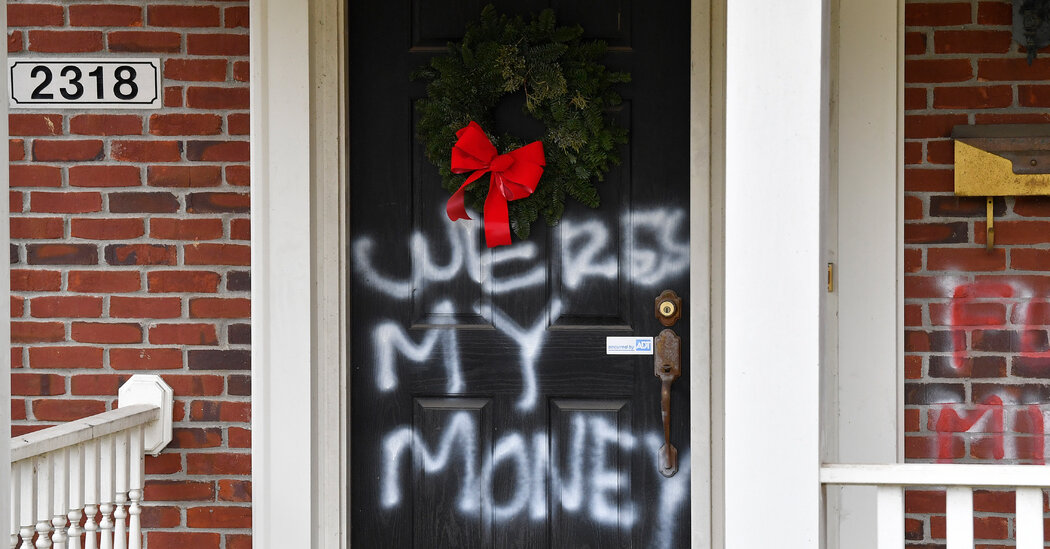 The homes of Mitch McConnell and Nancy Pelosi, political opponents and the two most powerful members of Congress, were reported to have been vandalized, as their standoff continues over a stimulus bill that has been criticized as inadequate by from both the left and right — including President Trump.

In a statement on Saturday, Mr. McConnell, a Kentucky Republican and the Senate majority leader, lamented what he called a “radical tantrum” drawn from a “toxic playbook.” The Louisville station WDRB-TV reported that the senator’s home was tagged overnight with red and white spray paint. Photos show writing on the front of Mr. McConnell’s home, including a message that says “Weres my money” on the front door. The Louisville Metro Police Department did not immediately respond to a request for comment on Saturday.

“I’ve spent my career fighting for the First Amendment and defending pe aceful protest,” Mr. McConnell said in the statement. “I appreciate every Kentuckian who has engaged in the democratic process whether they agree with me or not. This is different. Vandalism and the politics of fear have no place in our society.”

Around 2 a.m. Friday, San Francisco police officers responded to a report of vandalism at a home in the city’s Pacific Heights neighborhood. Graffiti had been spray-painted on the garage door and “a pig’s head” was left on the sidewalk in front of the house, a spokesman for the Police Department said. The San Francisco Chronicle reported that the home belonged to Ms. Pelosi, a Democrat who serves as House speaker.

President Trump signed a bill providing $900 billion in stimulus last Sunday, but called for payments to individuals be increased to $2,000 from $600. Ms. Pelosi rallied support for the shift, and the House voted to raise the payments on Monday. Mr. McConnell blocked the effort the following day .

Mr. McConnell said on Tuesday that the Senate would “begin a process” to consider bigger payments along with Mr. Trump’s other demands, which include investigations of his baseless claims of voter fraud in the 2020 election and the repeal of certain legal protections for tech giants such as Facebook, Google and Twitter.