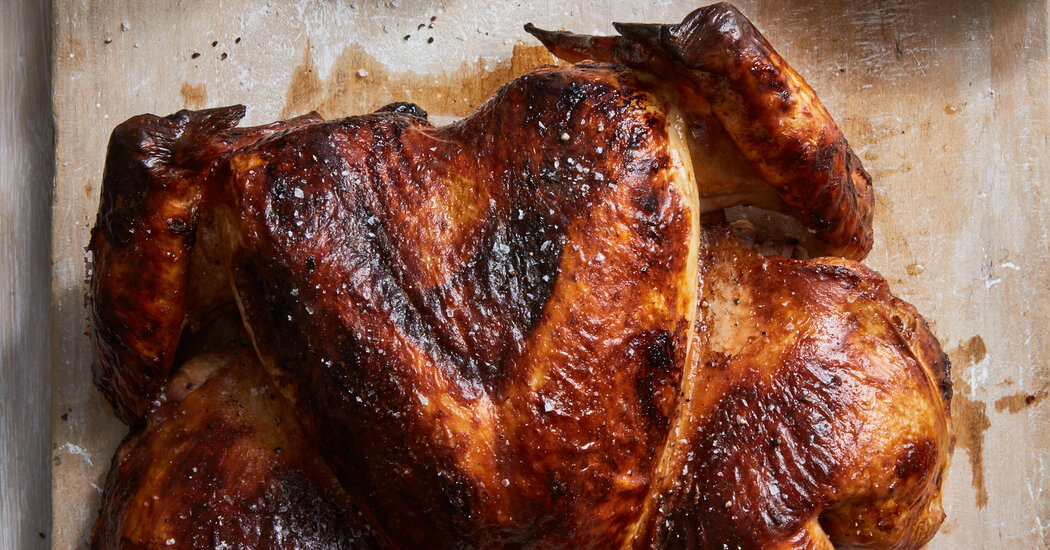 For someone who didn’t grow up celebrating Thanksgiving, I’ve got a lot of strong opinions about turkey.

It’s probably because I’ve cooked more of it than practically anyone I know, in just about more ways than I can list. I’ve roasted, braised, grilled, spit-roasted and deep-fried it. I’ve boned it out and made “turchetta.” I’ve dry-brined it, wet-brined it, injected it with brine and stuffed slabs of herbed butter under its skin. I’ve built a makeshift cinder-block oven to cook it at a friend’s farm that lacked a kitchen. I’ve even cooked 20 turkeys in a night, working the holiday in a restaurant.

And I once took an impromptu call from the famed rancher Bill Niman. He was just starting to raise heritage turkeys, and wondered if he could swing by with seven different breeds for me to cook for a blind tasting. I figured why not, and threw myself into the challenge, roasting all of the breasts and right legs, and braising all of the left legs. I remember that I took lots of notes and that some birds tasted much more turkey-ish than others.

As I look back on all of this poultry, though, one thing is clear: No matter how complicated or technical the preparation, no one turkey I’ve ever cooked has been that much more exciting to eat than any other. (Though if it was underseasoned or overcooked, it was certainly less exciting to eat.)

The truth is, deep down in my heart, I’ve always secretly hoped that if I cook it just right, a roast turkey will emerge from the oven as tender and juicy as a perfect roast chicken. And I suspect I’m not the only one who feels that way. But the fact of the matter is that it’s a different bird! And it has completely different qualities.

So let’s stop wishing our turkeys could be chickens, and let’s stop making ourselves unnecessarily miserable by complicating the cooking process. When it comes to turkey, simpler is better.

While I’ve finally, grudgingly, admitted that turkey isn’t chicken, it has occurred to me that I might be able to adapt my favorite roast chicken recipe for Thanksgiving. Three years ago, I published a recipe for three-ingredient, buttermilk-brined roast chicken

Advertisement
in my book, “Salt, Fat, Acid, Heat.” It’s now among the most beloved of my recipes, and every November, people reach out to ask if they can apply the technique to their holiday turkey.

I’ve always answered hesitantly — not having tested it, I wasn’t sure that the skin wouldn’t grow too dark with the longer cooking time, or that the seasoning would be balanced. This year, I figured it was time to try it out for myself.

I set about tinkering, and the first thing I changed was timing. The chicken takes a simple overnight dip in the buttermilk, but a turkey weighs three times as much as a chicken, so it needs to spend a full 48 hours in the brine to ensure the meat is tender and properly seasoned throughout.

Next, the salt. Unlike the original chicken recipe, which leaves things to chance, I decided to specify the turkey brine’s ideal salinity — no one wants a bland holiday bird. But I’m a pragmatist, and I know that we’re not all using the same type of salt. I also know that different salts have different levels of salinity by volume, but not by weight. So, if you’ve got one, I encourage you to use a scale to measure out your salt to ensure a balanced brine. It’s just about the trickiest part of the recipe, and I promise you won’t regret it.

The last and most obvious change was my decision to spatchcock the turkey. By removing its backbone and flattening it out, I cut the cooking time by more than half. While in the chicken recipe, the lactose in the buttermilk contributes to perfectly golden-brown skin, I’d worried that a turkey’s significantly longer cooking time might yield a blackened bird.

Spatchcocking put an end to that fear. Furthermore, laying the bird out flat means there’s greater surface area for browning — more of that dark, lacquered skin for everyone.

An unexpected boon of spatchcocking is how beautifully it streamlines the entire brining process: Without a backbone, the turkey can just be folded in half and slipped into a two-gallon zipper-top plastic bag containing the buttermilk and salt. There’s no unwieldy pot or bowl taking up all of your refrigerator space. Just slip the bag in wherever it fits, turn it two or three times a day, and that’s it. Simplicity is everything here.

This year will require something different of many of us, whether that means gathering in smaller groups, eating alone on a Zoom call or forgoing some of our usual Thanksgiving comforts. So I’m offering three versions of this recipe, for whatever your holiday entails: the spatchcocked whole turkey; a brined breast, for those who want turkey for four to six people; and the classic buttermilk chicken, for those who may not want or be able to manage a turkey.