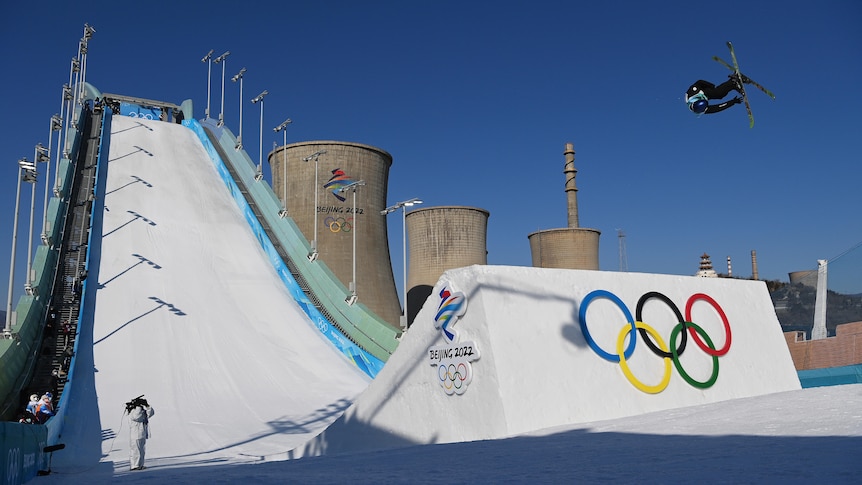 A key selling point at the Beijing Winter Olympics is the organisers’ claim to be the “green” Games.

“The Sustainability and Legacy Games” is a phrase that appears regularly, as well as being written on all official communications and documents.

The sustainability aspect comes from the organiser’s commendable aim to be 100 per cent carbon neutral, using carbon dioxide refrigeration techniques, low-carbon transport options and the use of existing venues from the last Games.

Beijing’s Summer Games unveiled some of the most spectacular venues in Olympic history.

The Birds Nest, the Ice Cube — both bear witness to history taking place in 2008 and have been used in 2022 as well.

But green doesn’t always mean planting trees and carbon storage. Sustainability comes in many forms, including the regeneration of inner-city brownfield sites.

One of the most spectacular venues at this Games is a case study in urban regeneration.

Shougang, in Beijing’s west, used to be an industrial wasteland, host of the former Shougang Steel Mill, a storage and production centre for iron ore that pumped noxious fumes into the atmosphere for decades.

Now, the only things launched skyward are the world’s best big-air skiers and snowboarders, flipping and twisting their way acrobatically towards Olympic glory.

And those athletes are big fans of the world’s first-ever permanent big-air structure.

China’s Eileen Gu heaped praise on the venue after qualifying for the final.

“The venue is fantastic. Look around, there is no snow anywhere else yet somehow when you’re skiing on this jump you feel like you’re on a glacier somewhere,” she said.

“It is amazing what everybody was able to do here.

“Aesthetically, scientifically, technically to be able to pull this off in such a professional manner speaks volumes to the commitment China has put into winter sports.”

The total regeneration of the former brownfield site will remain after the Olympic circus moves on to be the national training centre for Chinese athletes, as well as a community hub.

That’s another big plus for the competitors.

American Mac Forehand said he hoped it was a sign of things to come.

“It’s one of the best big-air jumps we have,” he said.

“We have had city big-airs in the past and they’ve been all scaffolding, so they’ve been a bit smaller. A smaller in-run, a bit narrower, smaller landing and shorter.

“It’s cool we get to see a jump like we’d see in the mountain, in the city.”

It’s not just the big-air that’s found a home at the venue.

The main offices and administration areas for the Games are hosted in the north of Shougang Park, with the Big-Air Shougang slope situated in the south, next to four imposing industrial cooling towers that were originally set to play a major part in the drama of the big-air competition.

The towers are a reminder of the industrial heritage of the site, which has potential to become as iconic as other sporting industrial relics, such as the Oval’s gasometer in the UK.

According to the official Games booklet, Thomas Bach said the move into the old industrial site set a great example of building landmarks on industrial legacy areas.

Chief architect of the venue, Zhang Li, said athletes were originally going to emerge from one of the cooling towers to add to the theatre of proceedings.

“We tried to get the lift inside one of the cooling towers so you would see the athletes walk out of nowhere at the start of their jumps,” Professor Zhang told the Olympic News Service.

“But these cooling towers are very fragile structures and if you make a hole in the skin, then probably they will collapse.”

Professor Zhang — who also designed another new permanent structure for these Games, the National Ski jump centre — takes the legacy aspect of this venue seriously.

“When I was very young we used to go there from primary school to study about industry,” Professor Zhang said.

“Being able to work on the transformation of that part of the collective memory of Beijing is really, really exciting. I can’t think of a more exciting project.

“The Games is a big test, but there follows a bigger one: whether this venue will be truly embedded in the local urban life.

“You expect it to be completely opened to the public and to see what kind of things can happen here other than just sightseeing.”

Switzerland’s Mathilde Gremaud finished third with a score of 182.50.

Aussies Matthew Cox and slopestyle bronze medallist Tess Coady will be in action at the venue in the snowboard big-air on Monday, January 14.