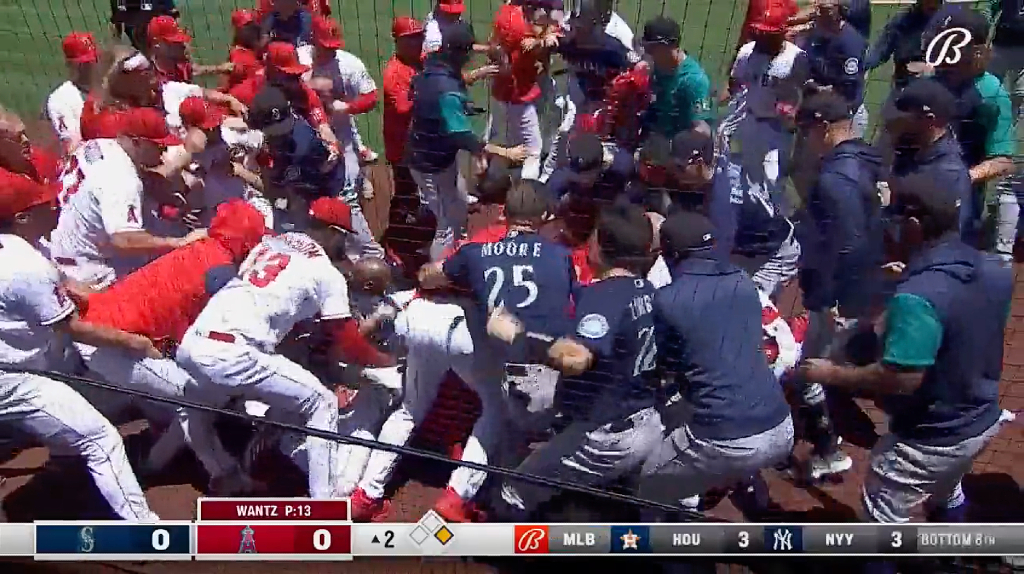 The Angels and Mariners wouldn’t be on the shortlist of the most heated rivalries in baseball for most people, but on Sunday afternoon the divisional foes got into quite the brawl after the Angels drilled Jesse Winker with a fastball to the hip in a 0-0 game in the top of the second inning.

It was a slow burn, as initially there was just a little jawing and the Mariners calling for pitcher Andrew Wantz to get tossed, but eventually Winker’s attention turned to the Angels bench, shedding the umpire’s best efforts to hold him back, and sparking a three-minute long fight that saw punches, tackles, and a few separate instances of things seeming to have calmed down only to have another fight spark it once again.

MLB is going to have its work cut out trying to figure out who earned a suspension in all of this, as there is just a sea of bodies grabbing at each other, some trying to pull guys away and others trying to instigate. There’s some punches thrown and some definite instigators that will see themselves get fines and suspensions, but it’s as good of a basebrawl as we’ve seen in some time and that’ll certainly spark some interest in the next series between these AL West teams.

UPDATE: Angels pitcher Raisel Iglesias was still very mad after the two teams had returned to their dugouts and proceeded to meltdown in the Angels dugout, launching sunflower seeds (multiple times) onto the field.