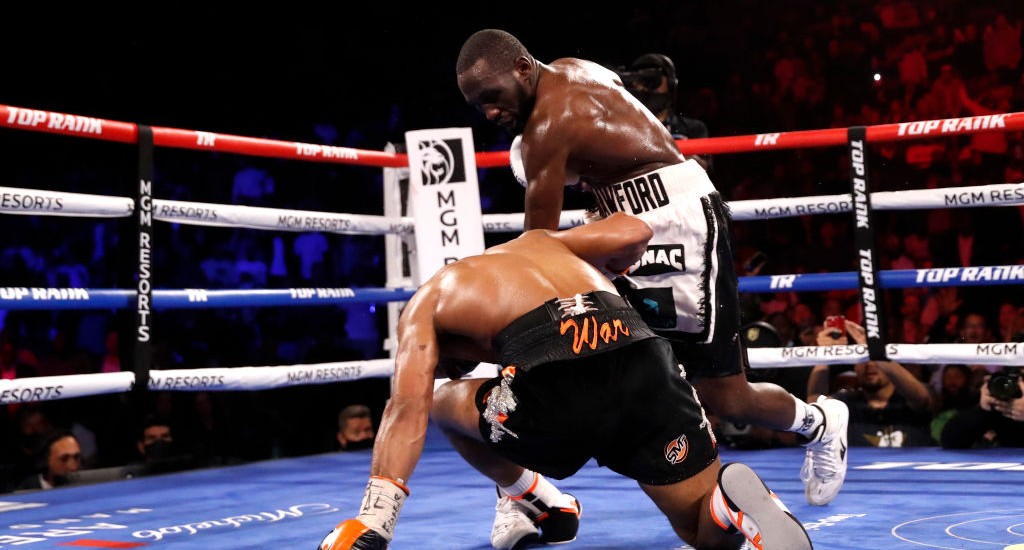 Terence Crawford has long been one of boxing’s most talented stars, but many wanted to see the man who briefly sat atop the pound-for-pound rankings step in the ring with some of the current best in the welterweight division. On Saturday night, he gave them the show they wanted when he squared off with Shawn Porter and the two delivered a thrilling 10-round battle that saw Crawford once again deliver some theatrics in the later rounds.

Early on the two were trading shots and through the midway point of the fight, there were a number of ringside observers who had the fight even or had Porter ahead on the cards.

Crawford was able to open up a cut over Porter’s right eye early, but Porter kept moving forward and tagged Crawford with plenty of shots of his own. The two traded shots throughout the fight, providing plenty of action for the capacity crowd at Mandalay Bay.

However, as happens so often in Crawford fights, once he drew Porter out to the deep waters of the late rounds, his power remained while Porter’s shots no longer carried the same weight and, slowly but surely, he began to take control. After a strong ninth round, Crawford unloaded on Porter in the 10th with a pair of knockdowns that cemented the fight as his.

After Porter was knocked down twice with 81 seconds still left in the 10th round, Porter’s father stepped in and threw the towel in from the corner, giving Crawford the TKO victory as he became the first person to ever stop Porter.

The win moves Crawford to 38-0 with 29 knockouts, including nine consecutive fights where he’s stopped his opponent before the final bell. The immediate hope for many is to see Crawford tangle with Errol Spence Jr., who was in Vegas for the fight but left almost immediately after Crawford’s scintillating knockout win. For Porter, it’s his second loss in three fights, having lost a split decision to Spence in 2019, and, as mentioned, the first time he hasn’t made it the distance. There will be plenty of chatter about what’s next for Crawford, particularly as he appears set to move on from Top Rank, but in the immediate, we were given a chance to marvel at one of boxing’s very best at any weight class put on another sensational show.