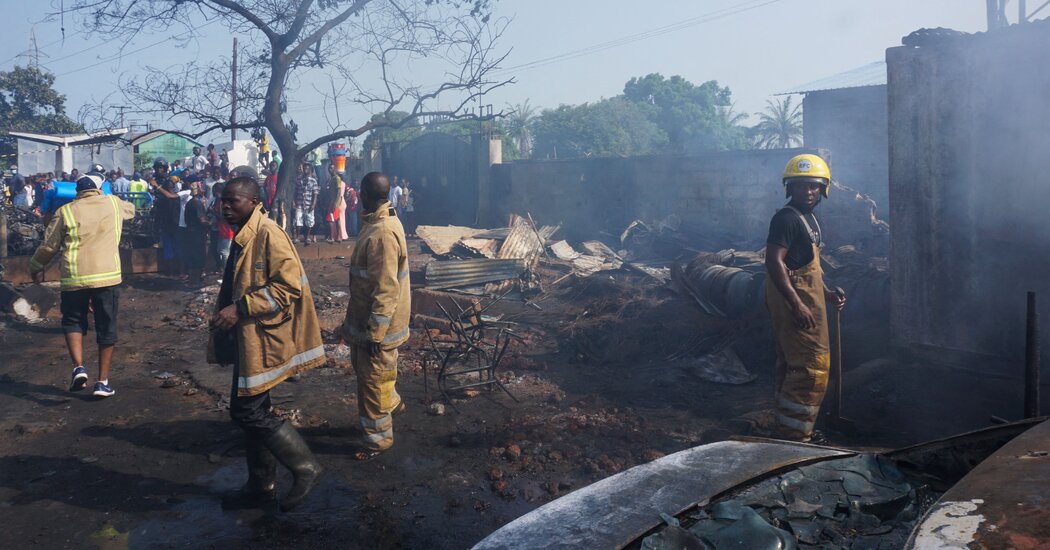 At least 98 people were killed when a tanker truck exploded on Friday night after a crash in the capital of Sierra Leone.

Many of the victims were motorcycle riders and taxi drivers who had been trying to collect leaked fuel at the time of the blast, in the Wellington area of the capital, Freetown, according to an official from the country’s disaster management agency. A witness to the explosion’s aftermath said it had also killed people nearby outside buildings and in vehicles.

The death toll may rise, the official, Mohamed Lamrana Bah, said, because more people were taken to hospitals in critical condition, though he could not specify a number.

The West African country’s president, Julius Maada Bio, said on Twitter that he was “deeply disturbed” by what had happened and promised government support for the families affected.

He and the mayor of Freetown, Yvonne Aki-Sawyerr, cut short their trip to Glasgow for the COP26 climate summit and were on their way home on Saturday afternoon.

Sierra Leone’s vice president, Mohamed Juldeh Jalloh, asked those who had taken fuel to return it, in case it exploded in their homes.

The tanker truck is thought to have been attempting a U-turn about 10 p.m. when it collided with a truck carrying sand, Mr. Bah said. The tanker truck then began leaking fuel.

“Bike riders, taxi drivers and people around the neighborhood rushed to the scene to collect the leaking fuel, and in the process, the tanker exploded,” he said in an interview on Saturday morning.

Mr. Bah, who is the communications director of Sierra Leone’s National Disaster Management Agency, said that one house and the tires of the sand truck were still burning, and that his agency and others were trying to clear the area.

In one video of the aftermath, a man walked gingerly away from the site of the explosion, a few rags — all that was left of his clothes — hanging from his badly burned skin. He appeared to have been among those who tried to collect fuel.

“Satan called me. Let us pray. There is no other god but Allah. Let us pray,” he repeated to himself as he walked.

The explosion also set fire to a nearby gas station, Mr. Bah said.

​A student who lives nearby said he had heard the blast and felt its felt its heat in his home, and then rushed to the scene.

“​We removed our shirts and wrapped our hands to lift bodies from the burning scene and took them to a safe place​,” said the student, Abdul Waheed Kamara, 26. ​ “I personally rescued 16 people, the last of them was a woman. Me and another man helped her to a safe area. She was still alive but badly burnt.​”

He said he had counted more than 100 bodies, and that the fire service had arrived about 30 minutes after the explosion. There were no soldiers there, and police officers were standing well back from the fire, he said.

​Among the dead, according to Mr. Kamara: a child wearing a backpack, people who were asleep in a nearby garage and parking lot, shopkeepers who tried to salvage their goods and got caught in the fire, and all the passengers of a minibus that was hit by the force of the explosion.

“​​I can still see the scene of the woman I rescued, and I can’t get the images off my head​,” he said​. “​I won’t be able to see that place the same again.”