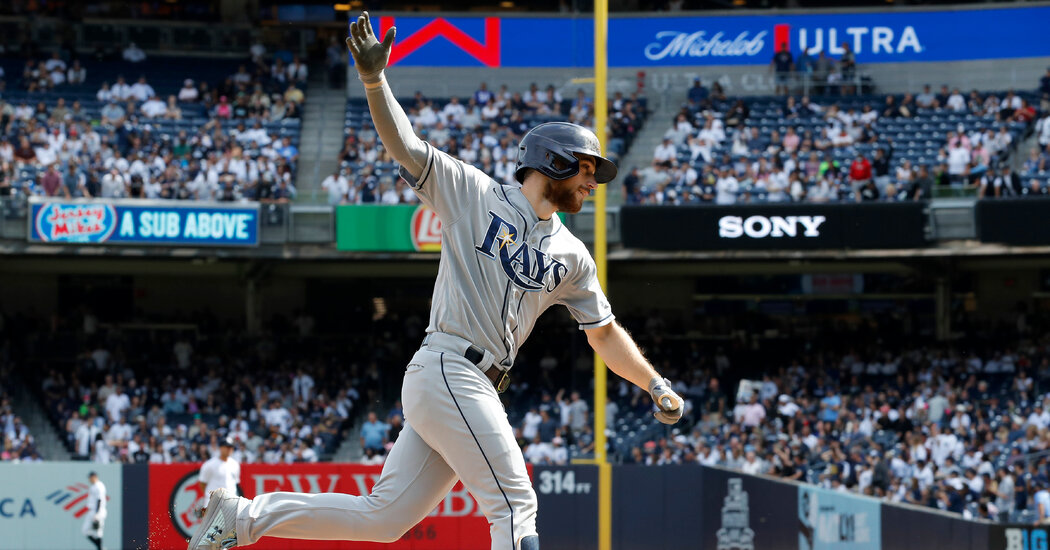 ST. PETERSBURG, Fla. — Chad Mottola was sure he was done with baseball. He had given 16 years to the game, all to get 25 hits in the majors and a thousand restless nights in the minors. Nagging questions would swirl through his brain at odd hours: How could he change his swing? Would he ever get another call to the majors? Should he quit?

When he finally retired, at 36 years old in 2007, Mottola considered a career in football scouting. But a friend thought he’d make a good baseball coach, and the job he was offered — at the lowest level of the minors — was convenient for his young family. Mottola took it, loved it, and now guides the surprisingly robust offense of the Tampa Bay Rays, the best team in the American League.

“The kids were just so innocent, and it brought back my innocence,” Mottola said recently in the home dugout at Tropicana Field, not far from that first coaching job, with a Toronto farm team in Dunedin, Fla. “I thought, ‘You know what, I think I have something to offer these guys.’ I enjoy seeing people have success, or even just sleeping well at night, and I would talk about that a lot. That’s my whole goal daily: How am I going to, when you lay your head down, get you to rest?”

These days, it seems, the Rays are the ones keeping rivals up at night. They have gleefully upended conventional wisdom since their first winning season, in 2008, but now they do it better than ever: They set a franchise record for victories this season, with 100, propelled by the best offense in team history, with a major-league-high 857 runs scored.

The Rays are coasting into the playoffs, as their rivals fight for wild-card spots, and they have scored all those runs while also leading the A.L. in strikeouts, challenging the traditionalist’s notion that teams must — or at least should — strive for contact.

They reduced their whiff rate down the stretch, helped by the rookie shortstop Wander Franco, who had more hits than swings-and-misses in a recent streak of 43 games reaching base. But the Rays, who will host the winner of the wild-card game on Thursday to start their division series, are not a team of slap hitters.

“Nobody’s afraid of the guy who’s going to break his swing down and make contact and hit a ground ball to short or second — that’s an out,” said second baseman Brandon Lowe, who leads the team in homers (39, including three on Saturday) but also has 166 strikeouts. “So if a guy’s going to do that on 0-0 or 0-1 count, with our defense and the team that we have, it’s like: ‘Thank you, I appreciate you selling your bat out that way.’

“There’s something to be said about getting your swing off until two strikes — and if you really look at it, how many guys practice a two-strike approach? How many times do you go out in batting practice and say, ‘OK, I’m going to take this like I’m hitting with two strikes.’ Not a lot of guys do that. It’s hard to go up there in a game and just completely change your swing. So, obviously, nobody wants to strike out. But I think there’s a more positive outlook to getting your swing off and being able to do damage than breaking your swing down just to make contact.”

The Rays can live with strikeouts because they understand there are no perfect players — at least none in their price range. According to Baseball Prospectus, they spent just $83 million on their 40-man roster this season (26th in the majors) without a single player making $12 million. To make up for a lack of well-rounded stars, the Rays seek players with specific skills and deploy them in just the right spots.

They accept flaws, emphasize strengths and now have a five-year streak of improving their overall ranking in runs scored: from 25th in 2017 to first now.

“There’s trade-offs to all of it,” said Erik Neander, the Rays’ president of baseball operations. “It’s not necessarily like, ‘Oh, strikeouts, whatever.’ But it’s just trying to make the most of what we have and what’s best for our players. The guys in the batter’s box, they’re also the ones that run the bases, they’re also the ones that play defense, and some of the guys that do strike out are exceptional in those other areas. That matters, too.”

While the Rays are missing their top three starters from last year’s World Series — they traded Blake Snell to San Diego, let Charlie Morton leave for Atlanta as a free agent and lost Tyler Glasnow to Tommy John surgery — their offense stayed largely intact. Add Franco and Nelson Cruz, subtract Willy Adames and Hunter Renfroe, and it is virtually the same group that hit .207 across the last three rounds of the postseason.

In theory, the Rays’ penchant for strikeouts makes them vulnerable to the power arms most teams use in October. (“That’s fair to always have in the back of your mind,” Manager Kevin Cash acknowledged. “When you’re facing the big-time strikeout pitchers or staffs, how do we match up?”)

But the Rays led the majors in strikeouts last season and still came within two victories of their first title, helped greatly by a sudden slugging outburst from outfielder Randy Arozarena. Cash is a master of leveraging matchups; he has used a major-league-high 157 different lineups this season and substitutes often. The team excels in situational hitting, batting .357 with runners on third and less than two outs through Friday (the M.L.B. average: .316) and scoring by far the most runs in the majors in the ninth inning.

Mottola said he never pays attention to team totals, because every hitter has different strengths and weaknesses. His itinerant pro career — which began as the fifth overall draft choice by Cincinnati in 1992, one spot ahead of Derek Jeter — taught him there are no absolutes to his craft.

“No one’s figured out hitting,” Mottola said. “I know a lot of people have claimed on the internet that they have all these answers and everything. But my experience as a player made me realize there’s no one answer, and there’s no one way to think. I played with a lot of good players, and not one of them taught me the same thing.”

The proliferation of personal swing coaches worries Mottola; developing hitters, he fears, will be raised as robots, drilled on faddy techniques that might not be best for them. Then again, he said, it is part of his responsibility to study any theory that might intrigue his hitters.

“You always hear about the cookie cutter approach, and he’s about as anti-cookie cutter as it gets,” Lowe said. “When I first got up here in 2018, he kind of sat me down and said, ‘I want you to tell me everything about your swing, how you want to hit, your approach, your drill work, everything, so I can help you better understand your swing and what you need to do to optimize it.’ He wants to learn about you before he tells you anything to do.”

That is a helpful hint to understanding an organization often portrayed as rigidly tied to analytics. As much as the Rays look to data for answers, they could not translate the lessons without the kind of personal connection Mottola seeks.

Coaches build trust by listening to players, so when Cash writes an unusual lineup or Neander makes a puzzling trade, the players do not panic. Usually, they just shrug and keep winning.

“It’s a team-first approach here — that’s the kind of atmosphere that’s been set for us, and it starts from the top down,” third baseman Joey Wendle said. “We’ve seen success doing this, and if we’re having success, then why would we want to change that?”