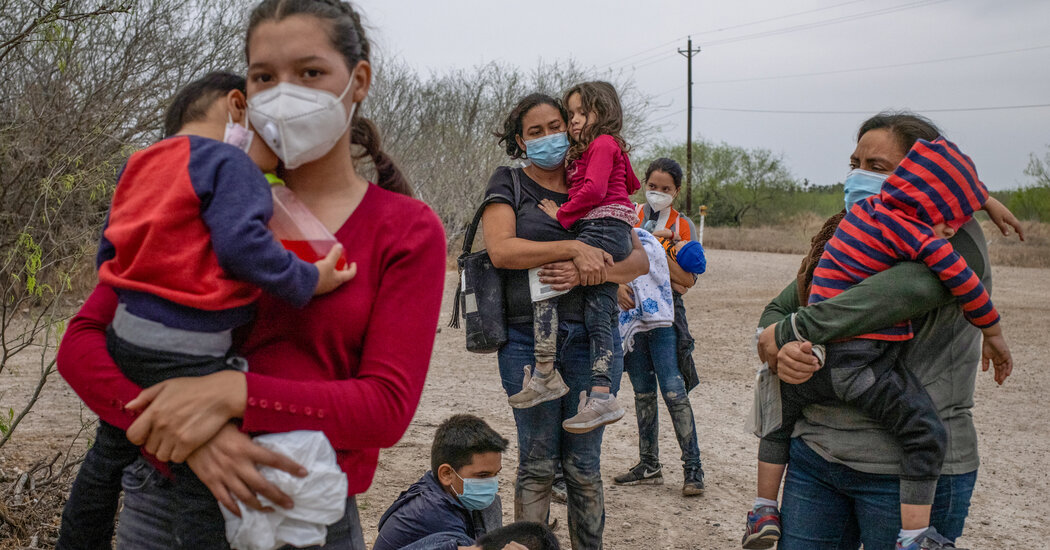 WASHINGTON — The Biden administration warned on Tuesday that the United States expected to make more apprehensions along the southwestern border this year than at any time in the past two decades, underscoring the urgency for the White House to develop solutions for the chronic problems with immigration from Central America.

The grim prediction by Alejandro N. Mayorkas, the secretary of homeland security, came as President Biden was being assailed for his handling of a surge at the border involving thousands of unaccompanied children and teenagers from the region — with attacks coming from the right for not being tough enough and from the left for not being humane enough.

The president has pleaded for time and patience, blaming his predecessor for dismantling the immigration system in his zeal to keep foreigners out. But even Mr. Biden’s top advisers acknowledge that after unwinding President Donald J. Trump’s harsh policies, there is no easy or quick fix for a problem that has been a recurring crisis.

“We have no illusions about how hard it is, and we know it will take time,” Mr. Mayorkas said in a statement on Tuesday as the House prepared to vote this week on several immigration measures and the administration rushed to provide more housing for the young migrants arriving at the border. But, he added, “We will get it done.”

The approach being developed by the administration involves steps that it can take relatively quickly and others that will take longer and require agreement from Congress or cooperation from the governments of Central American nations. And it will have to deal with several categories of people, including the unaccompanied minors who are overwhelming the system now and eventually asylum-seeking families and those trying to slip past border agents.

In the short term — as warmer weather invites even more people to migrate north — Mr. Biden’s administration must find a way to temporarily care for the thousands of migrant children who are arriving at the United States border without a legal guardian.

That includes expanding facilities where the children can be held legally for up to 72 hours in the custody of the Border Patrol. And it means finding more residential places where the migrant children can live for weeks or even months while the government searches for a relative or friend to take care of them while officials decide whether they must return to their home countries.

The Biden administration is struggling to quickly ramp up capacity. But the longer-term challenges are even more daunting.

Mr. Biden’s advisers have said they want to establish systems in Mexico that would provide a way for migrants to file applications to seek refuge to the United States in an orderly, safe manner, without coming to the border. But doing so will take months, and it is not yet clear whether migrants will use them.

For those who do apply for asylum, Mr. Biden’s team has said it will shorten the review process, which currently can take years to reach a final decision. Mr. Mayorkas has said asylum cases should be decided in weeks, one way or the other. But making that happen will require investing money and hiring people to process huge backlogs of cases.

Finally, Mr. Biden has vowed to vastly increase support for places like Honduras, El Salvador and Guatemala so that Central Americans no longer feel the need to flee their homes. But even with the $4 billion that the president has proposed, rebuilding societies wracked by violence, gangs and stagnating economies will take years or decades — if it works at all.

All of the solutions Mr. Biden is considering have been under discussion for decades, often included in comprehensive immigration legislation that has repeatedly failed to get through Congress, falling victim to deep partisan divisions.

For now, Mr. Biden has left in place a Trump-era pandemic emergency rule that empowers agents to rapidly turn away most migrants other than unaccompanied minors without providing them the chance to have their asylum claims heard.

Mr. Mayorkas’s prediction about the scale of apprehensions this year includes migrants who will be detained in border facilities, as well as those rapidly turned away under the pandemic rule. It does not include those who managed to avoid border agents when crossing into the country.

“The administration, they’re asking for patience, but that only goes for so long when you’re looking at these kind of numbers. And what happens after patience?” said R. Gil Kerlikowske, a commissioner of Customs and Border Protection under President Barack Obama. “What is the plan for dealing with this? What is the plan going forward?”

During the current fiscal year, which started Oct. 1, Customs and Border Protection has recorded more than 396,000 migrant crossings, including at official ports of entry, compared with about 201,600 during the same period last fiscal year.

A majority of those crossings involved single adults, who under current rules are often quickly expelled back to Mexico or their home countries. But unaccompanied children are taken by a border agent first to a detention facility, where they are then supposed to be transferred within 72 hours to a shelter managed by the Department of Health and Human Services.

Those shelters were operating until recently with restricted capacity because of the coronavirus pandemic, leaving thousands of minors stuck in the jails along the border, including some who have been left to sleep on mats with foil sheets, according to lawyers who visited a facility in Texas.

But even before the pandemic, the shelter system had often been pushed beyond capacity.

The Biden administration this month directed the shelters to return to their normal capacity, allowing the government to increase the number of available beds in those shelters by about 40 percent.

With the number of minors at the border climbing, the administration is now scrambling to find additional space, including at a convention center in downtown Dallas; at a former camp for oil field workers in Midland, Texas; at a NASA site in California; and at a tent encampment in Arizona.

Mr. Biden said during an interview with ABC News on Tuesday that the administration could have enough shelter space by next month for the unaccompanied minors stuck in border facilities.

The government is also trying to reduce the amount of time it takes to transfer a child from border facilities to the shelters by streamlining a system that sends them through three different bureaucracies: the Border Patrol, the Immigration and Customs Enforcement agency and the Department of Health and Human Services. Coordination between the three agencies has often broken down and resulted in delays.

The Biden administration has started placing officials from the Department of Health and Human Services in border facilities to accelerate the process of finding a relative or other sponsor in the United States who can take the migrants in.

While the administration continues to invoke the emergency pandemic rule to turn away most adults and migrant families, senior homeland security officials have acknowledged that they will be able to use the emergency rule only for so long as vaccination becomes more widely available.

In the meantime, the president and his top border officials have issued statements about the perilous journey to the United States, hoping to discourage migration to the border.

The administration held a series of private calls with pro-immigrant groups and advocates last week to discuss Mr. Biden’s immigration agenda. David Shahoulian, a top immigration official at the Department of Homeland Security, said that the messaging to discourage migrants from coming had not been working and that the administration would need to be clearer in the future, especially given that smugglers continue to encourage migrants to travel to the United States, according to people familiar with the discussion.

Mr. Mayorkas had said this month that the administration’s message was not “don’t come” but rather “don’t come now.” Roberta S. Jacobson, a special assistant overseeing border issues, initially said mistakenly in Spanish during a news briefing that the border was not closed, but then corrected herself to say it was closed.

By Tuesday, the president had an even more direct message: “I can say quite clearly, ‘Don’t come over,’” Mr. Biden said on ABC News, adding that the administration was working on creating opportunities for migrants to apply closer to their homes for asylum. “Don’t leave your town or city or community.”

The Biden administration is working with Central American countries to reduce pressure on the border, Mr. Shahoulian said on one call. And it is examining options for expediting the processing of asylum cases.

“We will shorten from years to months the time it takes to adjudicate an asylum claim,” Mr. Mayorkas said in his statement on Tuesday, adding that the administration would soon introduce a regulation to improve the system. He said that the administration was working to establish processing centers in Central America so that they could be screened and “brought to the United States if they qualify for relief under our humanitarian laws and other authorities.”

Mr. Biden said in his campaign platform that he would increase the number of judges and immigration officers to combat a backlog that nearly doubled during the Trump administration to more than 1.2 million cases.

It will take time to ramp up the program, which has strict vetting requirements, in order to verify the relationships of the children and their relatives.

Now, the administration is eager to examine even broader efforts to consider asylum applications remotely.

It is already testing a system where migrants, who were told by the Trump administration to wait along the border in squalid camps in Mexico, can use an app on their cellphones to apply for asylum and track their cases. That kind of system might be expanded more broadly, officials said.

“This is the road map going forward for a system that is safe, orderly and fair,” Mr. Mayorkas said.

Many of the changes Mr. Biden wants are included in comprehensive immigration legislation he sent to Congress on his first day in office. But that bill is a long way from becoming law, especially with Mr. Trump and other Republicans again using immigration to stoke their partisan base.

Mr. Biden’s most ambitious — and difficult — goal is to use the United States’ wealth and diplomatic power to reshape the region in the hopes of diminishing the root causes of migration from Central America, starting with poverty and violence.

It is an effort that has been tried before. Mr. Obama and members of Congress from both parties agreed to invest several hundred million dollars into Central America with the hope of improving the courts, diminishing the cartels and improving economic conditions.

Mr. Trump cut that spending, arguing that it was a waste of money, before restoring some of it. But Mr. Biden’s team is betting that even more investment will produce results. In Honduras, for example, the country’s coffee production has been hurt by hurricanes and slumping prices for coffee beans, driving many people into poverty.

But helping to reverse those kinds of economic trends could take years.

“When the president talks about ‘root causes,’ some of this is immediate humanitarian aid, but a lot of it is policy and aid together, making sure that you tackle the root causes of migration,” Ms. Jacobson said. “Otherwise, what you see is continued cycles.”