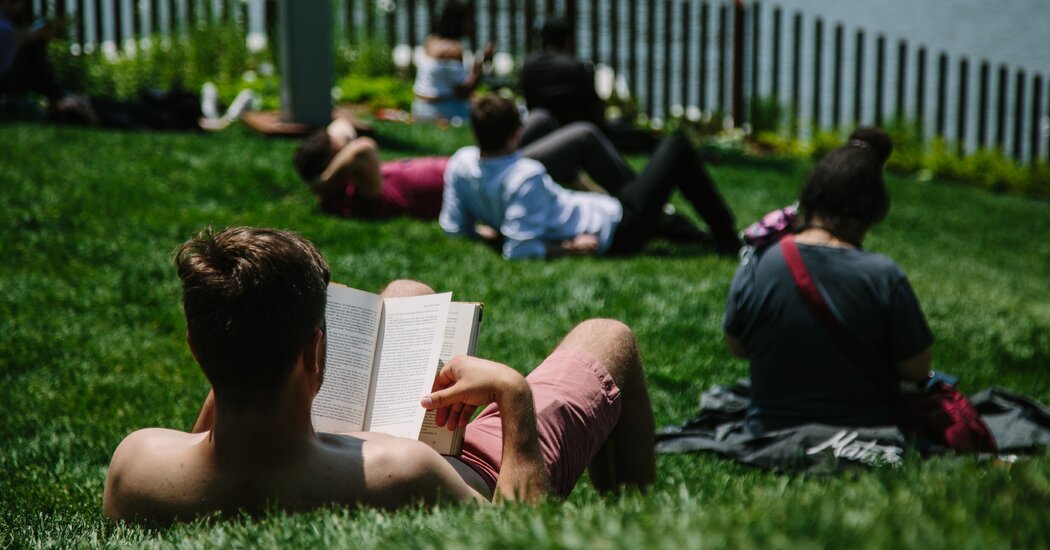 It’s almost Labor Day, which means that our time together is coming to an end. We laughed, we cried, we snacked, we island hopped, we … assessed infection risks. After a long summer of mixed vibes, my newsletter partner Michael Gold and I decided to (virtually) sit down and reflect on all of the strangeness that this season brought upon us. (And instead of our usual suggested activities, scroll down for picks on two types of late-summer refreshers: ice cream and cocktails.)

MICHAEL When we kicked off the newsletter back in May — were we ever so young? — you wrote that we were all “relearning the art of being around each other.” That was definitely true back when “hot vax summer” was on, and we thought vaccines would free us from the anxiety and restrictions that we’d been facing.

Obviously, things look different now, though you and I have still been making summer plans. But given that you covered the return of the nightlife scene, what do you think about how things have shifted in July and August? “Hot vax summer” became “weird vibes summer” at some point, but when?

JULIA I think my summer energy started shifting in late July, when the hype of nightlife’s return started to die down and the fear of breakthrough cases started cropping up in my group chats. But even with all of the risk calculation, mask-wearing and unknowns, this summer was filled with so much joy and excitement, so perhaps the real hot vax summer was the weird memories we made along the way? I mean, I spent most of last summer sitting on a picnic blanket with my roommate in Prospect Park, so the bar for this one was pretty low.

My dreams of seeing lots of live music and feeling carefree on the dance floors of my favorite clubs sort of fell apart in one way or another, but I’d say there were still a bunch of euphoric moments packed into the last few months. Do you feel like you got to live out most of your post-vax summer dreams?

MICHAEL Well, most of my summer hopes and dreams were outdoors, as they usually are. I’m still not sick of park hangs. I still hopped on the train to go to the beach and drank at bars with outdoor spaces. Those are the things that have always meant summer in New York to me, even when the heat index is pushing past 90. Get outdoor time in while the days are long.

But yes, you know that I also did indoor activities I’d been putting off, including going to the movies, an experience I hadn’t had since February 2020. I hit clubs and dance floors during Pride Month, when things felt more carefree. But I also kept doing these things as a new feeling of caution set in. And I think, after talking to people, a kind of dual consciousness emerged. You started second-guessing your plans, but as the Delta variant took over, there was also this thought of “but should I do this now before things get any worse.”

JULIA The last year has definitely made me appreciate simply being outdoors, regardless of how hot (or cold or rainy) it was. I know one of my main agendas this summer was spending a lot of time at the beach, which is probably one of the few activities we focused on that isn’t as feasible during other seasons.

I’ve also realized that food is such a marker of summer for me — the abundance of produce at farmer’s markets and the “it’s too hot to cook” mentality really push me to think outside of my normal routines. Did you find any new exciting spots this summer that you’re going to keep returning to later in the year?

MICHAEL Well, it’s hard to say, and I think that uncertainty is one of the things we’re getting at. What readers didn’t see is the internal debates we started having over, say, whether we could keep recommending people do things indoors given the Delta variant. And I’m hesitant to say that I have any go-to fall plans, because who knows what the landscape will look like. (Though I’ll probably keep drinking on boats as long as the opportunity presents itself.)

But I hope that people took this opportunity, after the lockdown, to really explore their city in new ways. That was our main message: to seize this moment and reintroduce yourself to New York. And I think that’s a guiding principle that can carry over to the fall, at least while the weather’s still nice: get out to neighborhoods you haven’t visited, and do activities you haven’t tried before. Hop off the subway somewhere, look for a mom-and-pop restaurant and ask what there is to do.

Summer may be fleeting, but good drinks and ice cream are eternal, so instead of offering activities around the city, we asked our friends at the Food desk, as well as our cocktail- and ice cream-loving editor, for some of their favorite spots for each.

For some local flavor, I head to the newest Ample Hills outpost, located at the western corner of Prospect Park. The ice cream is made at nearby Red Hook Factory, and it comes in a dizzying array of surprising flavors, including Snap, Mallow, Pop (billed as a “deconstructed Rice Krispie Treat”) and Corn to Run (sweet corn ice cream with a crunchy cornmeal crumble and swirls of blueberry). KASIA PILAT

For over a century, amid a marble countertop and swivel stools, Eddie’s has been doling out housemade ice cream. (Ask to look inside the antique ice box and you’ll likely be rewarded with a view of a giant mound of freshly whipped cream.) On a hot summer day, I go for a coffee frosted, a malted milkshake with two scoops of ice cream (three scoops makes it a “thickshake”). If not for the air-conditioning, you might think it was the turn of the 20th century. DAN SALTZSTEIN

The look of the shop is indeed reminiscent of a laboratory — not exactly fun and inviting — but the gelato is among my favorites. Creamy and dense, each scoop tastes like an intense distillation of its main ingredient. Hazelnut remains my favorite, especially when stacked in a cone and enjoyed on a stroll. GENEVIEVE KO

I have developed a summer tradition of going to the Indian-inspired scoop shop Malai Ice Cream every Friday because the flavors change weekly; every time I find a flavor that I love (like tamarind and date), they swap it out the following week for yet another flavor I love just as much (sweet corn and saffron). Malai serves some of the most exciting flavors I have encountered, and the texture is ideal — creamy, but not so quick to melt into a puddle. And from time to time, they do collaborations with other dessert people around New York, which are not to be missed. PRIYA KRISHNA

I love the old-time ice cream parlor feel of Morgenstern’s, and the variety of small-batch ice creams, sorbets and frozen vegan desserts is ever-changing and always unexpected, from the burnt sage ice cream to boozy, bourbon-laced honey ice cream floats. They also make a killer hand-chopped burger, should you want something savory before your sweets. Or skip the savory and try the ice cream burger — scoops of ice cream sandwiched on a buttered, toasted bun. MELISSA CLARK

For me, there’s no greater summer romance than the one I have with a tall, cherry-dipped cone. As soon as the days grow longer and hotter, I yearn for one, and the ritual that comes with it — the serendipity of coming across a truck, or following its song down the block, then the rush to devour it before the melt drips down your arm. And, of course, there’s that first bite, a plasticky texture yielding to creamy-smooth. You could go without the dip, of course, but that’s the best part. Is it the fanciest New York ice cream? Absolutely not. But is it the most iconic? Absolutely. KRYSTEN CHAMBROT

This tiny vegetarian burger spot in the East Village serves an ever-changing selection of gelato and sorbet. Brooks Headley, a punk musician turned fine-dining pastry chef, has a special interest in nondairy desserts; past vegan gelatos have included coconut-lemongrass, tahini-stone fruit ripple and peanut butter/chocolate ganache/pretzel cookie. Grab a cup (or a pint) and walk down the block to dog-watch in Tompkins Square Park. BECKY HUGHES

What’s that? A ’70s-inspired-tiki-diner-dive complete with disco ball and green shag carpet walls? Bandits is one of those places that fits my every mood. Whether I’m pining for a Narragansett Lager after work or looking for a unique date spot with amazing cocktails, it fits the vibe. One sip of the Lola Bunny (rye, carrot juice, toasted cumin seed and a scotch rinse) scotch-rinsed all my troubles away. VAUGHN VREELAND

Before he opened Bar Goto on the Lower East Side (and then a second location in Brooklyn), Kenta Goto was one of the top bartenders in New York. He is showcasing that talent in a celebration of Japanese-themed cocktails (and very good) bar food, with a few options perfect for a summer refresher, including the Kishu Spritz (sparkling plum wine, gin and lemon) and the Far East Side (sake, tequila, lemon, elderflower liqueur and yuzu bitters). If you want to go simpler, a highball featuring quality Japanese whiskey can’t be beat. Bonus: plenty of outdoor seating. DAN SALTZSTEIN

Inside a former piano factory in the Bronx sits a dimly lit bar named Charlie’s where you can grab my favorite sparkling wine cocktail, the Champagne Charlies (vodka, prosecco, honey, passionfruit and lemon juice). While you’re at it, try their fish and chips. It’s the crispiest fish in the Bronx outside of City Island. GINA FERNANDEZ

One of the summer’s greatest joys is sitting outside on a beach chair drinking a frozen piña colada (with an amaretto floater, no less) at the Commodore. They’ve got a full menu of frozen drinks — made to order in a blender, not from a machine — along with anything else you’d like to drink at a dive. I also can’t mention the Commodore without shouting out their nachos, an absolutely perfect food — especially after a couple of drinks. BECKY HUGHES