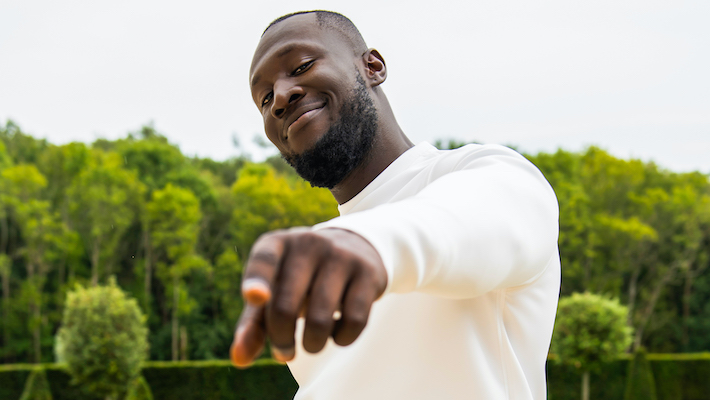 Stormzy released Heavy Is The Head, his sophomore album, in December 2019. With his first solo single in three years, the UK grime pioneer is putting everyone on notice that he still wears the crown. Produced by Knox Brown and mixed by MixedByAli, “Mel Made Me Do It” arrived Friday (September 23). “I been the GOAT so long, I guess it’s not exciting when I win,” Stormzy spits in the opening line. And the flex only gets stronger from there.

The cinematic KLVDR-directed music video spans nearly 11 minutes and packs in over 30 cameos, including Dave, Ian Wright, Jose Mourinho, Stylo G, and Usain Bolt. 90 seconds in, we’re transported to a fictional talk show aptly titled Mel Made Me Do It hosted by Jonathan Ross and Zeze Millz. Stormzy is their guest alongside British sprinter Dina Asher-Smith and journalist Louis Theroux (aka the “My Money Don’t Jiggle Jiggle” guy). Ross asks Stormzy what’s on his mind, which launches him back into his braggadocios bars: “Any time I do a big flex, just ignore me / N****s wanna hear my side of the story / N****s wanna hear a n**** chat like it’s Maury / F*ck that, you n****s better bask in my glory.”

Midway through, Stormzy is flanked by Mourinho. He delivers the line, “I prefer not to speak like I’m Jose.” The former Chelsea and Manchester United

Advertisement
manager (currently with A.S. Roma) puts his finger over his mouth as audio cuts in of his famous quote, “I prefer not to speak. If I speak, I am in big trouble.”
Advertisement

Despite all the clever references and name-drops, the song’s inspiration is singular and simple. According to press release, “Mel Made Me Do It” is “a direct reference to the influence of his long-time personal stylist, Melissa’s Wardrobe.” Her appearance in the video comes roughly one minute before a soul-stirring monologue about Black excellence written by Wretch 32 is narrated off-camera by Michaela Coel, the Emmy-winning creator and star of I May Destroy You.

Over the summer, Stormzy received an honorary doctorate from the University Of Exeter for “outstanding achievements in the field of higher education philanthropy and widening participation.” If anything, “Mel Made Me Do It” reaffirms that he’s more locked into his greater purpose than ever.

Watch the powerful video above.

The Thunder And Rockets Have Agreed To An 8-Player Trade

Tua Tagovailoa Left On A Stretcher After Hitting His Head