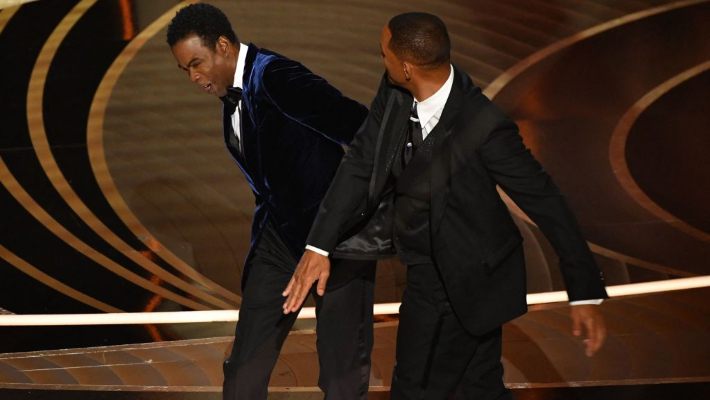 The entire entertainment world came to a halt on Sunday night when Will Smith walked on stage at the Oscars, proceeded to smack the hell out of Chris Rock for telling a joke about Jada Pinkett Smith, walk back to his seat, and tell Rock to keep his wife’s name out of his “f**king mouth.”

Here's the moment Chris Rock made a "G.I. Jane 2" joke about Jada Pinkett Smith, prompting Will Smith to punch him and yell, "Leave my wife’s name out of your f–king mouth." #Oscars pic.twitter.com/kHTZXI6kuL

It was one of the craziest moments in live television history, and after initially seeming like it was possibly a bit, the reaction of everyone certainly indicated this was very real. There was a response from just about everyone, but when the world needs someone to deliver strong takes and immediately stake out a deeply entrenched stance on an issue, we can always turn to one man, our north star in the world of takes, Stephen A. Smith.

Sure enough, despite having an early call-time tomorrow morning for First Take, Smith was dialed on the Oscars and immediately had some thoughts.

Please tell me I didn’t see what I just saw. Somebody please tell me that @willsmith was joking and it was part of the show when he just smacked @chrisrock on National Television. I’m begging y’all….please don’t tell me @willsmith would do something like that???

This was just the beginning — and please note the commitment to tagging the wrong Will Smith throughout his thread, a man who surely regrets locking down that Twitter handle more than a decade ago in this moment — as he quickly stakes claim to the idea that Smith was 100 percent in the wrong here, lighting up the movie star for “staining the greatest moment of his career,” given he was likely to win Best Actor for King Richard later that night.

If @willsmith seriously did that — and he wins the OSCAR — he just stained the greatest moment of his career. You cannot do that S$&@!!Especially as a BLACK MAN, in that position, to ANOTHER BLACK MAN(@chrisrock

Advertisement
) on THAT STAGE. If this was not a joke, Will won’t live this down!!!

For those concerned that Smith was jumping to conclusions too soon, have no fear, he went back and watched the All-22 and confirmed his suspicions that Smith was out of line.

I just saw the RAW footage. @willsmith should be ashamed of his damn self. It was a G.I. Jane joke. Total B.S. If it were @TheRock or someone like that instead of @chrisrock would he have done that shit!

Not only has Smith stained his reputation in Smith’s eyes, but he has ruined the night for everyone. Pack it up, folks, these Oscars are tainted now.

Total BS by @willsmith. If his night is ruined because of this he deserves it. The man has Denzel & Bradley Cooper trying to calm him down. For what? A joke about his wife in G.I. Joe? Come on! The shit was embarrassing! A very very bad look! Love Will. But not after this B.S.

Now, Smith is right in that this will be the only thing people talk about from this night, but his defense of Rock seems to be missing a bit of key information, which is that Jada Pinkett Smith has been very open about her alopecia and its effects on her losing her hair, and Rock’s G.I. Jane joke that he may have thought was benign, seems to have crossed a line in that regard.

It’s also possible that Smith is rattled by Chris Rock’s quick comeuppance, as if people can get slapped on television for inflammatory remarks about someone else, Stephen A. may have to keep an eye out for Kevin Durant or any number of other athletes who might want to pay the Seaport studios a visit.