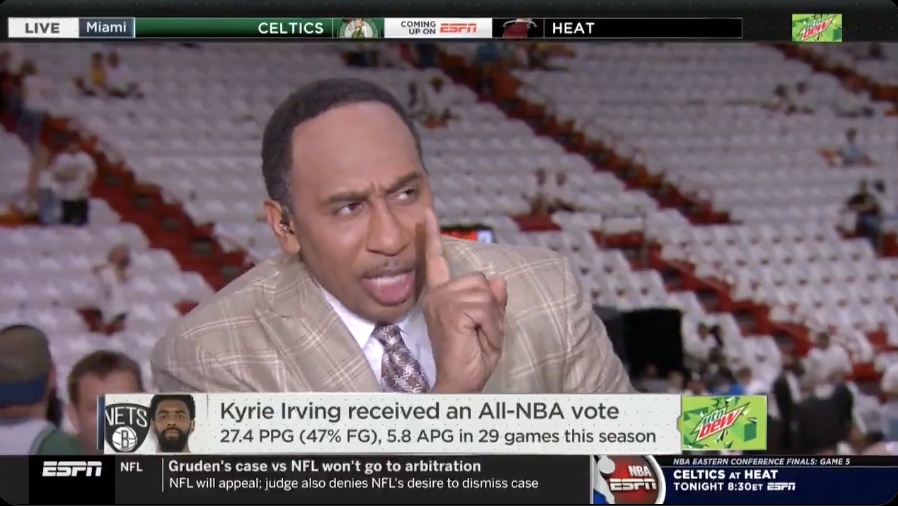 When the All-NBA teams were unveiled on Tuesday night, there weren’t an awful lot of surprises or snubs to be argued, but once individual voting was released, NBA fans got a ch ance to see some of the wild one-off ballots that inevitably get submitted.

The most absurd selection this year came from ESPN’s Jalen Rose, who put Kyrie Irving on the third team over Trae Young, despite Irving having played in just 29 games (to Young’s 76) with lesser production. It was a truly outrageous selection and on Wednesday night, after getting cooked on Twitter all day, Rose owned up to the selection being “a mistake” and saying he was glad it didn’t cost Young a spot — to the dismay of Stephen A. Smith.

Stephen A.’s “WHAT?!” was the reaction of pretty much everyone when they saw Rose’s ballot had Irving on it and kudos to Jalen for at least owning up to it as a bad decision, because there really is no defense of Irving for an All-NBA spot, but given the importance of All-NBA honors to players legacies and contracts nowadays, this is something that needs to be figured out before the ballot gets sent in.

He did have to answer to Stephen A., who lit into him in a hilarious rant that Rose couldn’t even really fight back against as Michael Wilbon just laughed.

Rose is not the first to make a wild selection and won’t be the last — sometimes on purpose and sometimes the result of the dreaded dropdown menu — and as he notes, luckily it wasn’t a situation where missing a vote cost Young a spot. The good news is there’s at least one man who will hold him accountable on the other end of that desk and make sure he can’t live down such a selection.