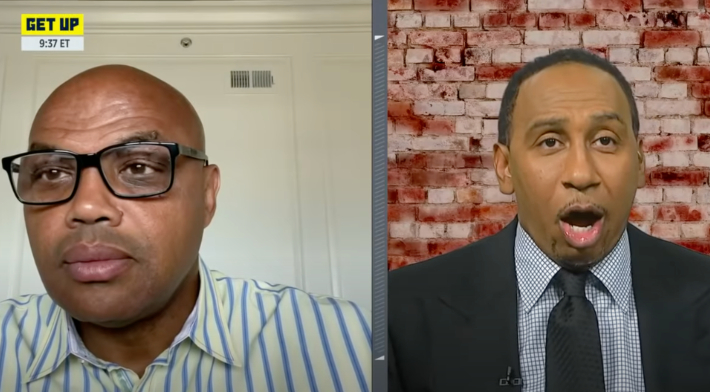 Important disclaimer before beginning this post: In the eyes of Charles Barkley, the greatest basketball player of all-time will forever be Michael Jordan. But on Thursday morning’s episode of Get Up!, Barkley brought up the place LeBron James could potentially occupy in this conversation should he lead the Los Angeles Lakers from the 7-seed to a championship at 36 years old, which Stephen A. Smith did not appreciate.

Smith originally thought that Barkley said that this would put James above Jordan, but Chuck was quick to clarify that it’d just lead to a conversation taking place. Still, this did not sit well with Stephen A.

Barkley and Smith sparred over this, with Smith needing a reminder once or twice that Barkley doesn’t ever plan on placing James atop his GOAT list. There was also the usual mention of how physical the game was when Jordan dominated compared to now — if you have ever heard this conversation, you know exactly how it played out, although it was fun hearing Barkley say “you can only knock down the people who are in front of you” in response to this instead of turning into a curmudgeon who hates the way basketball is played right now, like so many other retired players do.

Anyway, Barkley laid out his thesis once more to end, saying, “LeBron, if he’s able to win the championship, listen, I’m not gonna put anybody above Michael Jordan, but I tell you what, I can see how people would do it is my point, Stephen A.”

A special shout out here goes to Mike Greenberg, who very obviously found this all extremely funny.