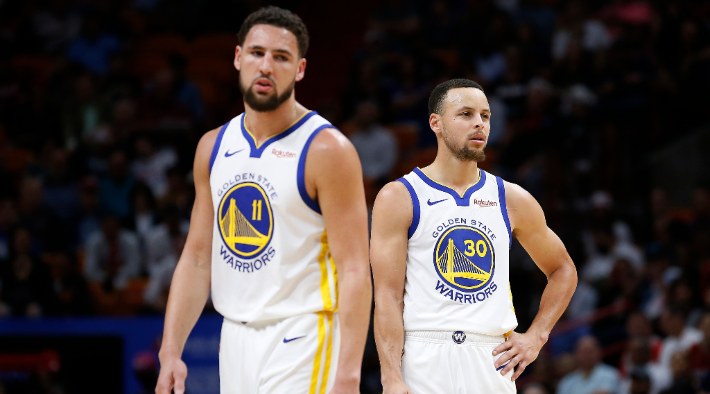 It’s been a tough stretch for the Golden State Warriors these past 18 months. After falling to the Toronto Raptors in the 2019 NBA Finals and subsequently losing Kevin Durant in free agency, serious injuries to their two remaining All-Stars torpedoed the entire 2019-20 season before it even really got started.

But they were looking forward to a return to form this season, with Klay Thompson and Steph Curry both healthy and some new firepower added to the arsenal. Then tragedy struck again in the form of a ruptured achilles for Klay, his second major injury in as many years which will cause him to miss all of next season.

As you might imagine, it was a significant blow to morale among the Warriors, none more so than his backcourt mate Curry, who said he was devastated when he first learned the news during a call with Steve Kerr and GM Bob Myers.

Via Marc J. Spears of The Undefeated:

“He’s the best 2-guard in the league,” Curry said. “To get that call was a gut punch for sure. A lot of tears. You don’t really know what to say because a guy like that is having to go through two pretty serious rehabs now. But at the end of the day, we have to have his back. We hope that he is around and a part of what we do through his rehab and staying connected with us.

“He can come back strong. He’s a guy that loves the game so much. He is going to do whatever it takes to get back out there on the floor and be himself. That’s what we hope and the confidence that we have. Two-and-a-half years of rehab is tough for anybody. We’re hoping for the best.”

Prior to the injury, the Warriors had every intention of working their way back in championship contention this year, a goal that now seems nearly far-fetched without their second-best player. Still, it’ll be interesting to see how they respond. Golden State has added some intriguing young talent in recent months Andrew Wiggins and Kelly Oubre Jr., along with draftee James Wiseman. The question is whether they can put all the pieces together at the right time.