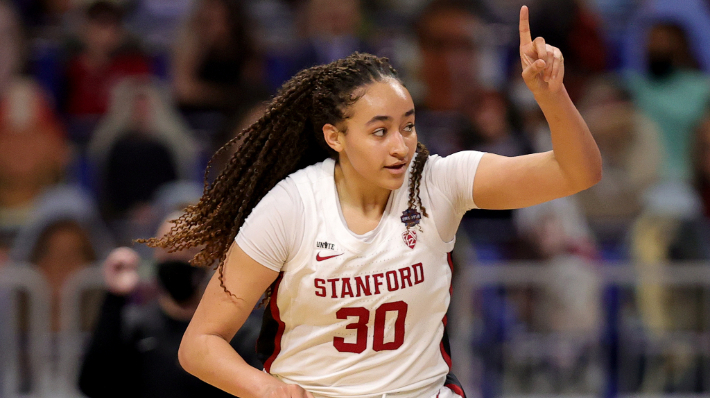 The 2021 NCAA Women’s Basketball National Championship Game saw two Pac-12 rivals go head-to-head in San Antonio, as the top-seeded Stanford Cardinal faced the 3-seeded Arizona Wildcats. Early, it looked like it would be all Stanford, as they jumped out to a 14-3 lead in the opening minutes, but Arizona had an answer for every run they made to stay within reach. The Cardinal led by seven at the half and then just three going into the fourth quarter, as the Wildcats followed the lead of the sensational Aari McDonald to reel them in.

The fourth quarter was a nailbiter, with both teams going back and forth, but as close as the Wildcats got, they could never quite take control of the game. McDonald was sensational, scoring 22 points for Arizona, carrying the load offensively as she’s done all tournament, and hitting some clutch buckets late.

However, Stanford followed the lead of Haley Jones, who finished the night with 17 points and eight rebounds to lead the way for the Cardinal, showing a tremendous gift for finding space and scoring at the rim, even through contact.

The Cardinal’s size frustrated the Arizona offense for much of the night, forcing McDonald and the Wildcats to find offense from the outside and they simply couldn’t consistently hit jump shots to reel Stanford all the way in. Cameron Brink’s presence inside was massive for Stanford, as the freshman had 10 points, six rebounds, and three big blocks. Late in the game, the Cardinal left the door open with some rough offensive possessions, but their defense was able to hold on and force McDonald into a very difficult, fading shot at the buzzer that went begging, as Stanford collected its third national championship in program history — and first since 1992 — in a 54-53 win.

Stanford’s defense held Arizona to just 28.8 percent shooting from the field and 27.3 percent from three-point range on the night, as the Wildcats struggled to find a rhythm against the Cardinal length. They kept themselves in it at the free throw line, going 13-of-18, as Stanford wasn’t exactly lighting it up from the field themselves, shooting 42.1 percent overall and just 4-of-14 from three-point range. However, in a battle of strong defenses, it was Stanford that got the last stop when they needed it, once again keeping McDonald from getting to her spot inside.

For Arizona, it’s a disappointing end to what was a magical run, but McDonald cemented her status as a star on both ends of the floor and the resiliency they showed battling from down double digits on multiple occasions to have a shot to win it at the buzzer was impressive on a night where they didn’t necessarily have their best on offense.