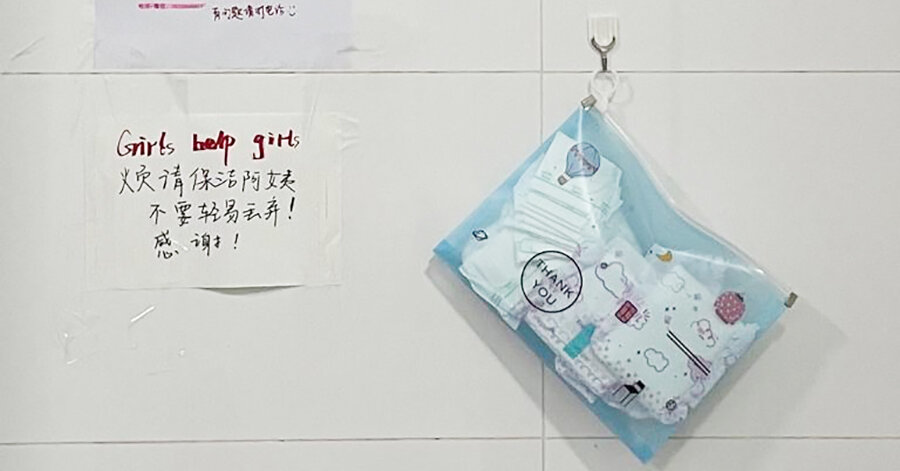 HONG KONG — It started when a single box of free sanitary pads appeared in a middle school classroom in October.

Then a plastic container with pads was attached to the walls of four bathrooms in a university in Shanghai.

By Monday, boxes and bags of individually wrapped pads had popped up outside bathrooms in at least 338 schools and colleges across China.

Each carried a version of the same instructions: “Take one, then put one back later. Stop period shaming.”

The pads were part of a broader effort to increase access to a product that not all students can afford, and to strip away the shame surrounding a natural bodily function that has long been stigmatized, according to organizers of a grass-roots campaign called Stand by Her.

Founded by Jiang Jinjing, a women’s rights advocate, the campaign aims to push the subject of period poverty — what the United Nations describes as the financial struggle low-income women and girls face to afford menstrual products — to the forefront of the national conversation. Ms. Jiang, who gained prominence in March after mobilizing deliveries of sanitary pads to hospitals in Wuhan, China, during the coronavirus outbreak, began the campaign to fight period poverty this year.

In an interview published in September by the online Shanghai magazine Sixth Tone, Ms. Jiang said she used to believe that menstrual products were inaccessible only in impoverished rural Chinese provinces, but soon realized that the phenomenon was widespread.

“This is so-called women’s poverty,” said Ms. Jiang, who is more widely known by her pen name, Liang Yu. “When we talk about poverty, women’s needs become automatically invisible.” She has declined a request for comment.

Her group raised $126,000 in a crowdfunding campaign in October to send pads to 2,000 teenagers in rural areas and to provide information about periods and sex education. A middle-school teacher took inspiration from Ms. Jiang’s efforts and placed a box with free sanitary pads in her classroom, telling her students to take one and replace it later.

Ms. Jiang posted photographs sent by the unidentified teacher on Weibo, a Chinese social media platform. She encouraged others to follow suit, and the campaign surrounding what she called “mutual aid boxes” took off.

Boxes with pads began appearing at the entrances of women’s bathrooms in schools and colleges across the country. Students at the East China University of Political Science and Law in Shanghai attached boxes outside four women’s bathrooms on campus.

Fiona Fei, a 23-year-old graduate student at Guangxi University in southern China, was inspired to hang zippered bags with pads around campus bathrooms in October.

She said in a phone interview on Monday that patriarchal thinking and incomplete biology lessons in schools had taught girls to view their bodily functions as indecent.

“A lot of people around me feel shame,” she said, “and so we want to break through this shame together.”

The inability to afford menstrual products is common in many countries, and that inaccessibility is often compounded by social mores that view menstruation as a taboo topic.

Women and girls in Nepal have been banished from their homes to huts during their period. At least one or two women die in the huts each year from exposure, animal bites or smoke inhalation after building fires to stay warm during the Himalayan winters.

A study published in July by the Maple Women’s Psychological Counseling Center in Beijing found that nearly 70 percent of respondents said that they tried to hide the sanitary pads they carry around, and more than 61 percent used euphemisms for their period.

But the campaign has also found male supporters.

Conor Yu, a 22-year-old graduate student at Shanghai International Studies University, said that he never learned about menstruation in school but was influenced by feminist friends to pay attention. He set up boxes outside women’s bathrooms on campus and asked permission to put up informational posters in the library, but that request was denied.

The subject of periods has become less taboo in China in recent years.

In 2016, the Olympic swimmer Fu Yuanhui shattered barriers with a poolside interview in which she revealed that she had gotten her period before the race.

This summer, period poverty came under renewed scrutiny in China because cheap, unbranded pads that were not individually wrapped were put up for sale by an unidentified seller on an e-commerce platform. Some people questioned why anyone might buy such potentially unsanitary pads. Two online buyers suggested they had purchased the supplies because they could not afford more expensive products.

In October, a 17-year-old girl in Chengdu raised nearly $200,000 in an online campaign to send pads to two high schools in Liangshan, a region in the southwestern province of Sichuan that has one of the highest poverty rates in the country.

Ms. Jiang, the founder of Stand by Her, said in a post online: “The process of having loud and frequent discussions will remove the stigma from menstruation. This will liberate thousands of women who are ashamed of it.”

She noted that “pads” and “periods,” once taboo words, were being more commonly discussed in the country.

“This already is a huge breakthrough and milestone in women’s history,” she said.