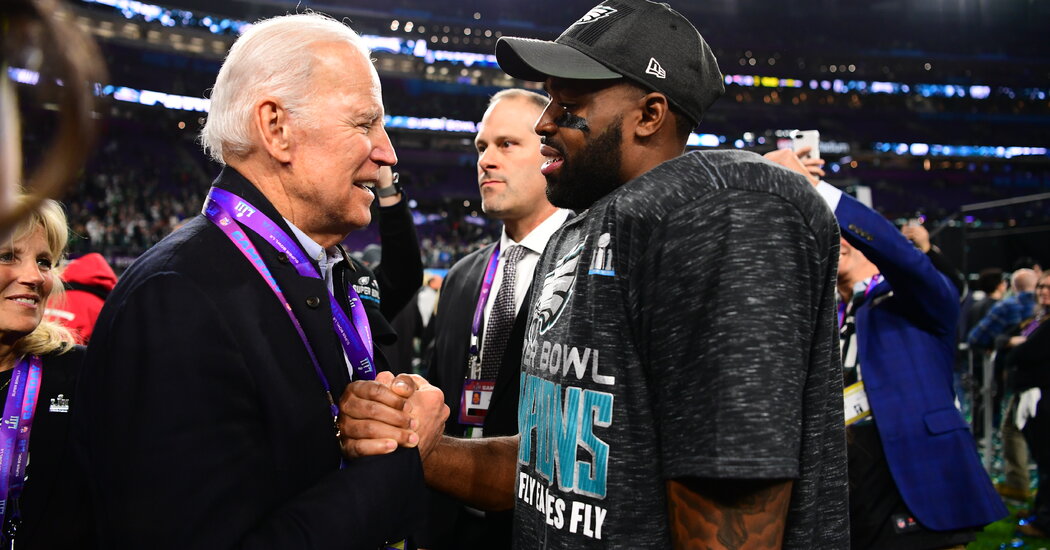 Archmere Academy, a private Catholic high school in Delaware, arrived as a heavy underdog to open its football season in the fall of 1960.

Its opponent, St. James High School, a New Jersey powerhouse, had battered Archmere by 11 touchdowns in a scrimmage a year earlier.

Yet Archmere had an unlikely weapon: Joe Biden.

The Archmere coach had filled his roster by recruiting nearly half the team from the lunch line and devised an offense that relied on power running, misdirection and the occasional pass. On a reverse in that game, Biden scurried 40 yards untouched for a touchdown in a 12-0 upset.

“He was a halfback, and he scored some running touchdowns too, but he was the guy that was the main pass catcher,” one of Biden’s teammates, Michael Fay, recalled. “We were seniors in 1960, so throwing the ball was almost a mortal sin. But he caught seven or eight touchdown passes in eight games, which was a lot for back then.”

President Trump has had a long association with sports, starting as a baseball player in his youth, and more recently as an avid golfer with something to say, often incendiary, about athletes and leagues.

Though President-elect Joseph R. Biden Jr. has not worn his sports allegiances on his sleeve, as many politicians have, playing fields have often intersected with his life, going back to his childhood, when sports provided a universal language of communication while he managed a stutter. He spent his vice presidency under a noted sports fan, President Barack Obama, who this summer counseled N.B.A. players who boycotted playoff games in a protest of the shooting of Jacob Blake.

“You see these two things happening in his life at the same time,” Evan Osnos, the author of “Joe Biden: The Life, the Run, and What Matters Now,” said, referring to Biden’s high school days. “One, he’s breaking the back of the stutter, and two, he’s finding his place on the football field. Those converged to give him this altered sense of himself, and that’s really the beginning of what was at that point almost a ludicrously ambitious notion of what he might be able to do in life.”

Still, even as athletes such as LeBron James and Draymond Green have celebr ated his victory on Twitter, Biden, unlike Trump, has shown no taste for wading into the politics of sports.

The antagonistic relationship helped push many athletes into social and political activism, including several who participated in voter registration and turnout drives.

“I don’t think that goes away when Trump is off the scene, even if you don’t have that single focal point that they did before,” said Eric Schickler, a political-science professor at the University of California, Berkeley.

For Biden, sports have been more a balm.

Members of the Pittsburgh Steelers visited the hospital beds of his young sons, Hunter and Beau, in 1972, after the car crash that killed his first wife, Neilia Hunter, and his young daughter, Amy.

Biden celebrated on the field when the Philadelphia Eagles won the Super Bowl in the 2017 N.F.L. season. The Washington Nationals have already invited him to throw out the ceremonial first pitch on opening day. (The White House declined the Nationals’ invitation for Trump to throw an opening day pitch in 2017, citing a scheduling conflict.)

Biden recently congratulated the basketball star Sue Bird and the soccer star Megan Rapinoe on their engagement. He has sided with members of the women’s national soccer team in their dispute with U.S. Soccer over pay equity. He said he would dismantle Education Secretary Betsy DeVos’s new Title IX rule regulation, which could have an impact on college athletics and the reporting of sexual assault allegations on campuses, and pledged to “restore transgender students’ access to sports, bathrooms and locker rooms in accordance with their gender identity.”

“You’re going to see very clearly that Joe Biden looks at sports as a natural form of American community, which means not necessarily that it’s quiet,” Osnos said. “It means that it’s contested. It’s a place for politics. It’s a place where we live out our differences as much as the things that bring us together. In the purest sense, I think he’s a guy that believes that you can kneel.”

Biden campaigned with a focus on reining in the coronavirus pandemic, and so he may be called on to take a stand on whether leagues can or should have spectators at games.

A quieter sports advocate in the White House does not necessarily mean a less passionate one. Biden has recalled his time on the football field as memorable and influential.

The Archmere football team was 8-0 in Biden’s senior year, after a 1-6 record a year earlier.

He credited the coach, E. John Walsh, then fresh out of college, with energizing the program and unifying the team. “He urged us to play the game the same way you lived your life, with passion and integrity,” Biden said at Walsh’s 2012 induction into the Delaware Sports Museum Hall of Fame. “No matter how good you were, Coach always stressed that you were a teammate first.”

Fay, Biden’s teammate, said that season made all the players on the team believe more in themselves and in what was possible.

“It made us all believe that we were maybe a little bit more than what we thought we were beforehand,” Fay said. “It made the impossible seem possible.”

Biden also played on the school’s baseball team, as a corner outfielder, but he is not remembered as much for that.

“He was a good football player,” said Bob Markel, one of Biden’s baseball teammates at Archmere. “He wasn’t as good a baseball player, shall we say?”

Biden’s baseball tenure, though, may have been cut short by a leg injury sustained while attempting the hurdles.

“He caught the edge of the hurdle right on the inside of his thigh,” Fay said. “He cut it so deeply that it didn’t even bleed. You could see the muscle past the skin. It was an ugly wound, and he had to have about three layers of suture sitting there, and it kind of knocked him out of his senior year of baseball. The baseball coach was not a happy camper about that.”

After Archmere, Biden attended the University of Delaware. He played spring football there, but then left the sport to focus on academics. And a girlfriend.

In his book, Biden wrote that he planned to continue playing football before meeting Hunter, pursuing her instead of the sport. In 2012, he erroneously said that he had played college football in 1963.

He did continue playing recreationally after college. He recruited Delaware players for a touch football team named the Orangemen, in honor of Syracuse University, where he attended law school. That team, Fay noted proudly, also went undefeated.

“We were probably the roughest touch football team you’ve ever seen,” he added.

Through his mid-30s, Biden also participated in a touch football game in Wilmington, Del., every Thanksgiving morning. “We called it the Toilet Bowl,” Markel said.

Biden had more pressing matters as his political career advanced. “He introduced himself to a lot of people,” Markel said. “I think that’s why he became class president, and certainly helps in the political career that he enjoys connecting with people. It’s not just talking to them or talking at them, he connects with them.”

The teammates and classmates have stayed in touch through the decades.

Biden, whenever possible, joins them, retracing his athletic glory days.

“Joe hasn’t changed since 1957,” Fay said. “That’s when we first met as freshmen in high school. He’s straightforward and whatever he says he means. He sticks to his word.”