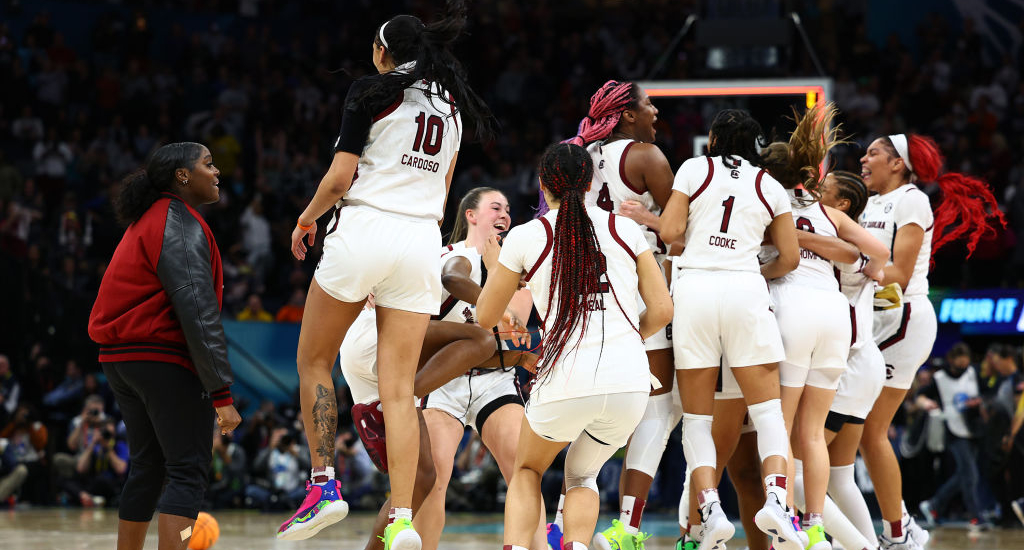 Sunday night was a coronation for the South Carolina Gamecocks, as the best team in women’s hoops led wire-to-wire in a thoroughly dominant performance against the UConn Huskies to win their second national championship.

The Gamecocks jumped on the Huskies from the opening tip, taking a 13-2 lead in the blink of an eye and quickly asserting their dominance on both ends of the floor. Coming into the game the question on everyone’s mind was how UConn would deal with South Carolina’s size, namely AP Player of the Year Aliyah Boston, and early on it was apparent the Huskies didn’t have an answer.

South Carolina dominated on the glass, particularly on the offensive end where they got 20 boards alone, creating one second chance opportunity after another. Boston led the way with her board work, hauling in 14 to go with nine points, three assists, and a pair of blocks.

With so much focus on Boston from the Huskies defensively, it opened up opportunities on the perimeter and Destanni Henderson stepped up to have a monster performance, leading all scorers with 26 points on 9-of-20 shooting, including a 3-of-6 night from three, as she attacked the UConn defense and punished them for overhelping on Boston in the pick-and-roll game.

On the other end of the floor, South Carolina simply overwhelmed the Huskies with their length and activity, forcing 15 turnovers and holding UConn to just 41.5 percent shooting from the field (and 25 percent from three). That activity, coupled with their dominance on the boards, allowed them to hold UConn to one shot on most every possession (UConn had five offensive boards all game) and also get out and push the tempo to apply further pressure.

Paige Bueckers was hounded throughout by Henderson and the aggressive South Carolina defense, finishing with a team high 14 points, but needed 13 shots to get there as the Huskies star just could not establish a rhythm. Caroline Ducharme gave them a boost off the bench with nine points as their second leading scorer, and the Huskies would make a third quarter run to make things competitive and cut the deficit to six points.

But the Gamecocks quickly regained control in the fourth quarter and opened up a double-digit lead again on their way to a 64-49 win, as Dawn Staley hoisted her second national championship trophy.

It was a sensational performance from South Carolina, who had some struggles early in the tournament establishing their offensive rhythm but found it as the games wore on and saved one of their best performances for last, leaving no doubt who was the best team in the title game. The 2022 team joins the 2017 team in hoisting the championship trophy, and also earns the distinction of being the first team to beat the UConn women in a title game (the Huskies entered the night 11-0 in championship games).