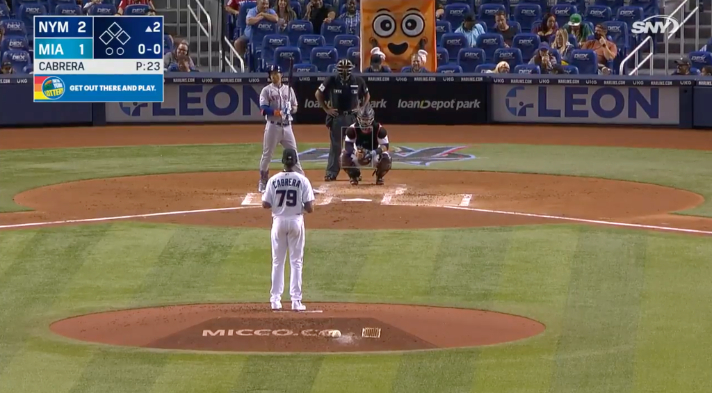 Every now and then, someone (or a group of people) will dress up like umpires and sit behind home plate at a baseball game and get really into the action. An example from a few years back during a game in San Francisco between the Giants and the New York Mets:

There must be something about the Mets that lead to people doing this bit, because on Tuesday night, someone decided to wear a costume to their game against the Miami Marlins and hang out behind home plate and have a good time. The catch here was that the fan did not head to, uh, the umpire store and pick up the necessary equipment to pull of an Angel Hernandez fit.

Instead, this person hit up their local Party City or those stores that pop up in spaces that used to belong to a Circuit City in the 1990s in a mall and now become Halloween stores once a year and picked up a Cinnamon Toast Crunch costume.

The best moment did not come from the person in the costume doing anything particularly silly — well, beyond the mere fact that they dressed up like this and went to a game the Mets won, 9-4. Instead, that came when New York’s broadcast team wondered just what the heck was going on and legendary play-by-play man Gary Cohen thought this was SpongeBob.

I suppose you can see how Cohen got to that point, but regardless, it is very funny that he mixed up a cartoon character and a single individual piece of a cereal.