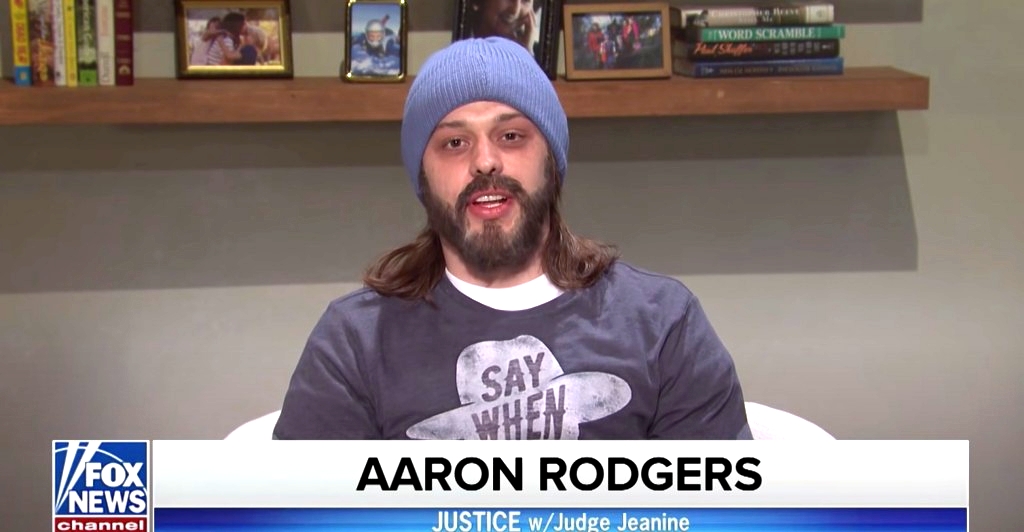 If there’s was one sure thing to expect on this week’s episode of SNL, it was that new anti-vax hero and almost-Jeopardy host Aaron Rodgers was going to be in the crosshairs of the show’s writers in the wake of the controversial statements he made this week about COVID vaccines while looking like “the weed dealer who wouldn’t let you leave until you sat and watched 30 minutes of Faces of Death on VHS in 1996.”

In the event you were secluded on an island for the past week devoid of contact with the outside world, the reigning NFL MVP and State Farm spokesperson went on Pat McAfee’s show to say: “I realize I’m in the crosshairs of the woke mob right now. So before my final nail gets put in my cancel culture casket, I think I’d like to set the record straight on so many of the blatant lies that are out there about myself right now…I’m not some sort of anti-vax flat Earther. I am somebody who’s a critical thinker.” Rodgers went on to note that he feared that getting vaccinated would cause him to become sterile

Advertisement
and that he was consulting with Joe Rogan about his course of treatment for COVID.

That all said, this predictably led to Pete Davidson’s Rodgers appearing on Cecily Strong’s delightful version of Judge Jeanine Pirro’s unhinged Fox News show where she blasted the “vaccine Gestapo” and praised Rodgers for essentially saying, “Screw you, science, I know Joe Rogan!”

You can watch the full segment above, and/or the Aaron Rodgers portion of the segment below.