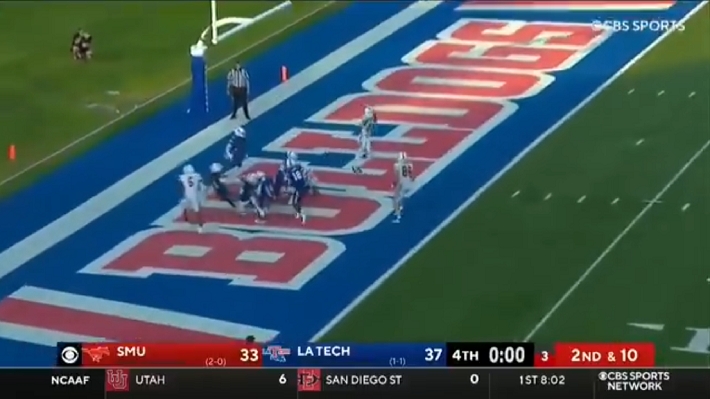 SMU and Lousiana Tech might not be in the same conference, but there was plenty to play for on Saturday when the two G5 programs met each other. SMU was coming in with an undefeated record while LA Tech was hoping to push their record above .500. Both these programs are competent and strong G5’s that can make some noise in a bowl game if they get there, so every win is important.

After LA Tech banged home a field goal to give themselves a four-point lead late, it didn’t seem good for SMU. They were gonna have to drive down the entire length of the field with only 36 seconds to play. However, knowing the situation LA Tech played this smart and made sure to not give up the big play. While SMU did gash the defense for a handful of chunk plays they were still left at LA Tech’s 33-yard line. Good enough for hail mary range, but not good enough to draw up more th an a prayer. Well, there is a reason they call it a Hail Mary.

Absolute madness. While everyone went to where the ball was going to go so they could fight over it, one wide receiver just happened to be in the perfect place at the perfect time. Tipped ball caught, ball game for SMU. This is why they always try to tell defenses to knock it down rather than try to catch it or bat it up in the air, but with so many bodies around there was really nothing more LA Tech could do in this situation. SMU just got the lucky bounce.

With this, SMU is now 3-0 with a contest against former Southwest Conference rival TCU coming up. Wouldn’t it be something if the Mustangs pulled off the upset and went into AAC play undefeated? Meanwhile, LA Tech begins conference play next week against North Texas.