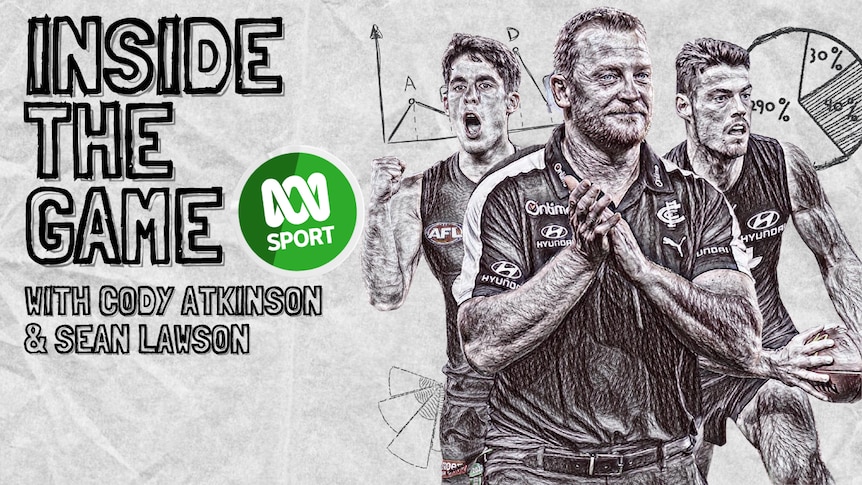 The year is 1995, and the footy world is painted in a shade of blue.

That year’s grand final was one of the most anticipated in years, matching the top two teams on the ladder against each other on the last day of September.

Both sides won their preliminary finals by more than 10 goals, sweeping through their toughest rivals with ease.

Their one encounter through the season was a thriller, with Carlton winning a nail biter by just three points.

But the grand final was not an epic for the ages, instead Carlton blew Geelong off the park by half-time.

Gary Ablett was kept goalless for the first time in three years, and Carlton set a record for most wins in a year, with 23.

By the end of the game, Carlton had sealed their record 16th premiership, and were on top of the footy world.

Carlton could, literally, do no wrong. Then, Peter Dean fell from the podium.

As time has passed, Dean’s tumble has seemed less like a celebration gone awry and more like a metaphor for the coming two and a half decades.

A couple of near misses in the years following were perhaps signs of false hope, with their loss to the Roos in the 1999 grand final being their last real stand.

Years in the wilderness followed, punctuated by a period of Brett Ratten-led competency.

Now, the Blues sit inside the top four and the Dean-inspired stumble may appear to be coming to an end.

With new coach Michael Voss at the helm, long-suffering Blues fans are hoping that their time is now, and that this isn’t another false dawn.

Even in the darkest of times, there are moments of light along the way. This was no different for Carlton.

The Blues’ last coach, David Teague, started with an impressive early burst of form before reality began to set in again.

Under Teague, the best moments of footy were captivating, aesthetically pleasing, counter-attacking footy that revolved around a prototypical key position forward.

When it came off, it looked spectacular. However, there were trade-offs.

For all the excitement created when Carlton got out on the break, their defence was prone to letting equally exciting attacks in the other way.

With waves of players rushing ahead of the ball, and quicker ball movement prioritised, limited pressure was placed on the ball and deeper defenders were often left isolated or alone.

No side allowed more contested one-on-ones than the Blues last year, and their ability to slow sides after turning it over was limited.

Fixing those structural defensive issues was a critical issue for Voss, but perhaps not the only one.

Overall, the signs seem positive for Carlton so far this year.

Carlton are setting up more cautiously at contests and not racing ahead prematurely.

Most prominently, the Blues seem to be defending the counter-attack more effectively.

This has included deploying the spare defenders able to assist in closing down those high-value, one-on-one opportunities.

It has taken away a little bit of the sting of their attack from turnovers but, in turn, they can stop opponents from putting up cricket scores.

It’s not just the defence that has improved so far this year.

Voss — as one of the most-damaging clearance players of his era — has an innate eye on not only how to win the hard ball but also how to make it useful.

At Port Adelaide, he helped to develop the Power group into one of the strongest in the competition, one that focused on both sides of the ball.

This strength has transferred over to the Blues’ early season form.

So far this year, Carlton has had one of the most-damaging clearance set-ups of any team in the competition.

Part of the equation is a more even focus on who is targeted in the middle, but part of it is personnel.

The recruitment of Adam Cerra and George Hewett in the off-season has given the Blues two more quality, ball-winning options, allowing Sam Walsh to work more on the outside.

This has forced opposition teams to focus less on shutting down Patrick Cripps, giving their talisman more space to do what he does best.

Cripps has responded with a career year, and has finally added a serious forward string to his bow. He has registered career highs in goals and marks inside 50, a remarkable feat considering he has only played seven and a bit games this year.

Last year, Carlton was heliocentric around Coleman medallist Harry McKay, who was targeted as much as any player in the competition.

That led to a somewhat predictable attack, and one that was concentrated on relatively few contributors.

Thanks to the return of Charlie Curnow from injury, and some tactical repositioning, the Blues have more ways to hitting the scoreboard this year.

McKay has worked further up ground, and Jack Silvagni seems revitalised in a ruck-forward role.

Last year, McKay was targeted 248 times inside 50, the third-most of any player in the competition.

The next-highest Carlton players were Eddie Betts and Levi Casboult, with 72 targets each.

While McKay is still in the top five for targets this year, with 85, Curnow has already been targeted 73 times this year.

When one of these three taller forwards is playing further up the ground, or taking a spell on the bench, Cripps tends to float forward more.

This creates mismatches across the opposition’s defensive set-up, one that Carlton is primed to capitalise on.

In short, the Blues are playing a well-rounded style of footy, one that is markedly improved on years past.

It’s a style that, combined with the sheer amount of talent on the list, has the Blues primed to play finals footy.

The Blues are still blue?

In his first senior coaching stint at Brisbane, Voss was able to coax an ageing Lions outfit into finals in his first year before facing four years well outside of finals.

Some debate still exists in northern footy circles about the cause for the Lions decline, one which was only halted by the recent, Chris Fagan-led rebuild.

Voss has been given the rarest of things in footy: a true second chance.

Carlton has stocked up on proven senior talent via trades and free agency in recent years, combined with a fair sprinkling of high draft picks. Few can contest that the raw talent is there.

The second half of the year is always more challenging for sides that have transformed over the off-season. The opposition analysis gets sharper, and the rest of the league starts to work out the nuts and bolts of what is going on.

Carlton’s early season form has also been boosted by a relatively soft schedule to date, beating just one side currently in the top 8 (Richmond in eighth place).

The run home shapes as being significantly tougher than the start of the year.

Few can deny, however, that the Blues are playing good footy.

So good, in fact, that die hard Bluebaggers across the country will be hoping that their side will win their first final since 2013.