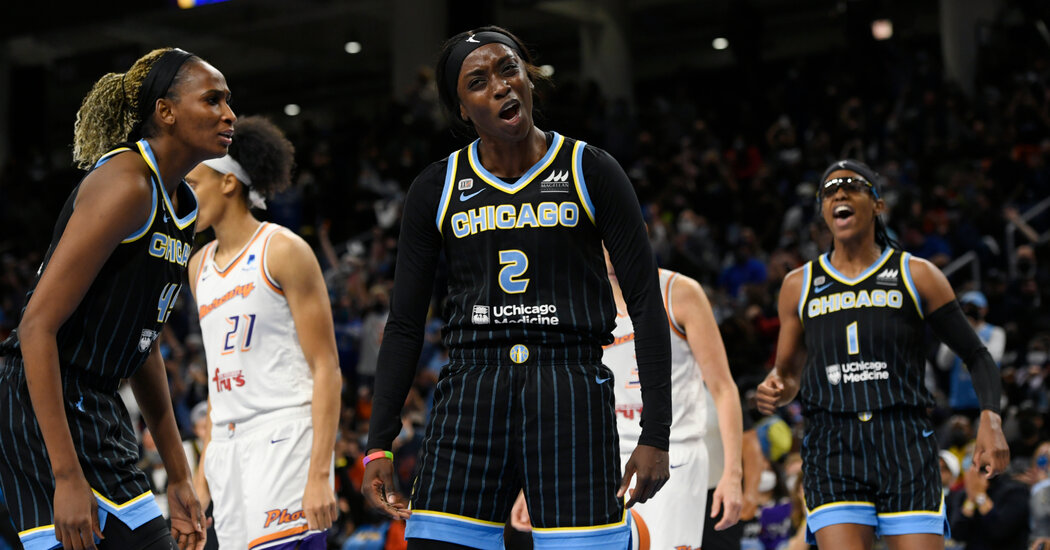 CHICAGO — It has been more than 23 years since Michael Jordan stole the ball from Utah Jazz forward Karl Malone, drove the length of the court and nailed a jumper to give his Chicago Bulls a 1-point win in Game 6 of the N.B.A. finals. The unforgettable sequence secured the Bulls’ sixth championship and had Chicago fans reveling in a shared moment of pride.

It has been a while since this city’s pro hoops fans have known that feeling, but the W.N.B.A.’s Sky have kept them familiar with high-stakes basketball.

Draped in blue and yellow jerseys Friday night, eager Chicago fans packed into Wintrust Arena to watch the Sky take on the Phoenix Mercury in Game 3 of the W.N.B.A. finals.

The city’s yearning for a championship manifested in the atmosphere. Fans swirled towels above their heads during the Sky’s player introductions. They booed and heckled Mercury players every possession. And they roared and bounced up and down all over the arena with every made Chicago basket. Every. Single. One.

Late in the game, after Chicago was well on its way to an 86-50 victory

Advertisement
that would put the Sky one win away from clinching their first championship in franchise history, a Sky fan yelled “better luck next year” at the Mercury players on the court.

By the fourth quarter, both teams had already subbed out their starters. “Sky in four” chants erupted as Chicago’s bench entered, making one reality clear: Chicago is, again, ready for a championship moment.

Game 4 is Sunday in Chicago. The Sky lead the best-of-five series, two games to one.

“I really feel Chicago. I really feel it,” Sky Coach James Wade said after Friday’s game. “The way they came out and supported, you can feel the passion that they have. It just gives us more passion. Hopefully we can see the same things Sunday, and we can all celebrate together.”

Chicago’s ability to rely on its stars’ strengths has the team on the verge of a title. Candace Parker’s vocal leadership on both ends of the floor. Guard Courtney Vandersloot’s skill in finding open teammates and facilitating the offense (she had 10 assists on Friday). And Chicago has increasingly relied on forward Kahleah Copper’s athleticism, the way she blows past defenders and how she takes advantage of one-on-one matchups — skills that have made her one of the most impactful players in the finals.

The sixth-seeded Sky used a dominant team defensive performance and a statement game from Copper to gain potentially series-clinching momentum in Game 3, after upsetting the fifth-seeded Mercury in Game 1 and falling short in overtime in Game 2. They tied a W.N.B.A. finals record for the largest lead at halftime (22), set the record for largest margin of victory in a finals game (36) and held the Mercury to 25.8 percent shooting on the night.

Parker, who is from the Chicago suburb Naperville and signed with the Sky after 13 seasons with the Los Angeles Sparks, had 13 points, 3 assists and 4 rebounds.

Copper scored 20 of her 22 points in the first half as the Sky pulled away early, eliciting deafening roars from the home crowd, which included the Chicago native Chance the Rapper, N.B.A. Commissioner Adam Silver and Chicago Bears quarterback Justin Fields.

“The one thing that probably doesn’t get talked about as much — her competitiveness,” Wade said of Copper. “That’s what it takes to get to the next level. We used to see it every day, even when she wasn’t playing as much. So it’s no surprise to us because we know what we have in her. Now she’s letting the world know. It’s just who she is.”

Mercury Coach Sandy Brondello said after the game that Phoenix simply could not handle Copper, who was 6 of 10 from the floor.

“We allowed her to sweep and go baseline way too much,” Brondello said. “When she’s shooting it from outside, you’ve got to give up something, don’t you? And she was making it. She had a really good game, and obviously that took the life out of us a little bit.”

The scoring of Phoenix’s Big Three, Diana Taurasi, Brittney Griner and Skylar Diggins-Smith, has kept the team alive in critical games throughout the postseason. They combined for 56 points in the decisive Game 5 of the semifinals against the Las Vegas Aces. Now, even after an unusually poor shooting night against the Sky in Game 3 — they were a combined 10-for-36 from the field — they can be the key to keeping the Mercury’s season alive Sunday.

Teams this postseason, and during most of the regular season, have had few answers for Griner’s dominance under the basket. She is a nightmare one-on-one matchup in the low post, and has gotten better at passing out of double teams to find open teammates on the perimeter.

The Sky crowded Griner early, though, and held her to just 4 points in the second half Friday, for a total of 16 after she had scored a career-playoff high 29 in Game 2.

When she got open looks, “she just missed them,” Brondello said. “They played in her space a little bit more. I think in the second half, you saw she went to the right hook.”

Brondello added later, “She’s still someone we need to get the ball to as much as possible.”

Phoenix last won the league title in 2014, when it defeated the Sky for its third championship in franchise history. This time, both teams have had a difficult path to the finals. The Sky finished the regular season with a 16-16 record, and few pegged them to make the finals. The Mercury limped into the postseason on a three-game losing streak, plagued by injuries.

Could Sunday mark the end of an unlikely playoff run for both teams?

With her head lowered in a postgame news conference and Taurasi sitting to her left, Diggins-Smith summed up what the Mercury have to do to extend the series and send it back to Phoenix.

“Charge it to the game,” Diggins-Smith said, indicating Phoenix’s need to quickly move past Friday’s disappointing performance and refocus.

“We didn’t lose the series tonight.”