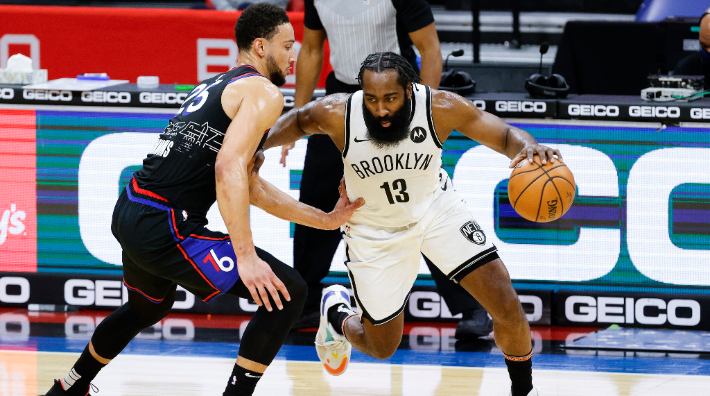 The Philadelphia 76ers continue to navigate the 2021-22 season without Ben Simmons on the floor, even as he remains on the roster. On Thursday, a report emerged indicating that Daryl Morey and the 76ers have a list of players they would consider in a swap for Simmons that happens to be 30 names deep. At the same time, there is seemingly no urgency on Morey’s side, leaving many exasperated by the standoff.

Later on Thursday, however, Keith Pompey of the Philadelphia Inquirer shed a bit of light on the situation and brought up a familiar name in James Harden. Pompey indicates that “several members of the front office are keen on the idea of keeping Simmons this season and pursuing Harden from the Brooklyn Nets for a sign and trade.”

On one hand, this is a logical progression for Philadelphia, particularly when remembering that Morey has long loved Harden dating back to their collective time in Houston. Harden is almost certainly at the top of any hypothetical list of targets, and there could be smoke after Harden didn’t come to an extension with the Nets before the season, leaving him open to potential free agency in July.

On the other, Harden would have to really want to go to Philadelphia in this scenario, and Brooklyn may still be a leading contender to win the 2022 title with Harden and Kevin Durant on board. Within the same report from Pompey, he shared that the 76ers have also talked to the Detroit Pistons about Jerami Grant as a centerpiece in a potential Simmons swap, reporting that those discussions have been happening for “several months” and could continue.

Grant is potentially a more realistic target at this stage, but with due respect, he isn’t in the same stratosphere as Harden. That illustrates some of the complicated dynamics that are in play here, but it seems as if Morey isn’t totally giving up on the player that he reportedly wanted to land in a deal for Simmons even before Harden made his way to Brooklyn.