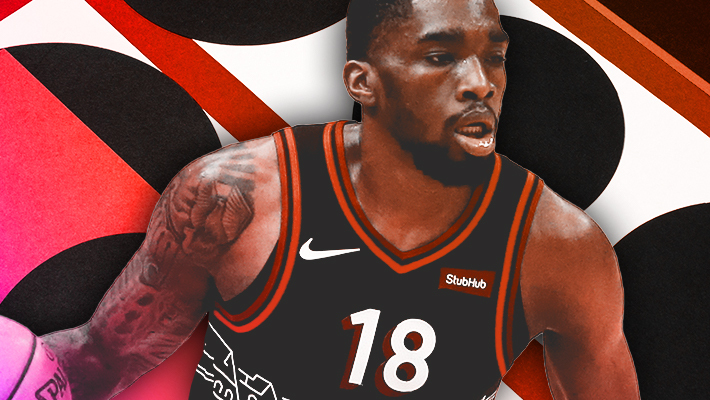 With a slight chuckle pervading through his words, Shake Milton recollects.

He’s thinking about his offseason diet, which includes daily protein shakes (his go-to is vanilla with almond butter). They make him feel full, he says, posing a challenge when the goal is to consume four hearty meals a day. But more than that, they are, in his words, “nasty things.” They’re so nasty that when Milton was in high school, he’d pour them down the sink, despite his dad’s efforts to incorporate them into his training regimen. And yet, years later, they’re helping him add muscle to wrangle with NBA opponents on both ends.

“Now, I remind myself like, man, I gotta drink these,” he says, smirking and shaking his head in frustration.

That sort of change to his diet is emblematic of how Milton has reached this point in his basketball career. The dedication to his craft has long existed — “I’ve always leaned on the work,” he says — although this isn’t a unique trait to the young combo guard. Peel back the layers of any NBA player’s origin and someone along the way is going to mention their work ethic.

For Milton, understanding how exactly to carry out that work has shifted during his NBA tenure. It’s allowed him to develop from a 22-year-old, scarcely used rookie into a critical rotation guard on the Eastern Conference-leading Philadelphia 76ers. Malleability is a pillar of his philosophy, tweaking his habits based on what he learns every year, something that gives him an edge over other athletes else who have a revered work ethic. His experiences and advice from those close to him shape how he seeks to maintain an upward trajectory.

Lifting weights became an emphasis last offseason, following Milton’s first year receiving consistent rotation minutes and experiencing the level of physicality the league offers on a night-to-night basis. For two months, the former SMU standout returned to Dallas and made it a point to spend every day in the weight room.

Learning how to play through and initiate more contact led Milton and Sixers’ staffers to emphasize those skills in drills and scrimmages over the offseason. Various coaches, ranging anywhere from 6’1 to 6’10, defended him. Milton’s objective: use his 6’5 frame and 7-foot wingspan to refine his ability to shoot and score through contact.

“Being in the playoffs that was really eye opening, like, man, these guys are physical,” says Milton, who ranks fourth on the Sixers in points (13.7) and assists (3.0) per game this year. “That was something I took away from it and headed into the offseason, like ‘OK, this is a big focus of mine that I want to improve on.’ And I feel like I did. I was definitely improved. I’m more physical out there.”

Yoga, an endeavor he occasionally performed in college, became a way to achieve greater flexibility and balance last season. Teammates such as Matisse Thybulle, Tobias Harris, and Kyle O’Quinn also practice yoga, giving him outlets to talk through different exercises. Diligent recovery — whether it be massages, treatment, or cold tub sessions — rocketed up the list of priorities after his rookie year.

Entering 2020-21 stronger, more flexible, and more adept to navigate NBA physicality, Milton has taken a step forward as a self-creator and defender. He has newfound comfort and success operating in the paint. Offensively and defensively, a sturdy blow does not tilt him off-kilter, which was more frequently the case a year ago. He is equipped to apply his frame in generating space off the dribble for jumpers or stay attached to contest shots. The waves of physicality persist, but he is well-prepared in navigating them.

“His general strength that he’s added, it’s allowed him to absorb some more contact, almost in the same way offensively, in terms of guarding bigger players,” says Tyler Lashbrook, a Sixers skill development coach. “He’s not getting, I don’t think, pushed around as easily.”

In Philadelphia’s season-opening win against the Washington Wizards on Dec. 23, head coach Doc Rivers tasked Milton with guarding Russell Westbrook and Bradley Beal for stretches, an assignment he completed about as well as a player can against such a dynamic backcourt while also posting 19 points on 6-for-11 shooting and ending the night as a member of the closing five.

“He just grew his confidence with the shooting off the dribble, his ability to get to the rim, his confidence in his own feet, his own body, defensively. I think all those areas, he’s really improved and really changed,” Lashbrook says. “The dude has put in a lot of work, like, a ton of work.”

To watch Milton conduct himself is to witness an atypical method and shooting profile. It’s an ethos partially borne through studying scoring guards such as Kobe Bryant, Lou Williams, and Jamal Crawford, all guys who he says have an ability to create space and, as Milton describes them, are “hoopers, like pure hoopers.” He burrows, sprawls, and weaves his way to spots, attempting off balance mid-range pull-ups, elongated scoop layups, and funky-foot finishes, maximizing the advantages that come with a gangly body. The strength and flexibility he’s assimilated amplify this skillset.

But on a fundamental level, Milton is the beneficiary of a tried and true NBA talking point for players as their careers progress: the game has slowed down. He’s prompt in identifying driving or shooting angles, openings that he now knows tend to close as hastily as they spring. Newfound strength has taught him the required path is not always around defenders, but can be through them. A lengthy sample of success in 2019-20 bred confidence and assertion, replacing timidity.

His NBA standing had transitioned from rotation hopeful to rotation mainstay. The mentality was no longer to simply play mistake-free basketball in a narrow role with limited chances. He was showcasing his game, uninhibited by fears of a short leash and a spot on the bench.

“I feel like I was always a player who kind of played at my own pace, and I feel like that’s something that’s kind of helped me,” Milton says. “Of course, the NBA is, it’s the best players in the world. So it’s not always gonna look pretty, it’s not always gonna look perfect, especially when you’re learning and growing. But I can definitely tell where the game is slowed down, just seeing reads and just being more confident with the rock in my hands is the main thing.”

Following a 111-97 win over the Dallas Mavericks on Feb. 25, Rivers said the coaching staff has “been really working on” Milton developing into a “better passer” in an aim to organize and steady the bench unit offensively, the next step in his evolution. Milton is “learning and managing” this role, becoming more and more comfortable with balancing scoring and facilitating.

He’s benefiting from the tutelage of assistant coach and former All-NBA guard, Sam Cassell, who imparts nuances of the position, like how to discern passing angles and pick-and-roll reads. With practices rare due to the COVID-19 pandemic, Milton is settling into expectations by adapting in-season to varying responsibilities. Taking advantage of every opportunity to learn when the ball is in his hands, no matter when they come, is paramount.

“Putting him in drills, in situations where he has to make a decision. I’m either open, I’m going to score or I’m not open, I got to make the play and what’s the read,” Lashbrook says. “For any NBA player, that takes a while, I think, to learn. Where’s the low man, is he tagging? Is the corner open? If not, is the lob open at the top of the tagging? Is a throw-back open? It takes a long time. And so putting him in those situations and live situations outside of practice, I think is is the best way to grow.”

Each of his first two years have shaped how Milton lays out his offseason itinerary. His rookie year taught him to hone in on paths to playing time, reaching a point where he could fit into a smaller role, compared to the offensive autonomy he was afforded at the G League level. His second year conveyed a drive to bulk up and handle the brawn of NBA colleagues.

Reflecting on a season still ongoing would be premature for Milton, but a defining, continued theme, wherever the specifics land, will prevail. Much like those nasty protein shakes, Milton says, “you can’t really substitute the work.”