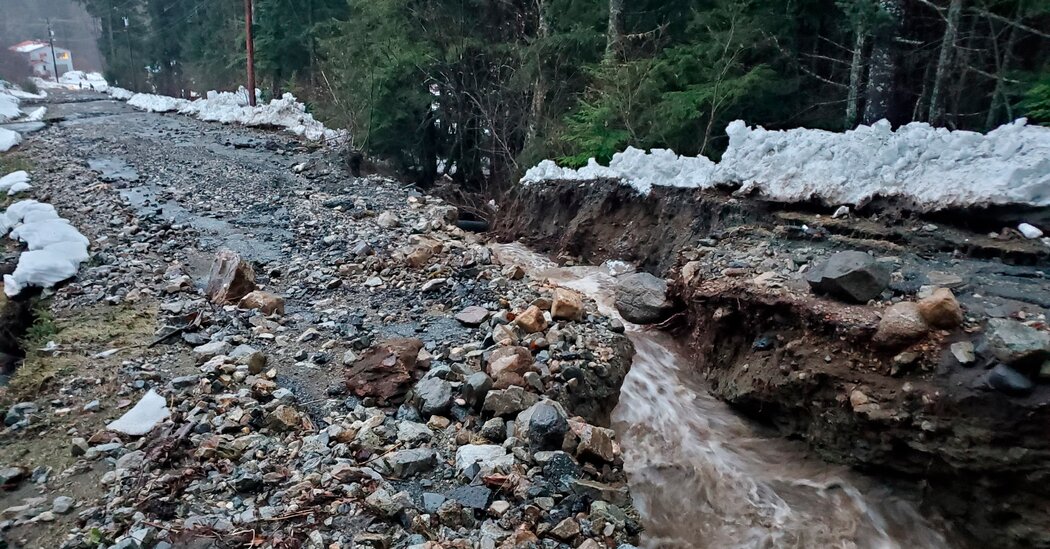 Six people were missing in Southeastern Alaska on Wednesday after heavy rains prompted landslides that buried homes under several feet of mud, according to state officials.

The landslides crushed at least four houses in Haines, Alaska, which is about 90 miles north of the state capital, Juneau, and is home to about 2,500 people, according to the Alaska Department of Public Safety.

Nine feet of mud and trees were covering one part of Haines, according to the department, which said it had suspended rescue operations on Wednesday evening because of rumbling, unstable ground.

Rescue operations were set to resume on Thursday morning, the department said, when a helicopter carrying medics, search personnel and dogs was scheduled to arrive in Haines.

Mike Dunleavy, the governor of Alaska, said the state emergency operations center was coordinating the response and that search-and-rescue teams had been mobilized.

“My emergency response team and I are monitoring the natural disaster unfolding in Haines & the broader Southeast,” Mr. Dunleavy wrote on Twitter.

He said intense flooding resulted because drainage ditches in Haines had already been plugged with about two to three feet of snow from a previous storm.

A series of small mudslides hit Haines on Tuesday and a major mudslide crushed homes on Wednesday, he said. About 30 people were evacuated by boat, he said.

Mr. Olerud said he had spoken on Wednesday to Mr. Dunleavy and other state officials about the urgent need for support.

“Everybody is in awe of the devastation and everybody is really busy helping each other,” he said on Wednesday night. “We’re praying we have a happy ending and we’re able to find everybody alive.”

The Coast Guard said it was among the agencies providing support.

A helicopter crew from Air Station Sitka was on its way to Haines, and the crews of two cutters — Liberty and Anacapa — had been told to prepare to sail to Haines to provide additional support, the Coast Guard said. A 45-foot Coast Guard boat was also on its way from Juneau.

“At this point we are aware that damage has occurred in the town of Haines following the report of multiple landslides in the borough,” Capt. Stephen White, the commander of Coast Guard Sector Juneau, said in a statement. “The scope of the damage is unknown at this time but we are proactively moving several assets and personnel to provide assistance to local first responders and the residents who may have been impacted by the landslides.”