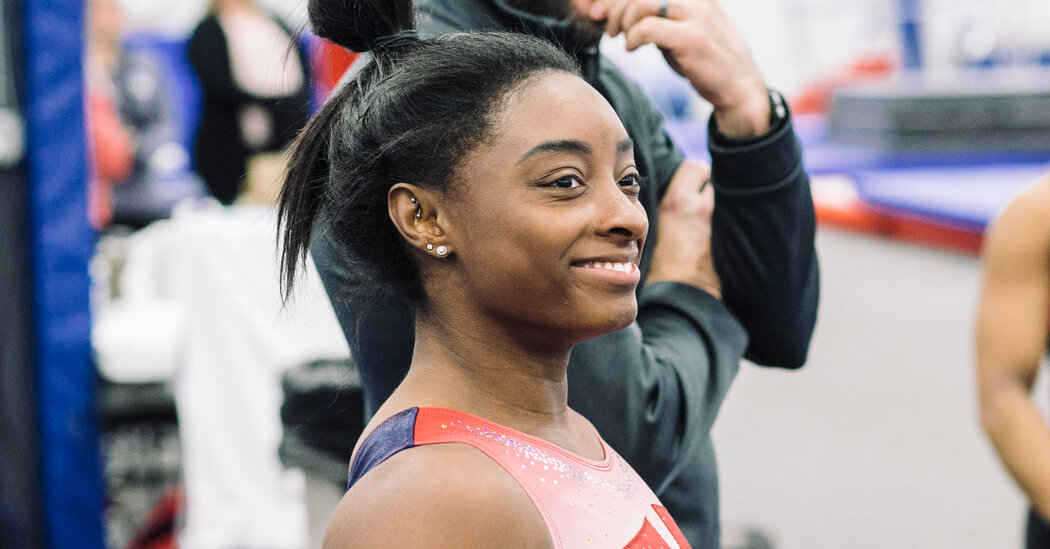 Simone Biles, the most decorated gymnast ever, has signed an agreement to represent the women’s clothing brand Athleta and is leaving Nike, her longtime sponsor, just three months before the Summer Olympics begin in Tokyo.

In interviews, Biles suggested she felt better aligned with the values of Athleta, a division of the clothing retailer Gap, than with those of Nike. “I think they stand for everything that I stand for,” she said of Athleta to The Wall Street Journal, which first reported the agreement.

Over the past several years Nike has faced a number of scandals over how it treats female employees and sponsored athletes. Women have spoken up about a toxic atmosphere at Nike’s headquarters in Beaverton, Ore., and about sponsorship contracts that penalize athletes who become pregnant. Also a Nike coach was accused of verbally abusing female runners and was suspended by the U.S. Center for SafeSport.

Biles joined a trickle of athletes who recently left Nike. This week, the estate of Kobe Bryant, the Los Angeles Lakers star who died in a helicopter crash last year, allowed his contract with the company to expire, and his widow, Vanessa Bryant, said she would pursue a new deal.

By sponsoring Biles’s Gold Over America Tour, Athleta provides financial muscle for her to more directly undercut U.S.A. Gymnastics, an organization that she has repeatedly said cannot be trusted given its failure to keep girls and women safe from Lawrence G. Nassar, the national team doctor who was convicted on multiple counts of sexually abusing athletes. A spokeswoman for U.S.A. Gymnastics, which traditionally organizes a tour after the Olympics, said the organization had no such plan for this year.

Athleta will also develop an activewear line with Biles, who will collaborate with the company’s design team. Financial terms of the agreement were not disclosed.

“It is more than just a sports apparel sponsorship,” said Mary Beth Laughton, Athleta’s president. “We really view it as a way to support Simone in her full life. As she takes on the next stage in her career in Tokyo and beyond, we really want to support that as well.”

Biles originally signed with Nike in 2015, shortly after she turned professional and won the individual all-around title at the world championships. She represented Nike at the 2016 Olympics, where she won five medals, including four golds. She is a favorite to add to her medal haul at the Tokyo Games. It is widely believed that this will be the final Olympics for Biles, 24, though she recently suggested that she might compete at the 2024 Summer Games in Paris.

“Our contract with Simone Biles has ended, and we wish her the very best,” a Nike spokesman, Josh Benedek, said in a statement.

At Athleta, Biles will join the track sprinter Allyson Felix, a fellow American who has won nine Olympic medals and who was also sponsored by Nike for several years. Felix signed with Athleta in 2019, shortly after participating in a blistering video that criticized Nike for financially penalizing athletes who became pregnant. Nike changed its policies shortly afterward.

In recent months, Nike has not renewed the contracts of several of other track and field athletes, like the long-jumper Tianna Bartoletta and the pole-vaulter Piotr Lisek, both of whom hope to compete at the Olympics this summer.

The Olympics are the single biggest marketing stage for Nike and for its competitors, like Adidas and Puma. Sports brands compete fiercely to sponsor anticipated medalists and entire governing bodies of a sport. Even without Biles and Felix, Nike’s swoosh will be omnipresent in Tokyo, where it will be represented by hundreds of athletes as well as numerous national governing bodies sending teams to the Games, including the U.S. Soccer Federation and U.S.A. Track & Field.

The gymnasts competing for the United States at the Olympics will wear uniforms made by GK Elite.

Marketing at the Olympics is important for sports brands not because of direct sales of gear, but because of the halo effect the event creates around the brand.

Nike and other companies want to tell potential customers a story about elite athletic performance and product innovation — a narrative that becomes easier to sell (and possibly to believe) when hundreds of athletes wear its shoes and apparel while winning gold.

Athleta, whose only sponsored athletes are Felix and Biles, sells more general activewear rather than sport-specific clothing, and its brand is focused on inclusivity, women’s empowerment and sustainability. In taking athlete endorsers away from Nike, Athleta has joined other niche sports apparel brands like Oiselle, whose best-known endorser is Kara Goucher, a long-distance runner who was sponsored by Nike and has become a strong critic of the company.

“We definitely do admire the courage of Simone and Allyson, and all of the young women and athletes who have spoken up and used their voices,” said Laughton, the Athleta president.

While Biles’s move implicitly criticizes Nike, her tour is explicitly taking aim at U.S.A. Gymnastics. Biles, one of more than 300 athletes who have said that Nassar molested them, has repeatedly criticized U.S.A. Gymnastics and the United States Olympic Committee as seeming to be more interested in avoiding responsibility for Nassar’s abuse than in finding the truth.

Now Biles, with the help of Athleta, is challenging what was once a major source of revenue for U.S.A. Gymnastics.

Biles’s Gold Over America Tour, which was planned before she signed the deal with Athleta, will visit 35 cities across the United States in the fall after the Olympics. The biggest stars to sign on with Biles so far are Laurie Hernandez, who won a team gold alongside Biles at the 2016 Olympics, and Katelyn Ohashi, a former U.C.L.A. gymnast whose college routines frequently yielded viral videos.

Though U.S.A. Gymnastics does not report specific revenue from its traditional post-Olympic tour, the organization’s annual financial statements suggest that the series has been a big moneymaker.

U.S.A. Gymnastics filed for bankruptcy protection in 2018, after more than 100 lawsuits were filed by survivors of Nassar’s abuse, and it is still working through the reorganization process.

“While U.S.A. Gymnastics has no plans for a post-Olympic tour in 2021, we are thrilled that the Gold Over America Tour will allow fans around the country to connect with our sport and the incredible athletes who will be taking part,” Meredith Yeoman, a spokeswoman for U.S.A. Gymnastics, said in an email.