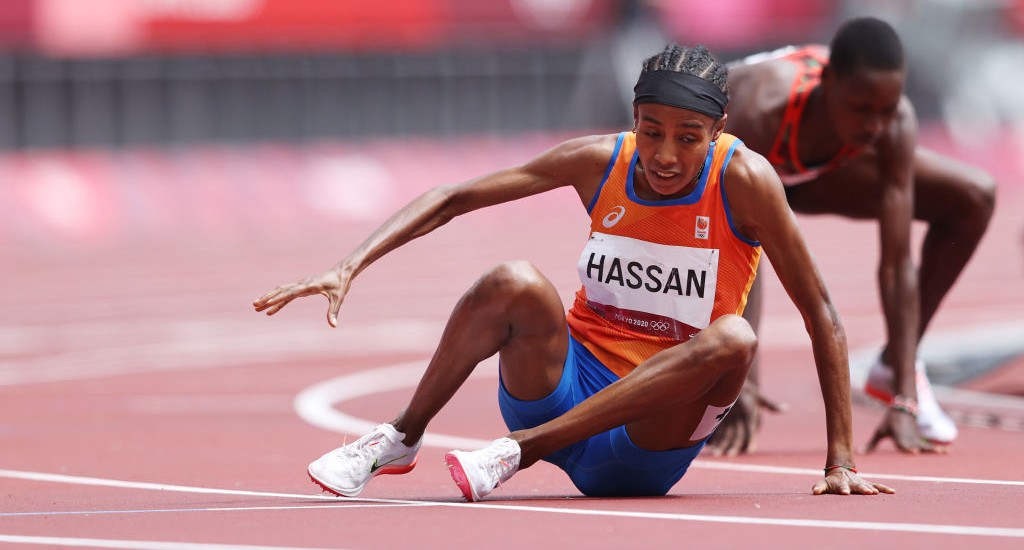 The Olympics often produce some truly incredible individual feats of strength and athleticism, but they can also create heartbreaking moments of despair. We got both of those in one unbelievable lap in the first heats of the women’s 1500 meter run in Tokyo on Sunday evening (Monday morning in Tokyo) when Sifan Hassan of the Netherlands did something truly astonishing.

Hassan, who it should be noted is doing something truly insane in trying to run the 1500, 5000, and 10000 meter races at these Olympics, is among the favorites in the 1500 and, with a 5000 meter race later that night, her goal in the opening heat was, simply, to coast in the back before springing into action to get into the top 6 to automatically qualify for the semifinals. The first three laps went according to plan, but just as they crossed the finish line to begin the bell lap, a chain reaction of collisions in front of Hassan led to her getting tripped up and falling to the track.

For most, this would be a death knell with just 400 meters to go, but Hass an got up and started mowing down the field, one by one, like a dang Terminator, eventually catching the lead pack and winning

Sifan Hassan of the Netherlands tripped with one lap to go in a preliminary heat of the women’s 1500m but got back up to continue the race.

She ended up winning her heat to advance. #TokyoOlympics pic.twitter.com/gU536XvyHg

It is an incredible effort and one of the most amazing things we will see from a runner in these Games. Afterwards, Hassan understandably went right by all the media in order to get to rest and recovery as fast as possible because she has another 3-plus miles to run later on Monday night, but you could see the frustration in her face as she went to the track, knowing that she now had to expend a lot more energy than planned just to make the semis. Still, to be able to get up and make it happen is spectacular and hopefully that move didn’t sap too much of her stamina for her many other long races to come.