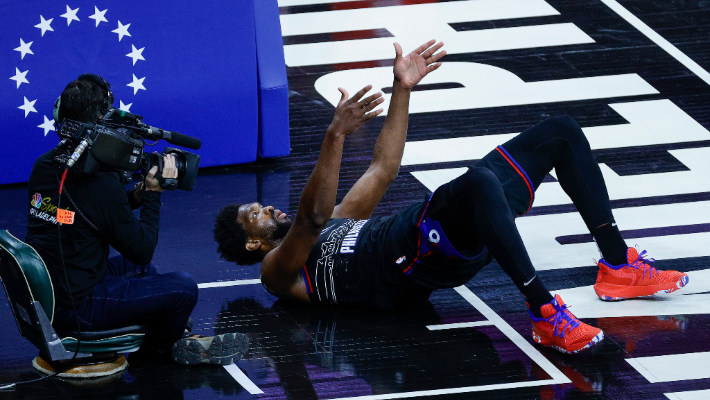 Joel Embiid is essentially a wrestling heel. The Philadelphia 76ers’ star is an entertainer at heart, and seems to relish in both drawing heat from opposing crowds and getting tons of love from his fans. This is why it’s probably not a huge surprise that Embiid tapped into his ability to ham it up during the Sixers’ 120-95 win over the Washington Wizards a little earlier this week.

Specifically, Embiid paid homage to Triple H and Shawn Michaels’ legendary stable D-Generation X by busting out a crotch chop while he laid on the ground.

Embiid says the move is an homage to his favorite wrestlers and members of DX, Shawn Michaels and Triple H https://t.co/MXi9XZ8Ikh

Joel Embiid on his Thrust The Process celly

“It’s fun. I missed the fans. They make us play harder”

It was very funny, which is usually the case when someone does the DX like this. One day later, Embiid further paid homage to DX by taking the famous way they’d end promos and adding a powerfully Joel Embiid twist to the entire thing.

Pretty good, eh? As it turns out, the two leaders of DX decided to get in on the fun, too, with both the Cerebral Assassin and the Heartbreak Kid giving Embiid a quote tweet and letting them know they’re behind him right now.

The whole thing got Sixers/WWE crossover fans really fired up.

What this all tells me is that we desperately need a Blazers-Sixers Finals so Embiid can do DX things while Damian Lillard can dress up like Stone Cold Steve Austin again.