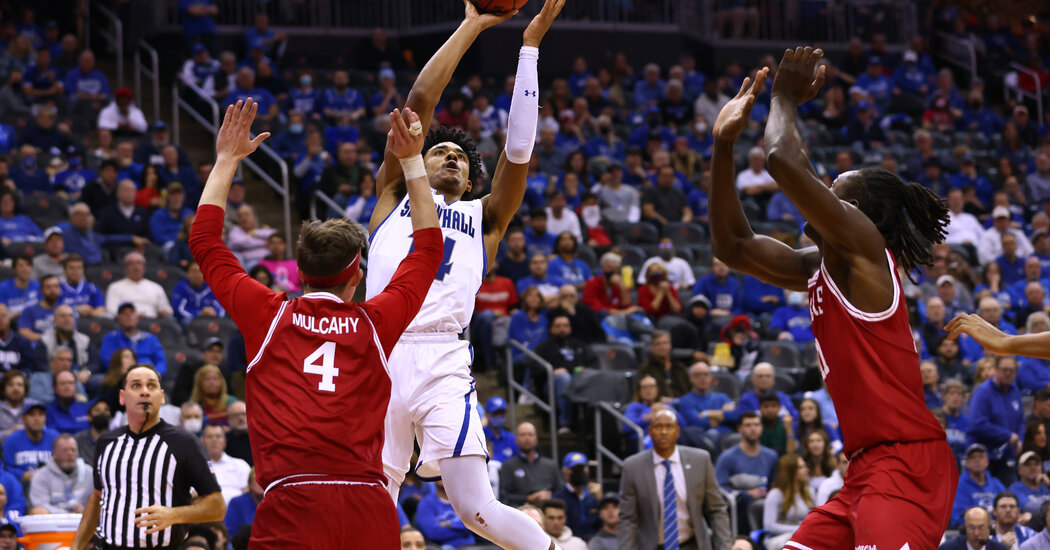 NEWARK — Sunday night was — and this really isn’t said often enough — a great time to be alive in the Garden State. Here it was, the 106th anniversary of Frank Sinatra’s birth in Hoboken, and an energetic, raucous crowd that included a handful of elite recruits overflowed Prudential Center’s lower bowl to see a men’s college basketball matchup with some verifiable juice: Seton Hall hosting Rutgers.

It is hard to recall the last time New Jersey’s flagship basketball schools — one of which views itself as a football school — were fighting each other for supremacy rather than relevance.

But then Thursday happened. Moments after Seton Hall vanquished seventh-ranked Texas — the Pirates’ second win over a top-10 team this season — Rutgers did them several turns better, shocking No. 1 Purdue on Ron Harper Jr.’s buzzer-beating heave from just inside the half-court line.

The court swelled with fans, including Todd Frazier, the former Yankees and Mets third baseman and a Rutgers alumnus, who in the bedlam had to turn back to retrieve his young son. The victory raised the possibility that the Scarlet Knights might shake out of an early-season funk and find the form required to make a second consecutive appearance in the N.C.A.A. tournament, which they have not done since the mid-70s.

But Seton Hall had a little too much for Rutgers on Sunday night — too much depth, rebounding and second-half shotmaking by Bryce Aiken and Jared Rhoden — and fended off the Scarlet Knights for a 77-63 victory.

Rutgers, which dropped to 5-5, had sliced a 16-point deficit to 6 with just over six minutes left. But Aiken — a graduate transfer from Harvard who missed most of last season with the Pirates because of injuries — delivered down the stretch for Seton Hall, which improved to 9-1 and jumped from 23rd to 16th in the Associated Press Top 25 poll on Monday.

Late in the game, with the outcome no longer in doubt and play stopped, Rhoden walked toward the band, which had exhausted its Bon Jovi playlist, and the student section, which extended into the usually closed-off upper deck, and waved his arms over his head, urging the fans to get louder.

They responded with music to his ears, chanting “We Own Jersey.”

Afterward, Seton Hall took back possession of the game’s trophy — a 33-pound memento in the shape of New Jersey made from reclaimed Asbury Park boardwalk planks (which presumably have been scrubbed of sea gull guano and ice cream drippings).

Rhoden, a 6-foot-6 senior forward from Long Island, said the win was particularly meaningful to him. The teams did not play last year when their schedules were upended because of the pandemic, and the series — which has continued on a rotating home-and-home basis since Rutgers left the Big East Conference after the 2012-13 season — had been in doubt until Rutgers Coach Steve Pikiell agreed to play this year’s game on the road.

That left Rhoden to stew for another 12 months over the last time the teams met: a 68-48 thrashing by Rutgers at the boisterous, since-rebranded Rutgers Athletic Center.

Rhoden keeps a photo on his phone from that night: He’s laying on the floor after having dived for a loose ball in front of the opposing bench and a Rutgers reserve is yelling at him. “That was something that resonated with me forever,” said Rhoden, who had 16 points and 9 rebounds on Sunday. “Every time I think of Rutgers, I think of that moment. I knew I was going to come out here tonight and try to be a dog as much as I could.”

In fact, Rhoden was so amped up that Coach Kevin Willard took him out after only a little more than two minutes — and two missed shots — to settle him down.

Among those who appreciated that tenacity was Jerry Walker, who starred at St. Anthony, the since-shuttered Jersey City high school powerhouse, before coming to Seton Hall. He helped the Pirates reach the N.C.A.A. West Regional final in 1991 — the last year Seton Hall and Rutgers both reached the tournament.

He took part in a lunch on Friday with some former standouts at both schools, an event the organizers would like to build on to promote the game.

“This is one of these underrated rivalries,” said Walker, who runs a nonprofit for after-school programs and is a Hudson County commissioner. “It’s like Ohio State and Michigan in football. That’s a big statement, I know.”

Hyperbole aside, as college basketball returns to something resembling normal this season, there has been more ruminating among coaches and administrators about not leaning so heavily into neutral-site games and playing more marquee games on campuses. On Saturday, for example, there were several intriguing matchups featuring ranked teams that were enhanced by partisan crowds: U.C.L.A. at Marquette; Missouri at Kansas; Houston at Alabama; Arizona at Illinois; Kentucky at Notre Dame; and Arkansas at Oklahoma. Sunday provided another when Villanova played at Baylor, which moved to No. 1 on Monday.

“The environment is what’s special about college basketball,” Pikiell said. Of the rivalry with Seton Hall, he added: “It’s obviously a great game for New Jersey, I don’t care who the coach is. I said this many times: We should always play this game.”

He thanked Willard for playing the game, which was a diplomatic way of reminding everyone that Seton Hall, instead of working to reschedule the game last year after it was canceled because of the pandemic, had instead picked up a game with Penn State. And Sunday’s game, the fifth consecutive sellout in the series, wasn’t finalized until June, when Rutgers agreed to play in Newark.

Neither Sunday’s win nor having some A-list recruits — including Naas Cunningham, a 6-foot-7 wing who has visited Rutgers and is considered among the top players in the class of 2024 — sitting behind the Seton Hall bench seemed to salve Willard’s reluctance.

“I hate this game,” he said with a laugh, adding that at least he has to play Rutgers only once now that it’s in the Big Ten. “It’s a no-win situation.”

“I know it’s important to the fans,” he added. “It’s just never been that big. I’m not from New Jersey. When you’re a coach, every game is a big game — seeding, making the tournament.”