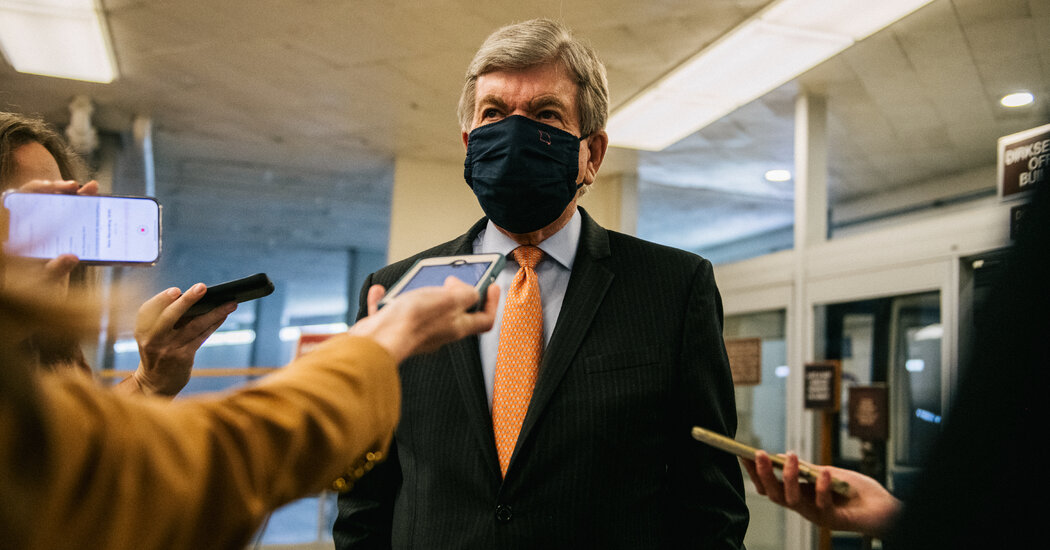 Senator Roy Blunt of Missouri, a fixture of the Republican establishment in Congress, announced Monday that he would not seek re-election in 2022, delivering a major blow to party leaders and opening the way for another conservative candidate more closely aligned with former President Donald J. Trump.

Mr. Blunt, the fourth-ranking Senate Republican, told reporters in January that he was planning to run for a third term, and many Republicans had assumed he was positioning himself to do so, as he worked to avoid alienating Mr. Trump.

But on Monday, Mr. Blunt said after nearly 12,000 votes in Congress, including a stint as House Republican whip, he had decided to call it quits.

“After 14 general election victories — three to county office, seven to the United States House of Representatives, and four statewide elections — I won’t be a candidate for re-election to the United States Senate next year,” Mr. Blunt said in a video posted on social media on Monday morning. Speaking outside of his family’s dairy barn, Mr. Blunt said he had always been interested in the “practical sense of getting the job done” but did not expound on his decision.

The departure of Mr. Blunt, 71, will accelerate a brain drain already underway among Senate Republicans and will likely shift the character of the body. A bipartisan deal-maker and fixture of Washington social circles, he was the rare member of Congress to serve in high-ranking posts in both House and Senate leadership. He was also in charge of planning President Biden’s inauguration in January, a delicate task that required him to navigate explosive political crosscurrents and the threat of violence after the Jan. 6 mob attack on the Capitol.

His decision not to seek another term follows similar ones by Senator Rob Portman of Ohio, one of Republicans’ leading policy minds and a key moderate; Senator Richard Shelby of Alabama, a deal-making former chairman of the Appropriations Committee; and Senator Patrick J. Toomey of Pennsylvania, a top party voice on free-market economic matters.

In their place has emerged a crop of Trump acolytes who have mirrored the former president’s combative style and shunned bipartisan compromise.

Missouri, a one-time swing state, has shifted rightward in recent decades, meaning the seat will most likely stay in Republican hands. Mr. Blunt had not formally drawn a primary challenger, but his close alliance with Senator Mitch McConnell of Kentucky, the minority leader, and his status as a consummate Washington insider put him at risk for a bitter intraparty fight to hold his seat.

Eric Greitens, the state’s former Republican governor who resigned in a cloud of scandal in 2018, said last week that he was “evaluating” whether to challenge Mr. Blunt in a primary, telling a St. Louis radio station that he was “certainly going to keep the door open” to a campaign. Mr. Greitens, a decorated Navy SEAL, has sought to position himself as a true heir to Mr. Trump’s political style and accused Mr. Blunt of inadequately backing him.

“It’s not enough to have an ‘R’ behind their name, we have to have people who are willing to take on the establishment to actually fight against the swamp,” Mr. Greitens said. He attacked Mr. Blunt for “siding with Mitch McConnell,” for criticizing Mr. Trump’s conduct around the Jan. 6 assault on the Capitol, and for attending Mr. Biden’s inauguration.

Democrats, who have lost nearly every race for statewide office over the last decade, have no clear front-runner. Scott Sifton, a veteran of the Missouri statehouse, had already jumped into the race. Democrats in the state have suggested Chris Koster, a moderate Democrat who lost to Mr. Greitens in the 2016 race for governor, could run.

Jason Kander, who narrowly lost to Mr. Blunt in 2016, and former Senator Claire McCaskill, who lost her re-election bid in 2018, both said on Monday that they would not run.