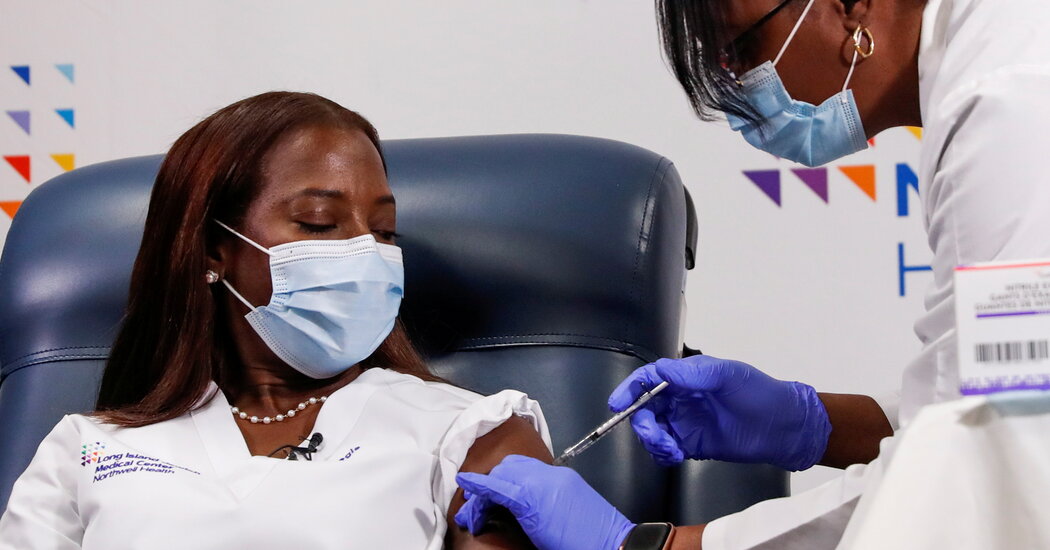 After Sandra Lindsay became the first person in the United States to receive a Covid-19 vaccination outside a clinical trial, something unexpected happened: She acquired a fan club.

Half a dozen inspired youngsters in Lee, N.H., ranging in age from 8 to 12, each sent Ms. Lindsay a letter praising her for leading the way.

“I would like to thank you for taking the first vaccine in the U.S.A.,” 12-year-old Finley wrote. “I have had a hard time in this era. What you did was incredibly brave.” He added, “You helped everyone who was unsure, and you gave hope to those who are lonely and felt unsafe.”

On Monday, Ms. Lindsay, 52, the director of critical care nursing at Long Island Jewish Medical Center in Queens, was in the vanguard again. The requisite 21 days had passed, so it was time for her, and hundreds of other health care workers and long-term care patients at the head of the line, to receive the second half of the two-dose Pfizer-BioNTech vaccine.

By the end of the day, 118,304 people in the city had gotten a first dose of coronavirus vaccinations, and 756 had gotten a second, according to the New York City Department of Health and Mental Hygiene. Across the country, other early recipients were getting shot No. 2 as well.

Nearly all states have made getting health care workers and nursing home residents immunized a top priority. But the effort, now three weeks old, has been slower than many governors and public health officials hoped.

The federal government has shipped more than 15 million vaccine doses to states, but only 4.5 million people have received them so far. There are 21 million health care workers nationwide, and three million residents of nursing homes and other long-term care facilities.

Dr. Mark P. Jarrett, chief quality officer for Northwell Health, which operates Long Island Jewish, 22 other hospitals and 800 ambulatory care sites in the New York metropolitan area, said his organization has vaccinated about 27,000 employees with either the Pfizer or the Moderna vaccines. The Moderna recipients will get their second shot after 28 days.

The two-stage nature of the vaccines will affect how fast the vaccination program progresses, Dr. Jarrett noted. “I would expect that general public inoculations could start in late February, and it will take a long time to complete,” he said. “You’re talking about millions of people, and they have to come back for second shots.”

Ms. Lindsay said on Tuesday that she had experienced no side effects from the vaccine, and that she was touched by the children’s letters, which left her “very, very emotional.”

She said she had been sure since the early days of the pandemic that she would get vaccinated as soon as she could: “Given my experiences on the front lines, and seeing the hard work of my colleagues and the suffering and death of patients, I knew back then that when it was developed, I wanted to take the vaccine.”

But even with the two shots now safely in her arm, she still worries about going to work.

“I have been a nurse for more than 26 years, and I’ve never been more scared than I am right now, even with the vaccine, because this virus is so erratic, unpredictable and does not discriminate,” she said. “You never know what you are walking into.”