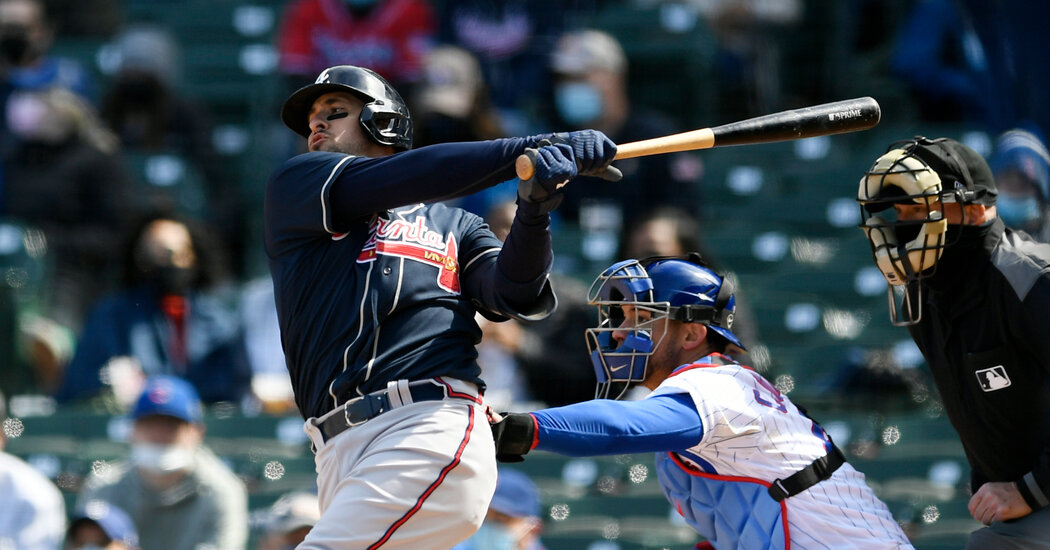 During the Atlanta Braves’ 13-4 loss to the Chicago Cubs at Wrigley Field on Saturday, infielder Sean Kazmar Jr. entered the game in the fifth inning as a pinch-hitter, saw four pitches and grounded into a double play. The three-minute appearance may not seem like much, but it meant the world to Kazmar and his family. It was Kazmar’s first major league game since Sept. 23, 2008 — a span of 4,589 days.

“Definitely everything and then some,” said a beaming Kazmar after the game. “What an amazing feeling.”

Kazmar’s story is one of relentlessness and optimism, and, as Braves Manager Brian Snitker said, perhaps befitting of a movie or book. Kazmar first accomplished his dream, at 24, in 2008, getting called up by the Padres to serve as a fill-in for the injured shortstop Khalil Greene. He played in 19 games, starting in 11, and hitting .205.

Like any professional baseball player, Kazmar hoped to stay there. But instead, in 2009, he was back in the minors, where the travel and pay are a far cry from the charter planes and millionaires of the big leagues. He spent two seasons with the Padres’ Class AAA team. He was with the Seattle Mariners’ AAA team in 2011, was in the Mets’ system and joined Atlanta’s AAA team in Gwinnett in 2013.

In all, Kazmar played 1,106 minor league games between his major league appearances. Throughout that time, he heard comparisons to Crash Davis, the player who served as inspiration for the main character in the movie “Bull Durham.” But even as Kazmar was stuck in the minors, he said that month and a half in the majors were the greatest days of his life and part of why he was still going into his 30s.

“There could have been obvious times where I doubted that this opportunity would ever come,” he said on Saturday. “But honestly, it never really left my mind and especially the last few years, I still felt like I had the ability to play at this level.”

In 2019, after re-signing a minor league deal with Atlanta, Kazmar, at 34, had one of his best seasons, hitting .270 with 12 home runs and 61 runs batted in while playing all around the infield.

Then the coronavirus pandemic struck in 2020. Kazmar said he couldn’t look for a job outside baseball because he was unsure whether he would end up on an expanded major league roster, so he began receiving unemployment insurance like so many minor league players. (The minor league season was canceled.) Instead of playing, Kazmar was with his wife and two young boys at their home in Arizona — time he wouldn’t have otherwise had while chasing his dream.

“I know it drove him nuts last year not being in the holy ground, and he probably was the M.V.P. of spring training for like the third year in a row,” said Snitker, who managed Kazmar for several years in AAA.

But when Atlanta suffered a series of injuries on Friday — second baseman Ozzie Albies was hit in the leg by a pitch and outfielder Ender Inciarte exited with a hamstring strain — Kazmar finally had a path back to the major leagues. Kazmar, who was on Atlanta’s pandemic reserve roster, said he was at his hotel room watching the Braves play and he received a phone call a few hours after the game.

“That was probably one of the greatest moments I’ve had as a manager at all the levels, quite honestly,” Snitker said.

When Snitker was promoted from the Braves’ AAA team to be their major league manager during the 2016 season, he said that one of the greatest things that could happen to him was to have Kazmar alongside him. Although Snitker said he wasn’t sure how long Kazmar would be needed on the big-league club, he was thrilled that their goal came true on Saturday.

The last player with a longer gap between major league games, according to the Elias Sports Bureau, was Ralph Winegarner, who went 13 years 14 days between pitching appearances for Cleveland in 1936 and the St. Louis Browns in 1949.

“It was worth the wait, for sure, to get back and get in there to get another,” Kazmar said of his lone at-bat on Saturday.

Although Kazmar said it felt like time had flown by, he was fuzzy on some of his own history. Asked on Saturday if he remembered the previous time he played in the majors, Kazmar confused it for the preceding game. “That’s how long it’s been,” he conceded with a laugh.

Only one other player from Kazmar’s previous big-league appearance is still in the majors: Wade LeBlanc, 36, who started for the Padres that day and is now a member of the Baltimore Orioles’ bullpen. The starters for the opposing Los Angeles Dodgers that day included Manny Ramirez and Nomar Garciaparra.

“You go from ’08 to ’21 in between, you got to be kidding me,” Snitker said of Kazmar. “To have the perseverance and the dedication and the drive — and he’s getting better as a player.”

Although playing minor league baseball wasn’t particularly lucrative or stable, Kazmar said he was also driven because he had loved baseball since he was 4. He was born a Braves fan in Valdosta, Ga. It was the first jersey he said he ever wore, so donning it in a major league game was particularly special to him.

Kazmar said his wife and his mother dropped everything to get on a red-eye flight on Friday night to make it to Chicago in time to watch his lone at-bat. And during the game, Kazmar said he was nervous and emotional.

“Obviously I wasn’t, when I first started this career, trying to play in Triple-A my whole career,” he said. “That’s just kind of how it ended up. But at the same time, I’d do it all over again for a day like today.”