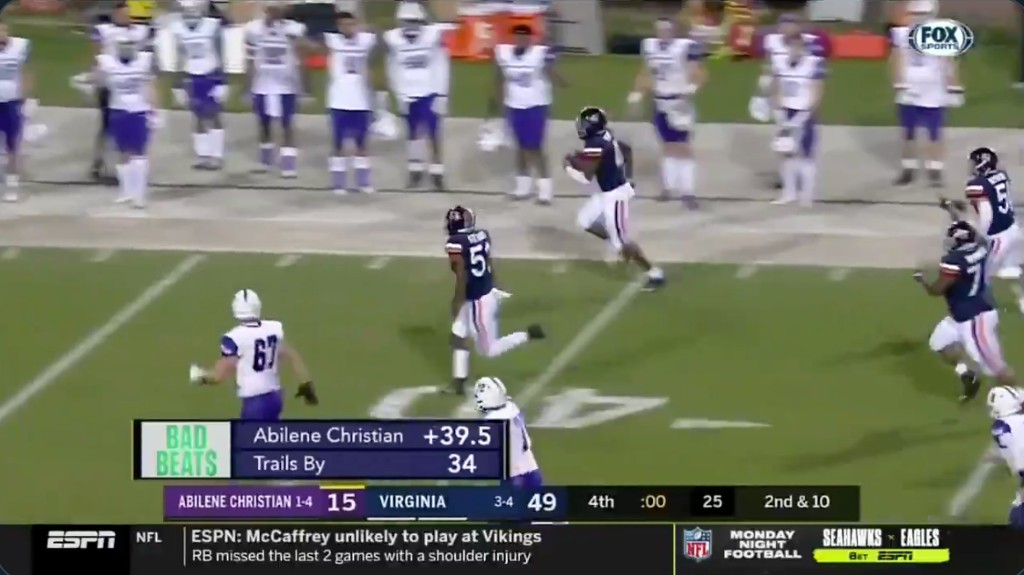 When Scott Van Pelt was given his own midnight edition of SportsCenter he retooled the format to bring new segments, including embracing gambling content that had been taboo on television but that longtime listeners of his radio show had come to expect from him. There is Winners, his weekly college football picks segment complete with a Trombone Shorty intro, but the one that has become a phenomenon is Bad Beats.

Every Monday night, SVP and Stanford Steve deliver the absolute worst in backdoor covers and totals getting busted that saw money flip at sportsbooks. It is, for my money, the best segment on sports television right now and it’s not particularly close, as it’s appointment viewing every time just to see if one of your own bets made the list or to find some obscure beats you never would’ve otherwise known about.

This Monday brought an all-timer from a game few likely even were aware happened on Saturday, as Abilene Christian was a 39.5 point underdog at Virginia. After cutting the lead to 36 with a touchdown inside two minutes to play, Abilene was covering. What transpired from there is truly awe inspiring and produced one of the finest calls I dare say in SportsCenter

The absurd joy they take in watching that awful double pass play from Virginia to make it a 34-point game is delightful, as they giggle to each other about what the hell the plan was. But nothing tops the final play pick-six as Steve screams “67, GET ON YOUR HORSE” and SVP retorts “the horse is on him!” For anyone who bet on Abilene Christian, one, salute for being a real degenerate, and two, my goodness I’m so sorry, but I hope you at least got some joy from this recounting of your horrific bad beat.

P.S. Dear Emmys, give them all of the awards.