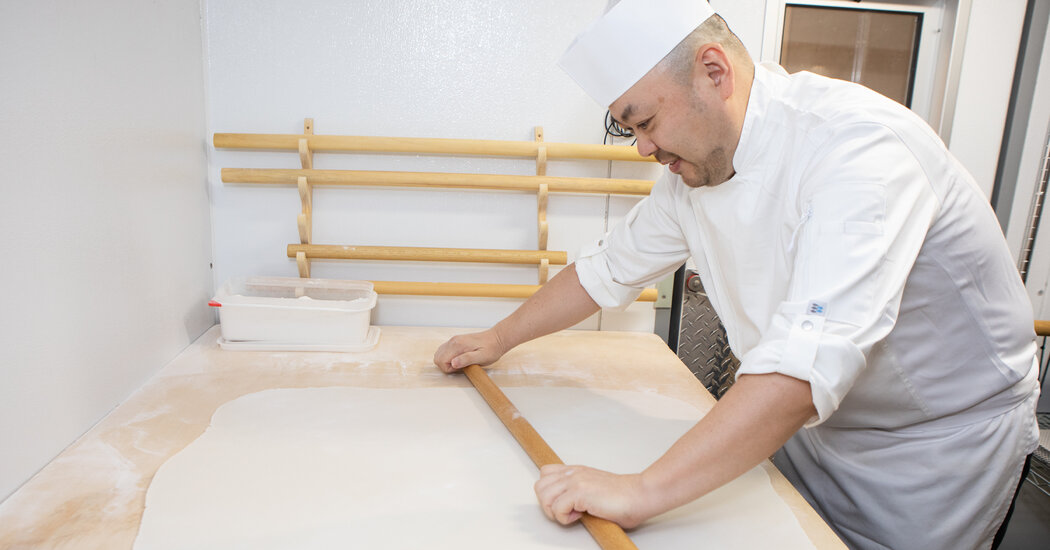 The history of this restaurant, which specializes in soba noodles, goes back to 1789 when it started serving its noodles to aristocrats and the imperial families in Japan. Using the heart of the buckwheat seeds, its soba is white, making it more delicate and refined. Yoshinori Horii, who runs the company, decided that New York would be its first overseas branch, but the pandemic stalled the opening. In the warmly decorated New York restaurant, the chef Tsuyoshi Hori (the name is a coincidence) and his staff make the soba that they use. They also make more traditional buckwheat soba using some wheat flour, and diners can select which type of soba they prefer. There are more than a dozen soba dishes, cold and hot, many served with tempura and involving seafood, meats like duck, and vegetables. Several sauce options are also available. In addition, the restaurant offers appetizers like deep fried tofu, grilled eel with eggplant, crab cake, fish carpaccio and a soba roll. Salads, tempura dishes, black cod with miso, sukiyaki, and stone-grilled duck with vegetables are some non-soba items. (Opens Wednesday)

Dario Cecchini, an eighth-generation Tuscan butcher, has opened a deli in New York as part of Sam Nazarian’s C3 collection of restaurants. (Mr. Cecchini’s family shop, in Panzano in Chianti, has become world famous thanks in part to his showmanship, as seen in his episode of “Chef’s Table” on Netflix.) Don’t expect slabs of bistecca alla fiorentina here; the shop and restaurant in the Brookfield Place complex at Battery Park City, sells and serves sliced meats like mortadella, salami, ’nduja, finocchiona and roast beef layered in hot and cold sandwiches with cheeses, vegetables and other items. It has been installed on the ground floor next to P.J. Clarke’s on the Hudson, in what is essentially a testing area for different concepts developed and owned by C3. The tryout will last six months, then another C3 brand will move in. A more permanent Cicci di Carne will be going into the C3 food hall at Brookfield’s Manhattan West in September. There are 20 more of them planned around the country.

It was almost two years to the day since Gabriel Aiello closed his long-running restaurant and bar near Columbus Circle because the building was being demolished. His new location opened early this month, and the Northern Italian menu, somewhat abridged for the opening weeks, hews closely to the original. The restaurant was designed by the Rockwell Group, which gave it a somewhat more formal look, with pale walls, handsome lighting, a marble bar up front and plush semicircular booths instead of the previous big, open trattoria-style room. Mr. Aiello said that the seating had increased by about 30 percent and that there were outdoor tables. What has barely changed is the staff. “I’m proud that almost all of them have come back,” he said.