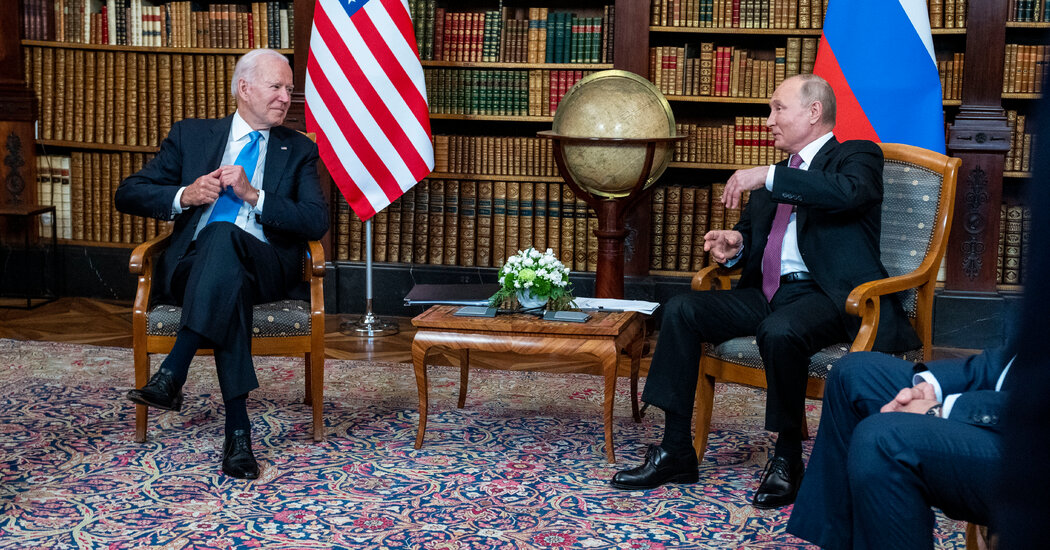 GENEVA — For months, Russia’s state news media have ridiculed President Biden as bumbling, confused and well past his prime. But by Thursday, the mood had shifted: Here was a man in the White House, some said, who understands us, whom we can do business with.

On one point there seemed to be broad agreement: Mr. Biden was a new sort of counterpart, more predictable and professional than President Donald J. Trump and more inclined to reckon with Russian interests than other recent predecessors, like President Barack Obama.

“The earlier doctrine, put forward by President Obama, which dismissed Russia as just a regional power, has been rejected,” said Konstantin Remchukov, editor of the influential Nezavisimaya Gazeta newspaper, appearing on state-run Channel One.

It has been revealed, Mr. Remchukov said, that Russia is an indispensable power that the U.S. “needs to talk with” and that Mr. Putin is “no longer demonized” as a pariah.

Mr. Biden’s description of Mr. Putin before Wednesday’s meeting as a “worthy adversary” raised eyebrows in Moscow. And in his opening remarks at the meeting, in an 18th-century villa overlooking Lake Geneva, he pointedly departed from Mr. Obama’s “regional power” remark, saying that Russia and the United States were “two great powers.”

“He is the first post-Cold-War U.S. president who has adequate notions of what Russia is and what it wants, and what the United States can and cannot do about it,” said Kadri Liik, a Russia specialist at the European Council on Foreign Relations in Berlin. “Biden has been positioning himself very skillfully.”

Meeting by video link with university graduates in Moscow on Thursday, Mr. Putin himself defended Mr. Biden against portrayals of him as being out of his depth.

“I want to say that the image of President Biden that our and even the American press paints has nothing to do with reality,” Mr. Putin said. “He’s a professional, and you have to be very careful in working with him to make sure you don’t miss anything. He doesn’t miss anything, I can assure you.”

The relationship between Russia and the United States is plumbing such depths, analysts said, that it was impossible to imagine a real alleviation of tensions any time soon. And Mr. Putin — in denying any responsibility for cyberattacks and rejecting any criticism of the Kremlin’s repression of dissent at home — made it clear he was not about to change any policies.

But there was hope that the relationship’s downward spiral, which many fear could at some point swerve toward military confrontation, could at least be halted if Moscow and Washington re-engaged in talks. Russian analysts and officials who have long been fiercely critical of the United States for, they say, seeking to weaken Russia, said they saw in Mr. Biden a recognition that he had to contend with Russian interests.

“The leaders’ meeting fully justified the most optimistic expectations and delivered the most results of any in the last decades of the relationship between the powers,” Timofey Bordachev, a prominent commentator, wrote in a Kremlin-friendly online outlet, Vzglyad. “Biden, believe it or not, looks to be the first American president in 30 years who is playing a ‘long game.’”

The praise of Mr. Biden from the pro-Kremlin commentariat was significant because the Russian elite has long seen Democrats as part of a “Russophobic” American establishment for which democracy and human rights are simply code words to justify attacks on Mr. Putin. But in Mr. Biden, some Russians see an experienced leader focused clearly on his priorities — such as domestic affairs and competition with China — for whom confrontation with Russia is not an end in itself.

And after the dashed hopes of the Trump era — when an outspoken fan of Mr. Putin in the White House never made good on his promises of friendlier relations — Moscow is particularly attuned to Mr. Biden’s apparent proficiency in managing the apparatus of government.

“It should be acknowledged that the presidency of Joseph Biden has brought about stabilization,” Fyodor Lukyanov, a foreign-policy analyst who advises the Kremlin, wrote in the newspaper Kommersant. “Both because of his personality and because he clearly knows what he wants.”

The Kremlin’s spokesman, Dmitri S. Peskov, took to a liberal radio station, Echo of Moscow, Thursday morning to spin the meeting’s outcome. He lauded Mr. Putin and Mr. Biden for, among other things, agreeing to disagree. On issues like antigovernment protests in Belarus and the imprisonment of the opposition leader Aleksei A. Navalny, Mr. Peskov said, the two presidents exchanged views and quickly moved on.

“The leaders had the chance to present their positions directly, to more or less understand where cooperation is possible and where it is not for the time being, given a categorical divergence in views,” Mr. Peskov said. “That’s also a positive.”

Russia’s adversaries in Eastern Europe watched the Geneva encounter with apprehension, and Ukrainian officials said before the meeting that they would reject any agreements about Ukraine made by Mr. Putin and Mr. Biden without their participation. Both presidents suggested in their news conferences that Ukraine played a minor role in their discussions, provoking some gloating among pro-Kremlin analysts.

Vladimir Solovyov, the host of a loudly pro-Putin evening show on the Rossiya-1 state TV channel, used his time Wednesday night to claim that the meeting demonstrated that President Volodymyr Zelensky of Ukraine had been left alone by his Western backers. He showed a photo collage of Mr. Zelensky taking a selfie in front of Mr. Biden and Mr. Putin in Geneva, and said the Ukrainian president was behaving like “a touchy little child.”

In Kyiv, the Ukrainian capital, Alyona Getmanchuk, director of the New Europe Center research institute, said she worried that Mr. Putin’s stated willingness to engage in new talks would be nothing but a ploy to gain advantage in his continued confrontation with the West.

“Even if there would be some new ideas or new proposals from Putin’s side which could sound constructive,” Ms. Getmanchuk said, “it will be an attempt to create new traps for the U.S. or for Western partners.”

But Ms. Liik, the European Council on Foreign Relations analyst, said reduced tensions between Russia and the United States could also be helpful to opponents of Mr. Putin — both for the opposition inside Russia and to countries like Ukraine that have an adversarial relationship with the Kremlin. The reason, she said, is that Mr. Putin is likely to act in a more restrained manner if he is engaged in high-level negotiations with the United States.

“I think it is good for everyone if Russia has things to lose in its relationship with the United States,” Ms. Liik said. “With Trump, we were in a situation for a while where it had nothing to lose.”