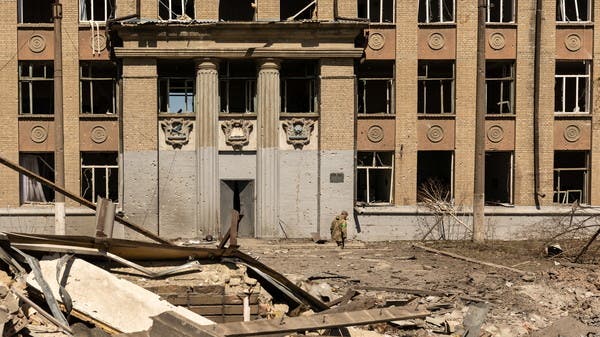 Russian forces sought to encircle Ukrainian troops in twin eastern cities straddling a river as President Volodymyr Zelenskiy warned that Moscow was seeking to destroy the industrial Donbas region where it has focused its attacks.

Russia is attempting to seize the separatist-claimed Donbas’ two provinces, Donetsk and Luhansk, and trap Ukrainian forces in a pocket on the main eastern front.

Musa Magomedov, a Ukrainian member of parliament, said Russian forces were shelling Avdiivka, a town just inside the Ukrainian-controlled part of Donetsk, “in totally inhuman fashion”.

“They are killing civilians and destroying the city we built up with such love,” Magomedov, the director of a coking plant in Avdiivka, said on Telegram.

Ukraine’s military general staff said Russia had intensified the use of aircraft to support ground forces because it lacked supplies of high-precision missiles.

“The situation in Donbas is extremely difficult. All the remaining strength of the Russian army is now concentrated on this region,” Zelenskiy said in a late Tuesday address.

“The occupiers want to destroy everything there.”

Russia’s defense ministry did not immediately respond to an emailed request for comment out-of-hours.

The easternmost part of the Ukrainian-held Donbas pocket, the city of Sievierodonetsk on the east bank of the Siverskiy Donets River and its twin Lysychansk, on the west bank, have become a pivotal battlefield. Russian forces were advancing from three directions to encircle them.

“The enemy has focused its efforts on carrying out an offensive in order to encircle Lysychansk and Sievierodonetsk,” said Serhiy Gaidai, governor of Luhansk province, where the two cities are among the last territory held by Ukraine.

Reuters could not immediately verify the information.

In a sign of Ukrainian success elsewhere, authorities in its second-largest city, Kharkiv, re-opened the underground metro, where thousands of civilians had sheltered for months under relentless bombardment.

The re-opening came after Ukraine pushed Russian forces largely out of artillery range of the northern city, as they did from the capital, Kyiv, in March.

Three months into the invasion, Russia still has only limited gains to show for its worst military losses in decades, while much of Ukraine has suffered devastation in the biggest attack on a European state since 1945.

More than 6.5 million people have fled abroad, uncounted thousands have been killed and cities have been reduced to rubble.

Situation in Ukraine’s Lugansk worse ‘with every hour’: Governor