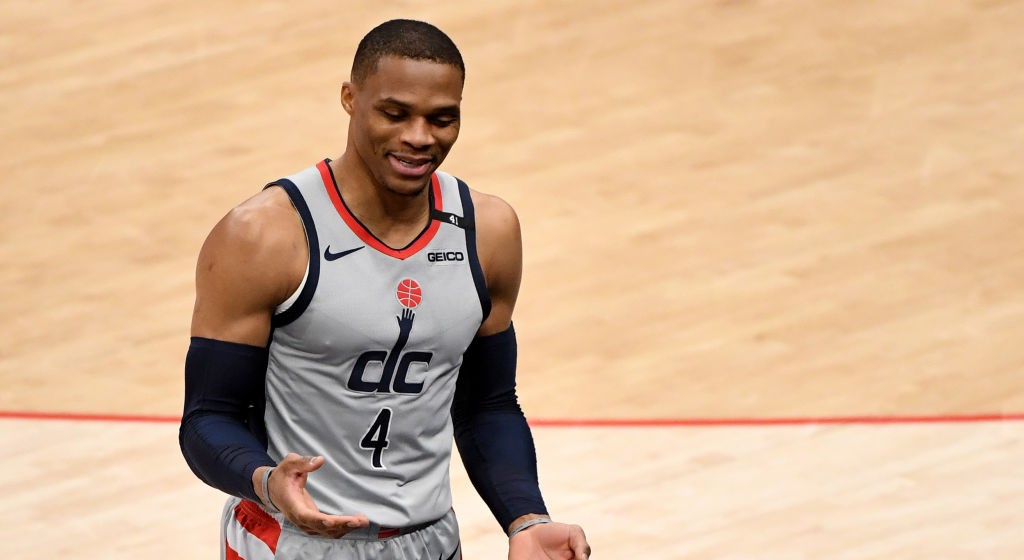 Russell Westbrook is currently on pace to average a triple-double for the fourth season out of the last five, as he continues to put up astronomical numbers in his first season with the Washington Wizards. On Monday, the Wizards had their eight game win streak snapped in overtime by the Spurs, but not for a lack of effort from Westbrook (22 points, 14 assists, 13 rebounds) and Bradley Beal (45 points).

It was Westbrook’s 29th triple-double in 54 appearances this season and his 175th overall, pulling him within seven triple-doubles of surpassing Oscar Robertson (181) for the most in NBA history. When Westbrook became the first since the Big O to average a triple-double for a full season, he was given MVP honors, but it has since become old hat for Russ to pile up the numbers. For some, they’ve no longer been impressed by his statistical accumulation, but what he’s doing is without a doubt historic and, recently, his massive output is lifting the Wizards to wins to climb into the play-in.

On Monday night, Westbrook was asked about his triple-doubles and people who don’t see them as incredibly valuable anymore and scoffed at that notion. As he pointed out, “if everybody could do it, they would do it” and noted that he feels sorry for anyone that can’t appreciate what he’s doing.

Russell Westbrook on triple-doubles: “There is no player like myself. And if people want to take it for granted, sorry for them. But I’m pretty sure if everybody could do it, they would do it. … Shit ain’t easy though, I’ll tell you that. It ain’t easy, I take a lot of pride.” pic.twitter.com/L5Rt7Ip2H9

“The thing is that, for me, I take pride in, like I said, every single night and leaving it all on the floor,” Westbrook said. “I honestly believe there is no player like myself, and if people want to take it for granted, sorry for them. But I’m pretty sure if everybody could do it, they would do it. I honestly make sure I impact the game in many ways every night — defending, rebounding, passing, assisting, whatever it is that my team needs me to do to win. And that’s what I do. I really don’t care what nobody thinks about it. I don’t care if somebody thinks it’s, whatever they call it, stat-padding or not useful. I think it’s very interesting that it’s not useful now that I’m doing it. It was useful when Magic and Oscar and those guys do it, but now that I do it and it looks easy. This shit ain’t easy though, I’ll tell you that. It ain’t easy. I take a lot of pride in my preparation. I take a lot of pride in taking care of my body. I take a lot of pride in competing every night. I don’t take nights off. I don’t cheat the game. So with that, I’m OK with the results of going out and competing, and if it’s a triple-double then shit why not? That’s my motto, why not? Keep going.”

Triple-doubles have certainly become more common in the modern game, as less restrictions are placed on guys playing inside the box of their position and allowed to do more, like rebounding as a guard or facilitating as a big, and as such nine of the top 21 on the all-time triple-doubles list are active players. Still, even factoring that in, what Russ does is truly unique. The truth is there are nights where his impact, even with a triple-double, isn’t what it maybe could or should be, but more often than not, his energy that leads to those prolific numbers is what helps carry his teams to wins. For whatever faults he has as a player, whether it be efficiency or over-eagerness defensively, he has always been part of winning teams even if not championship teams, and after a rocky start in Washington that’s proving true once again. He is, as he said, an incredibly unique player and that is certainly something to appreciate.