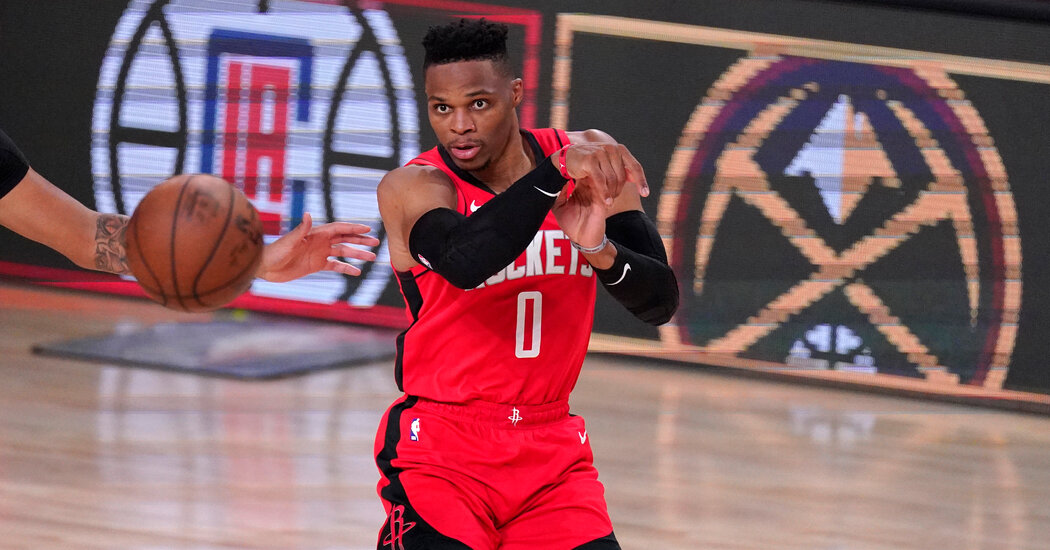 The Houston Rockets continued their franchise overhaul on Wednesday night by trading Russell Westbrook to the Washington Wizards for John Wall in a swap of disgruntled point guards.

The Rockets will also acquire a future first-round pick in the trade which they can receive as early as 2023.

There has been growing apprehension in Houston about the All-Star guard James Harden and his willingness to stay with the Rockets. But Houston remains intent on starting the season with Harden on the roster and hopes that the Wall acquisition can help re-establish a good relationship with him before management considers a trade, according to a person familiar with the Rockets’ thinking who was not authorized to discuss it publicly.

Westbrook joins the Rockets’ former coach Mike D’Antoni and their former general manager Daryl Morey on the list of high-profile departures since the Houston’s meek second-round playoff loss to the Los Angeles Lakers.

Wall has not played in almost two years because of left Achilles’ tendon woes, but the Wizards’ willingness to surrender a first-round pick persuaded Houston to make the trade after some initial reluctance to engage Washington. The Rockets previously explored a Westbrook deal with the Knicks and the Charlotte Hornets.

“The decision to part ways with John, one of the greatest players in franchise history, was extremely difficult,” Wizards General Manager Tommy Sheppard said in a statement. “What he has meant to our organization and our community is immeasurable and will not be forgotten.”

The trade reunites Westbrook, nine times an All-Star, and his former Oklahoma City Thunder coach Scott Brooks in Washington. Brooks, now the Wizards’ coach, has been a strong advocate for a Westbrook deal despite the limited trade market Houston had found for Westbrook, the N.B.A.’s 2016-17 Most Valuable Player Award winner.

Wall, a five-time All-Star who had spent his whole 10-season career with the Wizards, reunites in Houston with DeMarcus Cousins, his former college teammate at Kentucky and a close friend. The Rockets signed Cousins this week to a one-year, nonguaranteed contract in hopes that Cousins, 30, a four-time All-Star, can recover from the Achilles’ tendon and knee injuries that have plagued him for the past two years.

Both Westbrook, 32, and Wall, 30, have three seasons left on their contracts worth slightly more than $130 million.

The Rockets acquired Westbrook from Oklahoma City in July 2019 in a trade that cost Houston the veteran guard Chris Paul, two future first-round draft picks and the right to swap two additional first-round picks. Westbrook averaged 27.2 points, 7.9 rebounds and 7.0 assists as a Rocket, but the pairing with Harden fizzled in the playoffs.

D’Antoni and Morey abruptly walked away from their contracts shortly after Houston’s second-round elimination. D’Antoni wound up with the Nets as an assistant coach, and Morey is Philadelphia’s new president of basketball operations. The Rockets have since hired Stephen Silas as D’Antoni’s replacement and promoted the club’s longtime team counsel, Rafael Stone, to replace Morey — but reports of both Harden’s and Westbrook’s discontent with the direction of the franchise have been prevalent for weeks.

The trade will give both Westbrook and Wall an opportunity to start over. Westbrook not only gets to rekindle his partnership with Brooks but also form another All-Star backcourt tandem alongside Bradley Beal, who averaged 30.5 points per game last season. And Wall will now launch his comeback from what is widely regarded as the sport’s most dreaded injury alongside Harden.

The Nets’ Kevin Durant, himself trying to bounce back from an Achilles’ tendon injury like Wall, said this week that he has worked out with Wall in Los Angeles and said he “looked amazing to me.”