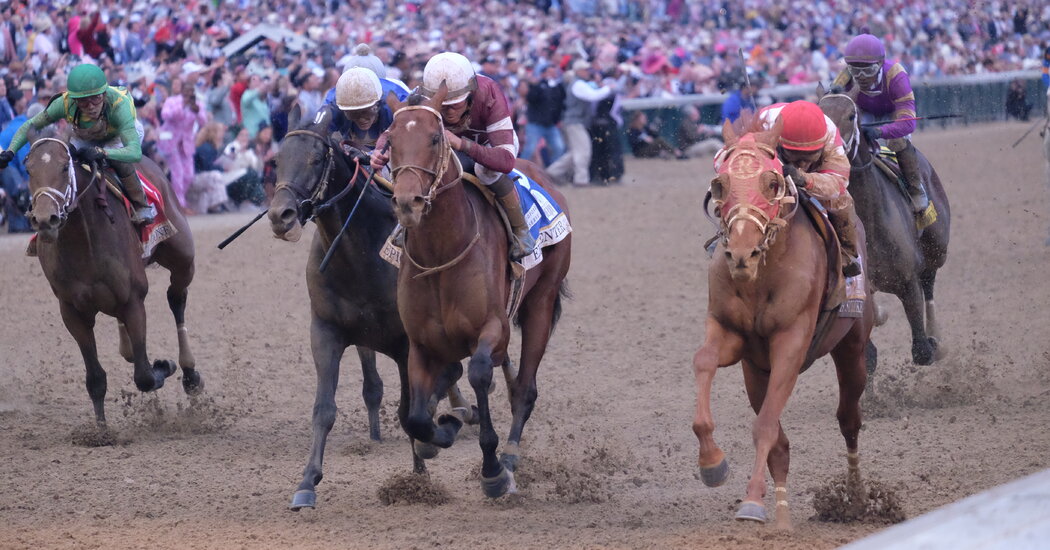 There will be no Triple Crown champion this year after the owner of the Kentucky Derby winner Rich Strike announced Thursday that his colt would skip the Preakness Stakes and run instead in the Belmont Stakes.

The owner, Rick Dawson, said Rich Strike came out of the Derby in fine shape on Saturday. But he said that he and the trainer, Eric Reed, had decided not to push the colt into the second leg of the Triple Crown in Baltimore on May 21 after only two weeks of rest, especially after winning America’s most famous horse race (and a legion of fans) as an 80-1 shot.

The colt did not even draw into the Derby field until the day before the race, when Ethereal Road was scratched.

“Our original plan for Rich Strike was contingent on the Kentucky Derby. Should we not run in the Derby we would point toward the Preakness,” Dawson said in a statement. “Should we run in the Derby, subject to the race outcome and the condition of our horse, we would give him more recovery time.”

Dawson said one possible plan was to run the horse, nicknamed Ritchie, in the Belmont Stakes in New York on June 11, but in any event to give him five to six weeks between races.

“Obviously, with our tremendous effort and win in the Derby, it’s very, very tempting to alter our course and run in the Preakness at Pimlico, which would be a great honor for all our group,” Dawson said. “However, after much discussion and consideration with my trainer, Eric Reed, and a few others, we are going to stay with our plan of what’s best for Ritchie is what’s best for our group, and pass on running in the Preakness, and point toward the Belmont in approximately five weeks.”

In a statement, Reed said of the horse: “What matters most is what’s best for him. We hate the decision we had to make but it was the right one.”

But Dawson and Reed had cautioned that sending Rich Strike to Baltimore was no sure thing. At Churchill Downs, the home of the Derby in Louisville, Ky., the colt was on a racetrack where he had won before (by 17 lengths). The track is conducive to Rich Strike’s late-closing style.

The Preakness is one-sixteenth of a mile shorter than the Derby, and the configuration of Pimlico Race Course features tighter turns and demands more agility.

There also figures to be far fewer horses than the 20 that showed up in Louisville and none is likely to set the same blistering early pace that complemented Rich Strike’s late turn of foot. In the Derby, the colt caught Epicenter and Zandon, who were tiring after tracking the early leaders.

The defection of Rich Strike means Epicenter, who finished second in the Derby and is committed to the Preakness, is now the likely favorite to win the second jewel in the Triple Crown.

The mile-and-a-half Belmont Stakes, with its big sweeping turns, should help Rich Strike turn in his best effort, especially after five weeks’ rest.

Or at least that is what Dawson and Reed are betting.

They proved canny when they set their sights on getting Rich Strike into the Derby, as did bettors who believed in the colt. Rich Strike paid $163.60 on a $2 bet to win. Only Donerail in 1913 had a higher payout, at $184.90.

Still, it is always disappointing for horse racing enthusiasts when a Triple Crown bid is not on the table. And Rich Strike had a particularly compelling back story that touched even those who are not fans of the sport.

He was purchased in a claiming race for $30,000. The colt is the only horse Dawson has in training. Rich Strike’s rider, Sonny Leon, a 32-year-old from Venezuela, also has a working-class pedigree. He was the 11th-ranked rider in the nation last year, but piled up those victories mostly at backwater tracks in Ohio. He had never won a graded stakes race before the Derby, and Dawson, Reed and Leon were all making their Derby debuts.

In 2019, Country House became the first Kentucky Derby winner to skip the second leg of the Triple Crown since Grindstone in 1996. Country House had finished second in the Derby but was elevated to first after racing officials disqualified Maximum Security, who crossed the line first, for interfering with several horses.

Bill Mott, who trained Country House, said the colt had developed a cough. The Derby turned out to be the colt’s last race. He now stands as a stallion in Kentucky.

Colin Kaepernick Is Working Out For The Raiders On Wednesday

Dallas Mavericks Save Season With Win Over Golden State