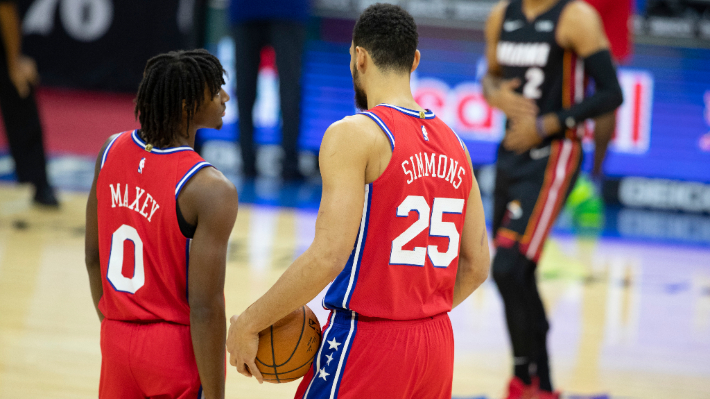 A report on Tuesday indicated that Ben Simmons let the Philadelphia 76ers know he has no intention of ever suiting up for the team again. After weeks of rumblings that a trade could be on the way, Simmons apparently met with the Sixers’ decision-makers and told them he wants out, going as far as saying he will not report to training camp.

Apparently, a potential Simmons trade might include another member of the roster. According to Jason Dumas of KRON4 News, Simmons’ agent, Rich Paul, would like it if Tyrese Maxey, who is also a Klutch client, also left the team.

Source: There’s a high chance th at Tyrese Maxey will be a part of any Ben Simmons trade.

Rich Paul would like both of his clients out of Philadelphia.

Dumas went on to say that Maxey has a handful of events with groups in the city that have been canceled, as Paul wants to make sure he’s gone before he has the opportunity to get fully established in Philly.

A few local Philadelphia based organizations had planned on partnering with Maxey on some community events. They were told to cancel those plans. Paul would not like Maxey to grow roots in Philly if he could be gone.

A former five-star recruit and a standout at the University of Kentucky, Maxey went to Philly with the No. 21 pick of the 2020 NBA Draft after a slight fall. While he faced a pretty common issue for rookies on a good team and didn’t get consistent run, he showed some pretty promising flashes and averaged eight points in 15.3 minutes per game.