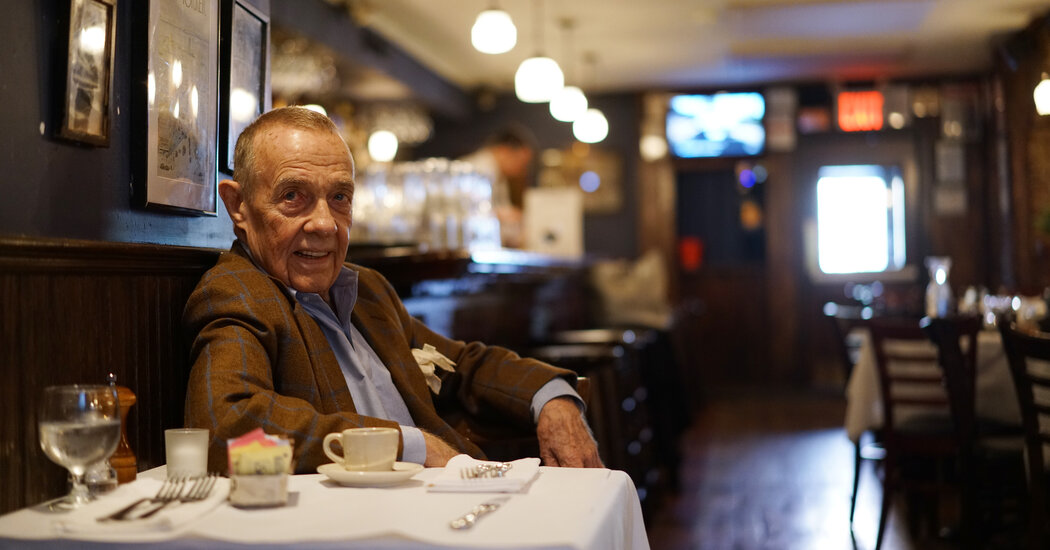 The coolest bar stool in Midtown just may be on the second floor of a townhouse on West 46th Street. There — before the pandemic — you could slip onto a zebra-print stool near a window, take in the theater crowd milling about outside on Restaurant Row and enjoy a cocktail among Broadway luminaries, in a bar that is perhaps Manhattan’s best homage to the buzzy New York nightclubs of yesteryear.

That place, Bar Centrale, has vintage black-and-white photographs, sleek booths, a few well-placed mementos hanging from the ceiling like those at the “21” Club, and a striking trompe l’oeil above the bar. It opened in 2005 and was a last hurrah of sorts for Joe Allen, the storied theater district restaurateur who died on Sunday, less than two weeks shy of his 88th birthday.

If you didn’t know Joe Allen, you might not have realized that he was, at times, sitting at the same bar as you, drinking Stella Artois or red wine. Largely reserved and comfortably dressed, he did not advertise himself. He didn’t need to.

He opened the restaurant Joe Allen, next door to Bar Centrale, in 1965, and later created Orso, which is directly below Bar Centrale. Over the years, he started various versions of his restaurants in the United States and abroad. But with Bar Centrale, he created a place where he might want to hang out — and did.

Joe was not infrequently likened to Humphrey Bogart, particularly to the Rick Blaine character Bogart played in “Casablanca.” And while Joe’s look, and sometimes his demeanor, were similar, he once told me that Lauren Bacall, a friend of Joe’s and a sometime investor in his restaurants, discounted the comparison to her husband.

Joe, who until this past year lived in an apartment in one of the three townhouses that house his restaurants, loved newspapers. For years, he regularly ate an early lunch alone at the Joe Allen bar while reading the papers. At night, he could occasionally be seen at the bar at Bar Centrale, or at a table eating dinner with the manager, Mary Hattman.

I’ve been going to Joe Allen for more than two decades, but I didn’t really get to meet the man until he opened Bar Centrale. We’d chat at the bar, and he’d invariably ask about something in the news. His interest in The Times was such that even the placement of the crossword puzzle interested him.

Joe tended not to talk about himself, but the more you hung out, the more you learned — from the décor, from other patrons and employees, and, once in a while, from Joe himself. You’d hear about how Daniel H. Lavezzo Jr., an owner of P.J. Clarke’s on the Upper East Side, started him on his career by giving him a bartending job in the 1950s. Not one easily impressed by the many celebrities who graced his restaurants, Joe still marveled about one evening at Clarke’s when he looked out on the floor and saw three customers at separate tables: Marilyn Monroe, Hubert Humphrey and Frank Costello.

One could also talk about the wonderful mix of star power at Joe’s current restaurants, though Joe — somewhat of an enigma to those who didn’t know him — was himself among the more interesting figures to grace them.

Even before Joe opened Joe Allen, he was a partner in an Upper East Side restaurant called Allen’s. If you watch the 1965 Jack Lemmon comedy “How to Murder Your Wife,” you’ll see a few shots of a handsome, dark-haired bartender there. That’s Joe.

Among the most vivid pictures on the wall at Bar Centrale is one of the great Chita Rivera onstage. The actress and dancer was among Joe’s long-ago love interests.

At his 80th birthday party in 2013, the many toasts included one from the gossip columnist Liz Smith, who declared that she had known Joe ever since he had been engaged to Elaine Stritch (they never married), and another from a long-ago lover who allowed how good Joe had been in bed. (That doesn’t happen at many 80th birthday parties.)

Joe always accommodated creative types as employees and customers. He was a link to a bygone era in New York when the restaurant owner was the frontman and when, at least it now seems, there was more time for owners and guests to chat.

He was also among the last of the well-known New York restaurateurs who came into their own in the 1960s — people like Elaine Kaufman, who ran Elaine’s, on the Upper East Side, for nearly five decades until her death in 2010.

I was good friends with Elaine, and after I learned that she and Joe had known each other for decades but hadn’t seen each other in years, I arranged to bring them together for lunch. That was about a dozen years ago.

We met at the P.J. Clarke’s on the West Side. A friend and I sat transfixed as Joe and Elaine reminisced for a couple of hours about old friends and customers.

Elaine asked whatever happened to an old acquaintance of theirs.

At one point Joe lifted his Stella, and Elaine her straight vodka. He offered a toast to the foresight they had both had early in their careers to try to avoid paying rent: “We bought our buildings!” he noted proudly.

Joe was among the speakers at Elaine’s memorial. Talking off the cuff, he gave a memorable tribute. Joe recalled how, on the night Elaine opened her place in 1963, he arrived with a gift: a case of Heineken. “Here you go,’’ he told her, putting it down on the bar. “Sell it back to me.’’

Joe was not morbid about death. He told me a few years ago that when you die doesn’t matter — “it’s how.” He had been in declining health and died peacefully on Sunday at an assisted living facility in New Hampshire, not far from where his children live.

His quiet end belies the indelible mark Joe left on the restaurant world, particularly in the theater district, where his three restaurants have temporarily closed during the pandemic. There, he remains as classic as the old black-and-white movies that continuously play without sound on a screen at Bar Centrale that you can see from the coolest bar stool in Midtown.