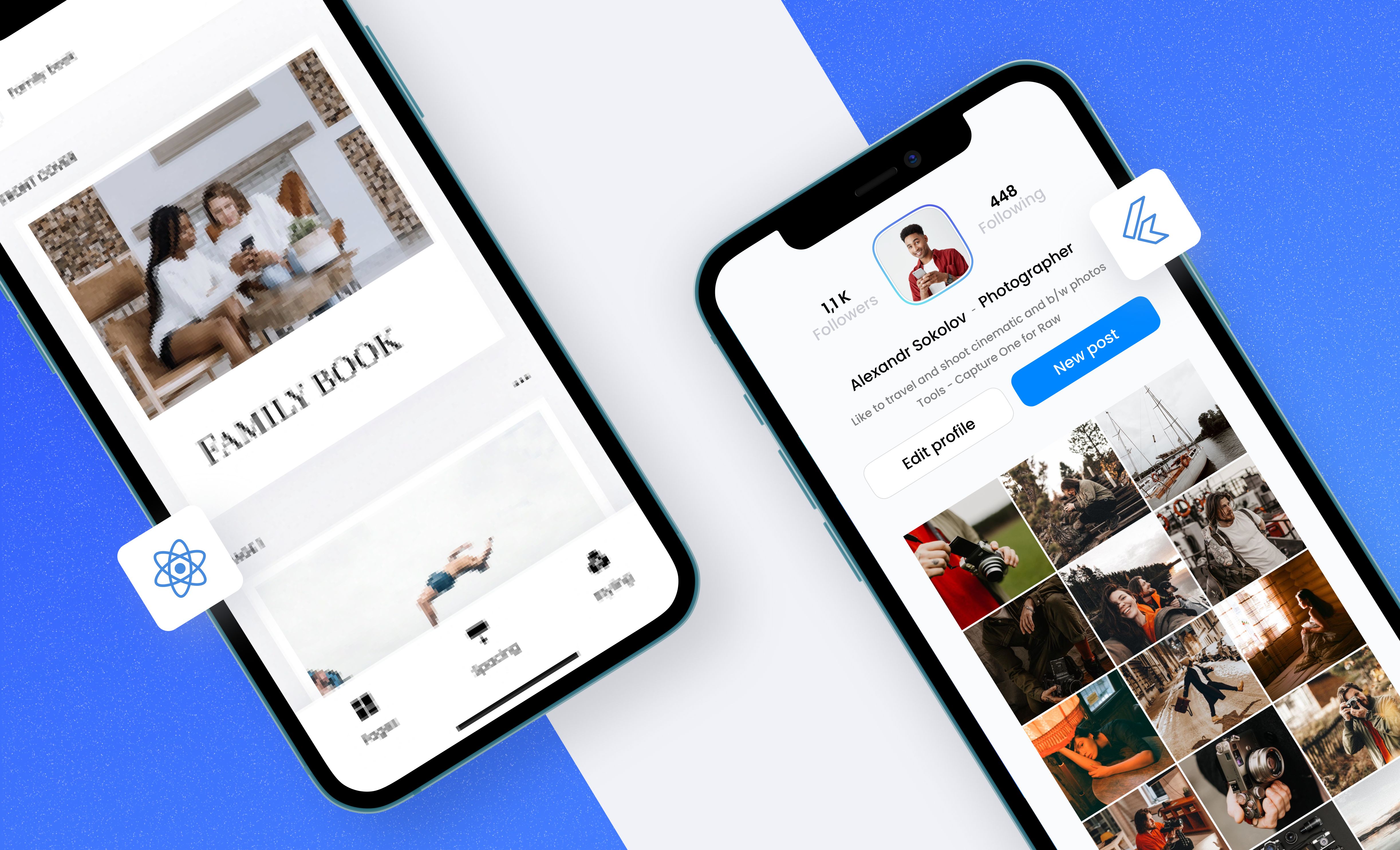 The aim of this article is to provide the readers with complete information on the two cross-platform frameworks for mobile app development – React Native and Flutter.

These technologies have proved to be the most popular among developers, as reflected in the diagram provided by Statista. In the article, React Native and Flutter are compared on criteria called to simplify the choice of the best tool for developing your next digital product.

This debate is extremely relevant nowadays as the popularity of mobile applications is growing day after day opening more and more prospects for businesses and their owners.

If you want your business to stay competitive in the market, you will definitely need an app or a couple of apps. The more platforms your app is available on, the higher the chances of your success are. That is why app development using cross-platform technologies is so much in demand. They provide the opportunities to kill two birds with one stone making your app available on multiple platforms and allowing more people to know about your business.

Why the comparison between Flutter and React Native?

Frankly speaking, the issue of which one is better: Flutter or React Native is not new. This topic has already been discussed for quite a while, but the solution hasn’t been found yet.

That is why the question “which tool is better” can hardly have a definite answer. Both frameworks have their pros and cons, as well as their own community of followers. But we hope that after reading this article, you will have a better understanding of Flutter and React Native and break down the nuances of these hybrid technologies. And perhaps be more likely to choose your favorite tool.

A few words about Flutter

Flutter is an open-source, cross-platform SDK (software development kit) created by Google. Although it is a quite new framework (it was released in 2017), Flutter managed to gain popularity among developers very quickly.

Flutter uses the Dart programming language, which was also developed by Google. One of the most outstanding features of Flutter is its abundance of versatile widgets, which help to build apps with impressive UI. A detailed description of all useful features and functionalities of Flutter was described in this article.

A few words about React Native

React Native was developed by Facebook, which is why most of the apps from the Facebook family-like Skype, Instagram have been created using this tool. The programming languages used by React Native are JavaScript and React.js, which is a great advantage for software engineers since they don’t have to master new tools from scratch.

Compared to Flutter, React Native has seen the world a little longer as it was released in 2015. The major benefits of React Native are vast libraries along with a great number of training guides.

So now, let’s have a closer look at these cross-platform frameworks and highlight their pros and cons as well as the aspects they have in common. In this article, we are going to compare each of the frameworks according to 8 criteria:

The support of native-like components is extremely important for the development of a cross-platform mobile app, as, without it, the app won’t feel like a native one. Flutter is bundled with a real army of highly customizable widgets, which help to create as much of an app as you can imagine. Moreover, Flutter is armed with a rich number of elements such as UI rendering components, device API access, navigation, testing, and loads of libraries.

It is impossible to predict how long it will take to build an application. This period can vary from several months to a couple of years. The choice of the platform does not really influence the release speed. However, working with simple Flutter applications can be more profitable and faster due to a large number of components out of the box. Flutter also allows using native code so your application can seem native.

The development process for React Native apps is also fast since the framework uses native components, which are ready to use.  These components help to speed up the process of mobile app development, eliciting many pains.

But the most valuable feature of both frameworks is the Hot Reload function, which allows developers to introduce changes to an existing state of the app without having to recompile all of the code from the start, which improves efficiency and accelerates the whole process.

So we can conclude that in terms of development speed both frameworks are great.

Advertisement
and Redux. While the former is created by Facebook, the latter is more popular with developers. Both of these structures follow a unidirectional pattern of data flow during development and provide the storage of application state in a central “store”, making app components stateless.
Advertisement

Since Flutter is relatively new to the world of cross-platform application development, most developers find it hard to figure out what architecture is the best option to implement in an application. Flutter offers a number of architectural patterns; each is highly reliable and convenient to work with. The most popular solution is BLoC (Business Logic Component). At the same time, Flutter makes it possible to use Flux or Redux if you find these architecture samples more convenient.

The React Native architecture consists of two main parts: the JavaScript language and the native language. In the beginning, it only uses JS. But for the interpretation and rendering of UI components, it must use the JavaScript bridge as it helps to convert the variables to native ones.  So, yes, React Native is powerful, but the necessity of using a bridge makes the performance slower and influences the animations’ speed.

Flutter, on the other hand, goes a bit behind and the main reason for that is the use of the Dart programming language. Flutter compiles the whole code to the native machine code and avoids any special connection between the interface and the code. This makes rendering incredibly fast and results in better and quicker performance.

Let’s look at the operational principles of Flutter and React Native frameworks on the scheme below.

Well-structured documentation and a user-friendly set of tools are essential for software developers. In terms of documentation, Flutter surpasses React Native as it is supplied by sophisticated and thought-out documentation by Google. Flutter developers can find any information in seconds. Although it is a relatively new framework, Flutter is quite easy to switch because Dart is similar to Java and Kotlin programming languages.

So it’s not a big deal for a Java developer for instance to start using Flutter for the development of mobile apps.

What concerns React Native? It would be reasonable to state that it doesn’t provide such thorough and full-scale documentation as Flutter in spite of the fact that React Native is “older”. Nevertheless, React Native can boast a vast community of users and loads of useful guides, which provide opportunities to find necessary solutions in no time.

One of the essential issues influencing the reliability of a framework is the community making fundamental contributions to the overall framework advancement. As React Native was released earlier, it is not surprising that it has got a much bigger community of followers, who can share the knowledge on some new technologies with less experienced developers as well as offer help in solving various problems. Since its release in 2015, the React Native community has significantly expanded, and the interest in this framework only keeps growing.

As a younger framework, Flutter (released in 2017) can’t boast such a vast community but from the very beginning, it was actively supported by Google software engineers. At the moment, Flutter has got quite a big fan base, and since the release of a new stable version, the popularity of Flutter is sure to increase at a blazing speed.

React Native and Flutter are cross-platform technologies, which means that the testing time is cut in half. It also makes the QA team easier to work with because they only need to test one application. But surely, if these are different applications on different platforms, they have to be tested.

Developers have all JavaScript frameworks available for testing React Native apps at the unit level. However, when it comes to UI testing and automation, the situation is not as good.

When approaching the issue of choosing a platform for hybrid app development, you need to analyze a lot of factors such as the budget, time, app size, platforms, and so on. This means that choosing the best solution for mobile development will mostly depend on the specific task. However, many experts agree that the expanding interest in Flutter, its use, and support from Google will eventually end up in its leadership. On the other hand, the strong support of the React Native community, its stability, and reliability also make this platform very popular and actively used.

To sum let’s briefly go through the most important features of both technologies:

So, for the time being, neither Flutter nor React Native can boast of superiority since both technologies have their strengths and weaknesses.

Yes, React Native is a more robust cross-platform tool using one of the most popular programming languages, JavaScript. However, Flutter is developing faster, perfectly adapting to the needs of today’s technology world, and is becoming more and more popular with software developers every day.

Hopefully, now that you know enough about each platform, you can make an informed decision and choose the one that best suits your needs and expectations.